On Thursday the notorious Steele dossier about alleged Russian influence on President Donald Trump was officially debunked as unverified “internet rumor”. On the very same day another case, in which Russia was accused of being behind a murder in Ukraine, fell apart.

On July 20 2016 a remote controlled bomb was used to blow up a car in Kiev and to kill its driver:

The blast threw the driver, Pavel G. Sheremet, a prominent journalist, into the back seat. The vehicle stopped then rolled backward, and for a moment, he seemed to be struggling to crawl free of the wreckage, closed circuit video showed.

Mr. Sheremet, 44, a onetime employee of Russian state television turned critic of the Kremlin, was among several prominent journalists who had moved from Russia to Ukraine, where restrictions on the news media are looser.

Sheremet was the 14th journalist killed in Ukraine after the U.S. directed coup against its elected president and government. It was quite obvious that the extreme right in Ukraine, which had come to power during the coup, was behind the murder campaign:

As recently as May, Ukraine was rocked by a big scandal after the personal data of more than 4,000 media staff were posted online by Ukrainian ‘witch-hunting’ website Mirotvorets supported by the aide to Ukraine’s interior minister. The employees were accused by pro-Kiev activists of “collaborating with terrorists” for their reporting from war-torn eastern Ukraine.

Sheremet and the other killed journalists were on that list.

Western media largely ignored the anti-press murder campaign in Ukraine which was run by the fascist paramilitary Right Sector.

Instead, their reports on Sheremet peddled hints that Russia was behind the murder. The New York Times wrote at that time:

By the afternoon, President Petro O. Poroshenko called an emergency meeting of his national security staff and strongly hinted that Russia had been behind the brazen assassination.

“It seems this was an act done with the intention of destabilizing the situation in the country,” Mr. Poroshenko said. “In the conditions of war and aggression, I am not excluding the possibility of some foreign interest here.”

Zoryan Shkiryak, an aide to the interior minister, said investigators suspected a homemade explosive device of 400-600 grams of TNT equivalent that was possibly detonated remotely.

Shkiryak said the likely motive was Sheremet’s professional activities, but added that investigators were considering personal conflicts and the “involvement of Russian special services”.

Hours after the killing, Ukrainian President Petro Poroshenko said on television, “It seems to me this was done with one aim in mind: to destabilize the situation in the country,” Reuters reports.

Sheremet later said he no longer felt safe in Russia. Five years ago, he moved to Kiev. In an interview with Reuters in October, he said, “I’m threatened often and given hints. Every time I go to Moscow, it’s like I’m in a minefield.”

Following the death of Pavel Sheremet a number of similar assassinations occurred in Kiev which were again blamed on Russia.

Then came the murder of Arkady Babchenko which was again widely blamed on Russia. 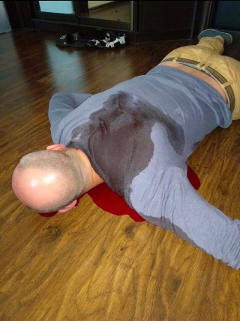 Even after it turned out that the internal Ukrainian security service SBU had faked the story and that Babchenko was alive and well, ‘western’ media repeated the SBU’s lunatic claims that it had to fake the murder to reveal that Russia was behind a different real one. It later turned out that the whole case was faked as a cover for a corporate raid.

Throughout the three years after Sheremet’s death the Ukrainian President Poroshenko stalled the investigation into the murder case. Under the new President Zelensky the investigation was revived. Two days ago the last of five suspects were detained:

The organizer of the murder of journalist Pavel Sheremet in 2016 was musician and Anti-Terrorist Operation (ATO) veteran Andriy Antonenko. The direct executor of the killing was the volunteer and children’s physician Yulia Kuzmenko, according to the text of the suspicion notice handed to Kuzmenko during a search of her house on Thursday, December 12.

A scan copy of the suspicion was published by her attorney Vlad Dobos on his Facebook page on Friday night.

“The pretrial investigation found that Antonenko … carried away by ultranationalist ideas, cultivating the greatness of the Aryan race … trying to make his views an object of public attention … remaining in the ATO area, from among volunteers and persons who had undergone military training as part of volunteer battalions … decided to create an organized group in order to kill journalist and radio host Sheremet Pavel Grigoryevich,” the text of the suspicion notice says.

All of the involved people are rightwing extremists. Antonenko was known to then President Poroshenko:

Antonenko, a muscular conflict veteran whose body is covered in tattoos, authored a song whose title translates as Came Quietly, Left Quietly, and which has been described as the unofficial anthem of the Special Operations Forces, a branch of Ukraine’s military.

“From the first days of the war, Andriy assisted the army as a volunteer. The fighters of the Special Operations Forces (SOF) know Andriy well. And the song that he dedicated to the fighters of the SOF is known by heart,” Poroshenko said in a Facebook post on July 29, 2017 that linked to a video of the song.

The female doctor, who allegedly pressed the remote control button to kill Sheremet, is also a coup supporting extremist:

Among Antonenko’s Facebook friends is Kuzmenko, a 40-year-old doctor at a children’s hospital in Kyiv. Kuzmenko volunteered to treat protesters who thronged Kyiv’s central square and faced off against law enforcement during the Euromaidan uprising that pushed Moscow-friendly President Viktor Yanukovych from power in February 2014.

Her Facebook page is filled with photos of herself in the field with soldiers and pro-Kyiv fighters,

including some from Right Sector, a far-right Ukrainian paramilitary group.

Then there is the Right Sector couple that allegedly built the bomb:

Kuzmenko had recently been attending the trial of Vladyslav and Inna Hryshchenko, a couple who were detained earlier this year on charges of attempting to kill a businessman in western Ukraine by blowing up his car. The bomb fell off the car and failed to go off, authorities say.

The Hryshchenkos are now among the five suspects in Sheremet’s killing. Law enforcement authorities said that the bombs used in the two cases were similar and that Vladyslav Hryshchenko is an explosives expert with six past convictions for extortion and robbery.

The two met while fighting among Right Sector forces in the province of Donetsk and later married.

The fifth person detained in the case is Yana Duhar, a nurse in a paratrooper battalion, who reconnoitered the area around Sheremet’s house.

Russia had most likely nothing to do with any of the assassinations in the Ukraine that it was accused of. In most cases it is likely that the ruthless fascist of the Right Sector, which maintained the Mirotvorets kill list, were the culprits. Ukrainian oligarchs used them to eliminate their enemies and rivals. President Porochenko protected them.

It is good to see that this has changed under the new President Zelensky. ‘Western’ media should follow his example and do some real reporting about the fascist influence in Ukraine instead of blaming Russia of everything bad that happens there. After the catastrophic coverage of Russiagate it is high time for such a change.