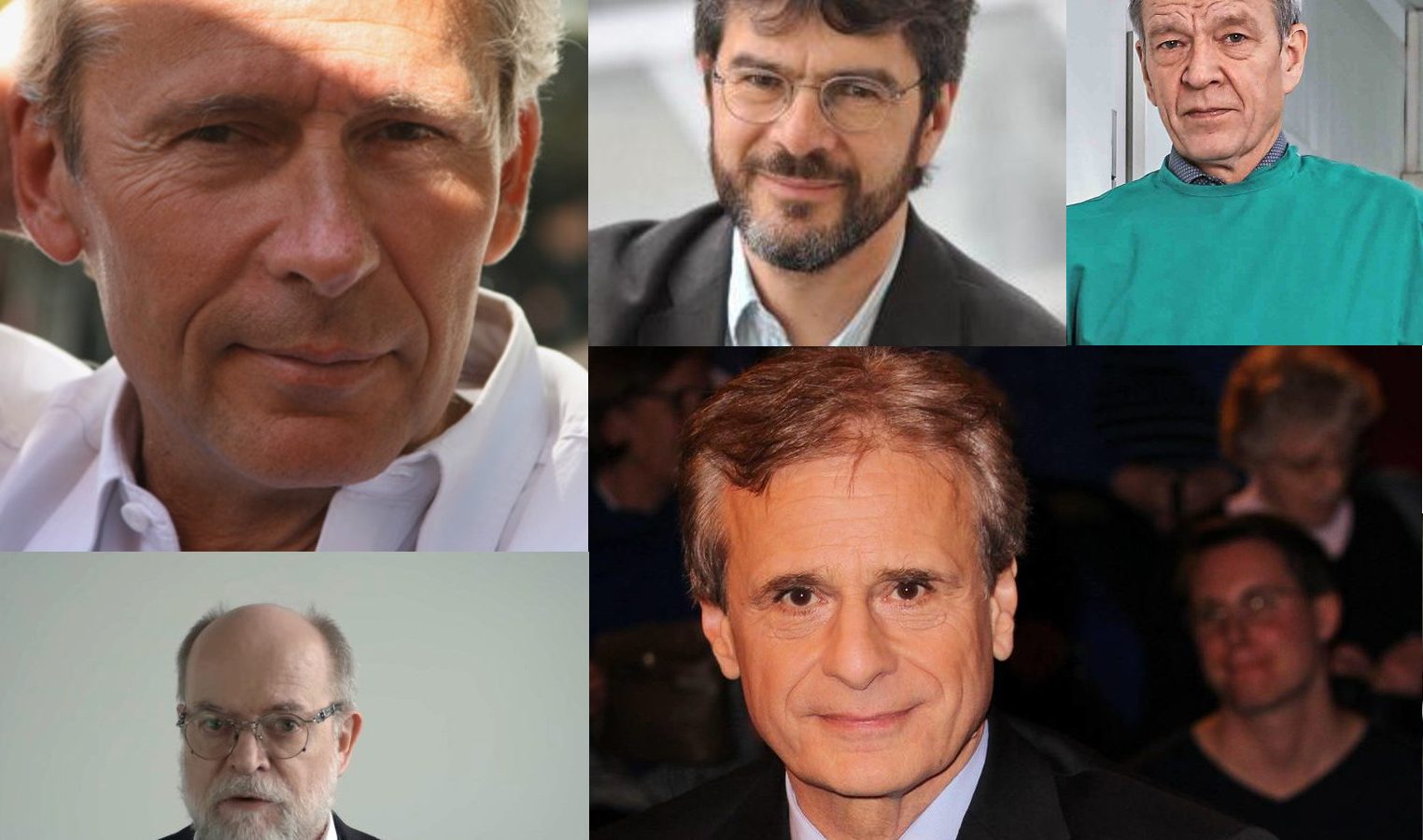 Our third batch of Medical experts dissenting from the media/political “consensus”.

Dr John Lee is an English consultant histopathologist at Rotherham General Hospital and formerly clinical professor of pathology at Hull York Medical School. He is most notable to the wider public as co-presenter (with Gunther von Hagens) of Anatomy for Beginners (screened in the UK on Channel 4 in 2005), Autopsy: Life and Death (Channel 4, 2006) and Autopsy: Emergency Room (Channel 4, 2007).

But there’s another, potentially even more serious problem: the way that deaths are recorded. If someone dies of a respiratory infection in the UK, the specific cause of the infection is not usually recorded, unless the illness is a rare ‘notifiable disease’.

So the vast majority of respiratory deaths in the UK are recorded as bronchopneumonia, pneumonia, old age or a similar designation. We don’t really test for flu, or other seasonal infections. If the patient has, say, cancer, motor neurone disease or another serious disease, this will be recorded as the cause of death, even if the final illness was a respiratory infection. This means UK certifications normally under-record deaths due to respiratory infections.

Now look at what has happened since the emergence of Covid-19. The list of notifiable diseases has been updated. This list — as well as containing smallpox (which has been extinct for many years) and conditions such as anthrax, brucellosis, plague and rabies (which most UK doctors will never see in their entire careers) — has now been amended to include Covid-19. But not flu. That means every positive test for Covid-19 must be notified, in a way that it just would not be for flu or most other infections.

– How deadly is the coronavirus? It’s still far from clear, The Specator, 28th March 2020

Few tests have been carried out in patients with mild symptoms. This means that the number of positive tests will be far lower than the number of people who have had the disease. Sir Patrick Vallance, the government’s chief scientific adviser, has been trying to stress this.

He suggested that the real figure for the number of cases could be 10 to 20 times higher than the official figure. If he’s right, the headline death rate due to this virus will be 10 to 20 times lower than it appears to be from the published figures.

All develop chest infections and die. All test positive for Covid-19. Yet all were vulnerable to death by chest infection from any infective cause (including the flu).

– How to understand & report figures for ‘Covid deaths’, The Spectator, 29th March 2020

Dr. John Oxford is an English virologist and Professor at Queen Mary, University of London. He is a leading expert on influenza, including bird flu and the 1918 Spanish Influenza, and HIV/AIDS.

Personally, I would say the best advice is to spend less time watching TV news which is sensational and not very good. Personally, I view this Covid outbreak as akin to a bad winter influenza epidemic. In this case we have had 8000 deaths this last year in the ‘at risk’ groups viz over 65% people with heart disease etc. I do not feel this current Covid will exceed this number. We are suffering from a media epidemic!

Prof Knut Wittkowski is German-American researcher and professor of epidemiology. He worked for 15 on the Epidemiology of HIV before heading for 20 years the Department of Biostatistics, Epidemiology, and Research Design at The Rockefeller University, New York.
What he says:

With all respiratory diseases, the only thing that stops the disease is herd immunity. About 80% of the people need to have had contact with the virus, and the majority of them won’t even have recognized that they were infected, or they had very, very mild symptoms, especially if they are children. So, it’s very important to keep the schools open and kids mingling to spread the virus to get herd immunity as fast as possible.
[…]
We are experiencing all sorts of counterproductive consequences of not well-thought-through policy
[…]
I have been an epidemiologist for 35 years, and I have been modeling epidemics for 35 years. It’s a pleasure to have the ability to help people to understand, but it’s a struggle to get heard.

Dr Klaus Püschel is German forensic pathologist and former professor of forensics at Essen University and current director of the Institute of Forensic Medicine at the University Medical Center Hamburg-Eppendorf. He has worked on many noteworthy autopsies, as well high-profile forensic archaeological studies.

Contrary to the guidelines of the Robert Koch Institute, his office in Hamburg has started to differentiate between deaths with and from coronavirus, which led to a decrease in Covid19 deaths.

All those we have examined so far had cancer, a chronic lung disease, were heavy smokers or severely obese, suffered from diabetes or had a cardiovascular disease. The virus was the last straw that broke the camel’s back, so to speak […] Covid-19 is a fatal disease only in exceptional cases, but in most cases it is a predominantly harmless viral infection.

In quite a few cases, we have also found that the current corona infection has nothing whatsoever to do with the fatal outcome because other causes of death are present, for example, a brain haemorrhage or a heart attack. [Covid19 is] not particularly dangerous viral disease […] All speculations about individual deaths that have not been expertly examined only fuel anxiety.

It’s impossible to wait for a vaccine […] The quickest we could have a vaccine ready is in six months. Based on experience, I’d say the reality is closer to a year. We can’t stay under lockdown for six months to a year. If we did that our society and our culture would be ruined.
[…]
People under 50 are very, very unlikely to die or get seriously ill from the coronavirus. We have to let them get infected so they can develop immunity.

– “‘Infect the young and isolate those at risk’ – One German scientist’s plan to end the lockdown”, The Times, 11th April 2020

[The coronvirus test] is a PCA-based test, where false positives are programmed in.

Half of [the positive tests] could be wrong. PCA tests often show false positives. You can ask professor Gigerenzer in Berlin about this problem area. The tests are very sensitive. If you have only one molecule of something, the test can show positive. That doesn’t mean the patient is sick, or that he has the coronavirus; it doesn’t get isolated, but one relie wholly on these tests.

But the spreading panic is in large parts founded on new from Italy. And nowadays one doesn’t know how much of it is fake news. I have seen Italian doctors online, where I have compelling suspicions something isn’t right with what they say.

I am a clinician and I don’t see a new disease on the horizon. If you took away the test, life would go on as before, there wouldn’t be anything to see.

We have to keep these serious social measures as short and as low as possible, because they could potentially cause more illnesses and deaths than the coronavirus itself.

Although my focus is on infectious diseases, I believe that it is imperative that we consider the impact on other areas of health and society. We as a society must not focus solely on the victims of the corona virus.

We know that unemployment, for example, causes illness and even increased mortality. It can also drive people into suicide. Restricting freedom of movement is likely to have a further negative impact on public health.

It is not so easy to calculate such consequences directly, but they still happen and they can possibly be more serious than the consequences of the infections themselves.

Dr Gerd Gigerenzer is a German psychologist, professor of psychology and Director of the Harding Center for Risk Literacy at the Max Planck Institute for Human Development in Berlin.
What he says:

The 2009 swine flu epidemic killed hundreds of thousands, mostly in Africa and Southeast Asia. But in Europe, where the threat was comparatively small, the media updated the death toll and the number of suspected cases on a daily basis. In the United Kingdom, the government predicted that as many as 65,000 citizens might die from the disease. In the end, fewer than 500 died.

Predictably, such daily accounting triggered fear and led politicians to make hasty, ill-advised decisions – such as stockpiling medication – without examining the evidence.

Predictably, such daily accounting triggered fear and led politicians to make hasty, ill-advised decisions – such as stockpiling medication – without examining the evidence. All eyes were focused on the new, unknown virus, and not on protecting people from more lethal threats, such as seasonal influenza, which in 2009 killed orders of magnitude more people than swine flu. It still does – as would be clear if the media bombarded us with hourly updates of the flu-related death toll.

Similarly, millions of people, particularly in developing countries, die from malaria and tuberculosis each year. And in the United States alone, hospital-acquired infections kill some 99,000 patients annually. Yet, these unlucky people get next to no attention.

Why are we more scared of what is less likely to kill us?

[W]hen swine flu spread, many governments followed the World Health Organization’s advice and stockpiled Tamiflu, a medication that was marketed to protect against the severe consequences of flu. Yet, many expert advisers to the WHO had financial ties to drug manufacturers, and there is still no evidence that Tamiflu is effective. The US wasted over $1 billion, and the UK over £400,000 ($522,000), on this medication – money that instead could have been invested in improving health care.

– Why What Does Not Kill Us Makes Us Panic, Project Syndicate, 12th March 2020

BONUS: Dr Pietro Vernazza of Switzerland was featured in our first “experts list”, but he has since written four more articles on various aspects of the coronavirus, including testing programs, medical masks and if closing schools may be counter-productive.

If you can find any other examples of noteworthy experts deviating from the mainstream narrative, please post them below. As always, this list have been impossible to build without Swiss Propaganda Research. Follow their work and share widely. An indispensable resource.