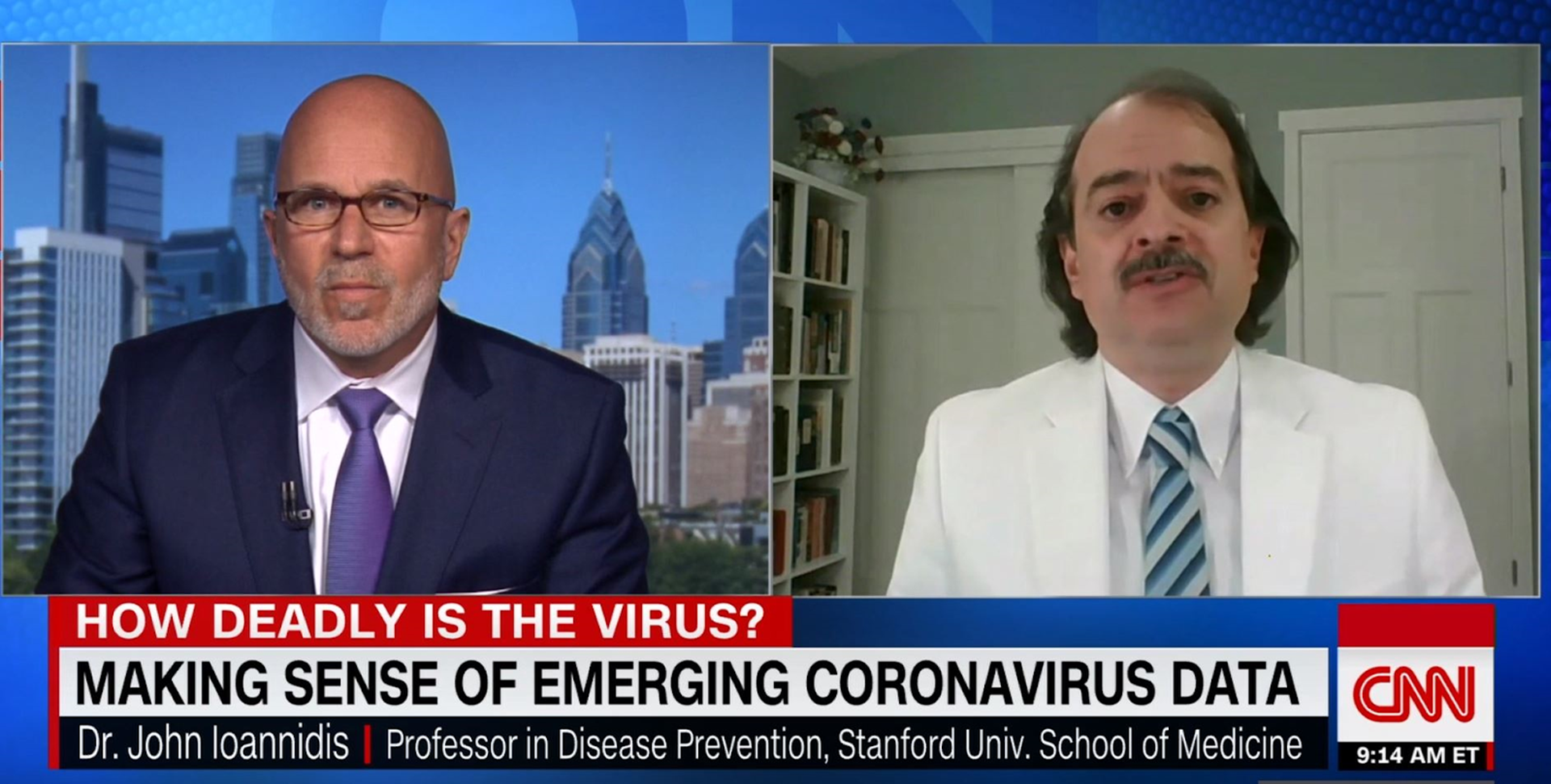 In 2010, The Atlantic said that Dr. John Ioannidis “may be one of the most influential scientists alive.”

The article, written by David H. Freedman, made it clear the Greek-American physician-scientist’s rising star stemmed in part from the fearlessness he demonstrated in challenging bad science in the medical research field.

“[Ioannidis is] what’s known as a meta-researcher, and he’s become one of the world’s foremost experts on the credibility of medical research,” Freedman wrote. “He and his team have shown, again and again, and in many different ways, that much of what biomedical researchers conclude in published studies—conclusions that doctors keep in mind when they prescribe antibiotics or blood-pressure medication, or when they advise us to consume more fiber or less meat, or when they recommend surgery for heart disease or back pain—is misleading, exaggerated, and often flat-out wrong.”

Today, Ioannidis is the C.F. Rehnborg Chair in Disease Prevention at Stanford University. He has authored some of the most cited medical journal articles in history.

Ten years after his glowing profile in The Atlantic, however, Ioannidis finds himself in the crosshairs of media and medical professionals for doing what he’s always done: challenging science he believes is flawed. This time, however, Ioannidis is challenging medical findings of a virus that isn’t just deadly, but deeply controversial.

It began with a March 17 article in Stat that suggested governments around the world were taking sweeping and potentially harmful actions to limit the spread of COVID-19 without sufficient data. Then came a May 5 white paper he authored which suggested COVID-19 was not nearly as deadly as initially feared, a claim later supported by an NPR report that cited research from Johns Hopkins University showing a fatality risk as low as 0.5 percent. Ioannidis’s latest research on the COVID fatality rate pegs the median COVID-19 fatality risk at 0.25 percent, much lower than previous estimates but still about two and a half times higher than the seasonal flu.

Ioannidis’s credentials might be impeccable, but his findings have not been without controversy.

In an impressive piece of medical journalism published at Undark.org, investigative journalist Jeanne Lenzer and Shannon Brownlee of the Lown Institute detail the withering criticism Ioannidis has received from media and medical professionals alike.

Ioannidis appears unfazed by the attacks, which include (very thin) accusations that his study suffered from an undisclosed conflict of interest.

In the medical journal BMJ, Ioannidis recently explained why he believes government lockdowns should be lifted. (An opposing view is offered by Edward R. Melnick of the Yale Medical School.)

Even if covid-19 is far milder than feared, it can still devastate in specific settings. Massacres in overwhelmed hospitals with contaminated personnel and in nursing homes represent the lion’s share of deaths. Hospital preparedness, universal personnel screening, draconian infection control, and social distancing in these locations are indispensable.

However, blind lockdown of entire populations has questionable added benefits. Locking down healthy, no-risk people and transferring covid-19 patients to nursing homes was absurd. Proponents of “lockdown to flatten the curve” should acknowledge that this gains time for hospital preparedness but that most, if not all, covid-19 deaths will still happen when measures are relaxed—unless effective treatments and/or vaccines emerge. Moreover, the lockdown-to-flatten-the-curve rationale ignores seasonality and espouses 100 year old observational data from a 1918 pandemic with an infection fatality rate 100 times higher than covid-19.

Lockdowns have multiple components. Some, such as avoiding mass gatherings, may work; others may not. Some may even increase the number of covid-19 deaths—for instance, school closures may increase frail relatives’ exposure to children. But, regardless of the combination, lockdowns bring multifarious harms beyond those related to the SARS-CoV-2 virus, such as the consequences of health system dysfunction and extended harms eroding health, the economy, and society at large.

Under lockdown conditions many patients with acute, treatable conditions (such as coronary syndromes) avoid seeking care. This disruption may be seen in the excess deaths accruing so far in the covid-19 lockdown. Patients with cancer whose treatment is delayed have worse outcomes. And when patients avoid hospitals many health systems suffer financially, furlough personnel, and cut services. Covid-19 overwhelmed a few dozen hospitals, but covid-19 countermeasures have already jeopardized thousands of them.

Underprivileged populations and those in need are hit harder by crises. People at risk of starvation worldwide have already exceeded one billion. We are risking increased suicides, domestic violence, and child abuse. Malaise and societal disintegration may also advance, with chaotic consequences such as riots and wars.

And how long a lockdown is enough? If we open now, will lockdown recur in autumn? Next year? Whenever authoritarianism so wishes? No dictatorship could imagine a better precedent for absolute control.

Lockdowns were desperate, defendable choices when we knew little about covid-19. But, now that we know more, we should avoid exaggeration. We should carefully and gradually remove lockdown measures, with data driven feedback on bed capacity and prevalence/incidence indicators. Otherwise, prolonged lockdowns may become mass suicide.

As Undark points out, Ioannidis’s opposition to lockdowns do not stem from libertarianism or a “Trumpian desire to benefit Wall Street,” but a longstanding skepticism of medical interventionism generally, which he says tends to be missed or downplayed by medical researchers.

Ioannidis may be no libertarian, but many of the lockdown themes he touches will sound familiar to FEE readers—deadly government policies that prohibited nursing homes from screening for COVID-19, soaring suicide, and widespread economic destruction resulting in millions of businesses wiped out and 40 million jobs lost.

While the costs of the lockdowns are apparent to all, less clear is how effective they have been in limiting the spread of the virus. A recent Bloomberg found “little correlation between the severity of a nation’s restrictions and whether it managed to curb excess fatalities.” Norway’s top health official recently stated the lockdowns probably were not necessary. Evidence from a recent JP Morgan report suggests most nations saw COVID infection rates fall after lockdowns were lifted.

These results make sense when one realizes, as studies have shown, that Americans were social distancing before lockdown orders were enforced. This fact brings to mind a quote from Nobel laureate economist F.A. Hayek.

Hayek’s point was that centralized planning tends to be irrational because central planners lack the knowledge to make rational decisions. We mustn’t forget that human beings by nature and self-interest will take reasonable steps to protect themselves from a deadly virus. Humans manage risk every single day, and each does so possessing and processing more local knowledge than any central planner can possess.

Government officials no doubt were acting in good faith when they ordered lockdowns, but by removing choices from individuals, businesses, and other organizations they committed what appears to be one of the most costly and ultimately lethal blunders in modern history.

It’s not too late to learn from the mistake. A first step toward that end would be to admit that John Ioannidis is right: The government lockdowns must end.