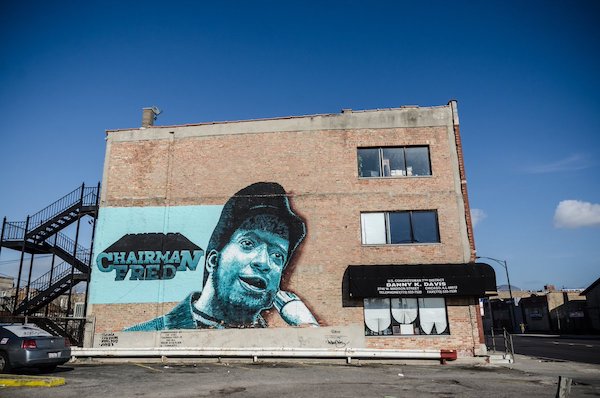 Had he not been assassinated in a police fusilade on a bitterly cold Chicago evening 47 years ago, Fred Hampton would’ve turned 68 years old today. The former head of the Illinois Chapter of the Black Panther Party for Self-Defense is remembered today primarily for his skills as an organizer, who coined the phrase “Rainbow Coalition” to describe his deft assemblage of a broad array of politicized actors, including Confederate flag-wearing, working-class whites, Latino gangbangers, Black professionals, wealthy white college students and autoworkers.

Chicago was the most active and exemplary chapter in the country. The young man was magnetic. He was born for leadership.

But increasingly, Hampton is remembered for his breathtaking oratory—by turns earthy and eloquent, profane and transcendent, equal parts Mao and Martin Luther King Jr.—punctuated by a legato, lyrical delivery.

“He was such a public speaker,” said Illinois Congressman Bobby Rush, who recruited Hampton to join the Panthers.

There was a kind of quiet competition between him and Jesse Jackson back in 1969.

But to hear Hampton’s speeches today, is to hear the unmistakable cadence, intonation, and raw, gritty, Blues of some of our most revered rappers: Nas, Jay-Z, and the late Tupac, whose mother, Afeni, was a contemporary of Hampton’s, and a member of the New York Chapter of the Black Panther Party.

Historians typically cite 1974 as the birth year of hip-hop, and the Bronx, not Chicago, as its birthplace. And the entertainers most often credited as the genre’s two biggest influences are Gil-Scott Heron, and the Last Poets.

But Heron didn’t release his first album until 1969, the year Hampton died, and the Last Poets didn’t coalesce until 1970, which raises an interesting question: Is Hampton really the Godfather of Rap?

3. ‘You Can’t Kill the Revolution’

4. ‘Power Anywhere Where There’s People,’ as recited by Michael B. Jordan