Channel 4’s two-part documentary, The School That Tried to End Racism, centres on events during the filming of a group of Year 7 (eleven- and twelve-year-old) pupils over three weeks in April last year.

The pupils were subjected to a cruel experiment, but this was positively described by the programme’s narrator as a “ground-breaking initiative” concerning racial bias. 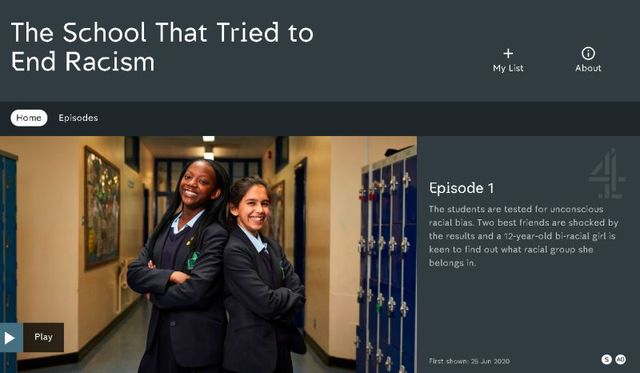 Channel 4’s The School That Tried to End Racism

Mariama Richards, an American “diversity and inclusion practitioner,” led the experiment. As Director of Progressive and Multicultural Education at the Ethical Culture Fieldston private school in New York, she introduced racially segregated affinity groups in 2015, which became mandatory in schools in New York and Washington DC.

What initially struck this reviewer was that here was a group of cheerful, intelligent, and articulate youngsters, proud to consider themselves anti-racist and “colour-blind” in their choice of friends. They profess a healthy egalitarian ethic, commenting, “I don’t think race matters”; “It doesn’t matter what skin-colour you have”; “Since the start of my life, I’ve been told that your race doesn’t really matter. It’s who you are as a person.”

Thanks to the measures inflicted on them, the children are in for a nasty shock.

The voiceover makes the statement that today “most of us know racism is wrong,” but then follows with the question, “Is it possible we could all be racist without knowing it?”

The documentary ignores the racist policy of successive Labour and Conservative governments, intended to create a “hostile environment” for immigrants and their families, and fails to offer any explanation of how racism developed historically in different societies. Racism is instead confined to the realm of psychology and not probed to its source—the capitalist system which seeks means to divide the working class to maintain its rule. Blame is shifted onto the individual, in this instance a group of unwitting pupils in their first year at high school.

As part of the experiment, the children sit an Implicit Association Test (IAT), which supposedly measures unconscious bias, in this case racial bias. The test compares whether someone is quicker to link white faces with words suggesting the concept “bad” and black faces with words associated with “good” and vice versa. IATs were created by researchers from Harvard University involved with the Implicit Project, a not-for profit organization founded in 1998 and endorsed by Hillary Clinton.

Laughter during the test turns to tears when the children are told the test results indicate a “racial bias” towards white people among 18 of the group of 24. The white children are particularly horrified, as no one wishes to be perceived racist by their friends.

“The IAT measures people’s associations between concepts. So, the classic race IAT compares whether you’re quicker to link European-Americans with words associated with the concept ‘bad’ and African-Americans with words related to ‘good’ or vice versa. Your score is on a scale of -2.0 to 2.0, with anything above 0.65 or below negative 0.65 indicating a ‘strong’ link [indicating racial bias].”

In response, the APA cites Texas A&M University psychologist Hart Blanton, Ph.D., who notes, “There’s not a single study showing that above and below that cut-off people differ in any way based on that score.”

Neither do individuals produce consistent scores.

Worse is to follow for the Glenthorne school children. They are segregated into “affinity groups,” depending on whether they “identify” as black or white. The very label is divisive, suggesting a greater affinity between people of the same skin colour. Henry, in the white group and who describes himself as “ginger European,” is reduced to tears. He cries again when talking to his parents about his traumatic day. “What we were talking about is what it means to be white. And it felt really weird. I didn’t feel comfortable talking.

“If I had the choice, I would be with my friends, not just by race, because that feels awful,” he says.

In their group the white children look dejected and mortified, thinking themselves as unconscious racists burdened with “white privilege.”

Dr Rollock explains to the camera that “white privilege is not about wealth but being free from the consequences of racism,” dismissing the growth of inequality in society between the wealthy elite and the increasingly impoverished working class of all ethnicities and colour.

The BAME children share experiences of racism with the whole group. Bright recounts how his family were humiliated in a restaurant and asked to pay up front. Another child describes how a policeman picked on him in a shop, based on the stereotypical assumption that black kids steal. The white children are shocked.

In another session, the children are lined up ready for a race. They are asked to take steps backwards, for example, if they had ever been warned about racism, or anyone in their family had been stopped and searched. If their family was born in the UK, this merits a step forward. The children are confronted with “white privilege.” Beth admits to feeling “guilty” about having an unfair start in life.

Behind the experiment are reactionary, right-wing politics based on the conception that identity, especially race, is the main driver in society. The fundamental determinant of achievement, however, is class. Wealth inequality affects every aspect of life, including educational outcomes. The working class of all ethnicities lead shorter lives than the rich, and the rich enjoy more years in good health than the poor.

The proponents of identity politics are not speaking for BAME working class people, who are among the most exploited, but for the aspiring upper middle class who feel deprived of the opportunity to share the immense wealth at the top of society. Speaking for the layer she represents, Dr Rollock says, “These are the children who are going to be running the country and employing people.”

At the conclusion of the experiment, the children repeat the initial test. Having been set up to fail the first time around, having been trained to the test, they come out showing no “unconscious racial bias” and are greatly relieved.

Channel 4’s The School that Tried to End Racism is a shameful propaganda piece that promotes identity politics, to the detriment of children who were clearly traumatised, upset and confused by the experiment’s divisive agenda. In one telling incident the group visit London’s National Portrait Gallery and are asked to consider why so few portraits of black people are hanging there. One boy finds the answer not in fact-based history but what the experiment has taught him—in “white privilege”. He dismisses the world-famous collection, shouting, “It’s all dead in there!”

The corporate media lauded the series, but its main backer was the Guardian—which represents the interests of a selfish upper middle-class layer who specialise in promoting all manner of identity policies. It applauded a “gripping documentary” based on the “first UK trial of a US programme aimed at educating pupils in unconscious racial bias,” as “a powerful lesson in white privilege.” But many voices of disquiet were expressed on social media. Among the tweets were, “This is very concerning. Classrooms aren’t laboratories and children aren’t test subjects.”

Another tweeted, “I thought the first show was pretty horrifying. It ended with white kids feeling guilty for being white and non-white kids deflated, at best convinced the system made it impossible for them to do well. It felt like child abuse.”

A further tweet stated, “I’m horrified at what they did. This is just plain wrong. This is straight up Critical Race Theory in the classroom.”

Critical theory has its roots in the Frankfurt School, the precursor of the post-modernism which emerged in the 1960’s and dominates many university courses. Post-modernism rejects a scientific understanding of the world as law-governed, in favour of subjective narratives—all supposedly equally valid. It regards class as only one of many identities alongside race, ethnicity and gender.

Approximately one year after the film was made, the reactionary logic of this political, rather than scientific outlook is clear for all to see. Protests erupted on every continent over the heinous murder of George Floyd by US police, which mobilised young people across all artificial racial divisions. In these protests, the politics of race and identity lauded by the Guardian and Channel 4, has promoted a communalist narrative that undermines the necessarily united struggle against capitalism and its state apparatus.