The imprisonment of Julian Assange has been a catalogue of gross injustice heaped upon gross injustice, while a complicit media and indoctrinated population looks the other way. In a truly extraordinary twist, Assange is now being extradited on the basis of an indictment served in the UK, which is substantially different to the actual indictment he now faces in Virginia if extradited.

The Assange hearing was adjourned after its first full week, and its resumption has since been delayed by coronavirus. In that first full week, both the prosecution and the defence outlined their legal arguments over the indictment. As I reported in detail to an audience of millions, Assange’s legal team fairly well demolished the key arguments of the prosecution during that hearing.

This extract from my report of the Defence case is of particular relevance to what has since happened:

For the defence, Mark Summers QC stated that the USA charges were entirely dependent on three factual accusations of Assange behviour:

1) Assange helped Manning to decode a hash key to access classified material.
Summers stated this was a provably false allegation from the evidence of the Manning court-martial.

3) Assange knowingly put lives at risk
Summers stated this was provably wrong both from publicly available information and from specific involvement of the US government.

In summary, Summers stated the US government knew that the allegations being made were false as to fact, and they were demonstrably made in bad faith. This was therefore an abuse of process which should lead to dismissal of the extradition request. He described the above three counts as “rubbish, rubbish and rubbish”.

Summers then walked through the facts of the case. He said the charges from the USA divide the materials leaked by Manning to Wikileaks into three categories:

Summers then methodically went through a), b), c) and d) relating each in turn to alleged behaviours 1), 2) and 3), making twelve counts of explanation and exposition in all. This comprehensive account took some four hours and I shall not attempt to capture it here. I will rather give highlights, but will relate occasionally to the alleged behaviour number and/or the alleged materials letter. I hope you follow that – it took me some time to do so!

On 1) Summers at great length demonstrated conclusively that Manning had access to each material a) b) c) d) provided to Wikileaks without needing any code from Assange, and had that access before ever contacting Assange. Nor had Manning needed a code to conceal her identity as the prosecution alleged – the database for intelligence analysts Manning could access – as could thousands of others – did not require a username or password to access it from a work military computer. Summers quoted testimony of several officers from Manning’s court-martial to confirm this. Nor would breaking the systems admin code on the system give Manning access to any additional classified databases. Summers quoted evidence from the Manning court-martial, where this had been accepted, that the reason Manning wanted to get in to systems admin was to allow soldiers to put their video-games and movies on their government laptops, which in fact happened frequently.

Magistrate Baraitser twice made major interruptions. She observed that if Chelsea Manning did not know she could not be traced as the user who downloaded the databases, she might have sought Assange’s assistance to crack a code to conceal her identity from ignorance she did not need to do that, and to assist would still be an offence by Assange.

Summers pointed out that Manning knew that she did not need a username and password, because she actually accessed all the materials without one. Baraitser replied that this did not constitute proof she knew she could not be traced. Summers said in logic it made no sense to argue that she was seeking a code to conceal her user ID and password, where there was no user ID and password. Baraitser replied again he could not prove that. At this point Summers became somewhat testy and short with Baraitser, and took her through the court martial evidence again. Of which more…

Baraitser also made the point that even if Assange were helping Manning to crack an admin code, even if it did not enable Manning to access any more databases, that still was unauthorised use and would constitute the crime of aiding and abetting computer misuse, even if for an innocent purpose.

Now while there is no evidence that judge Baraitser is giving any serious consideration to the defence case, what this has done is show the prosecutors the holes in their argument which would cause them serious problems should they get Julian to trial in the United States. In particular, they are wary of the strong freedom of speech protections in the US constitution and so are desperate to portray Julian as a hacker, and not a journalist. But, as you can see above, their case for this is not looking strong.

So the prosecution needed a different case. They have therefore entirely changed the indictment against Julian in Virginia, and brought in a superseding indictment. 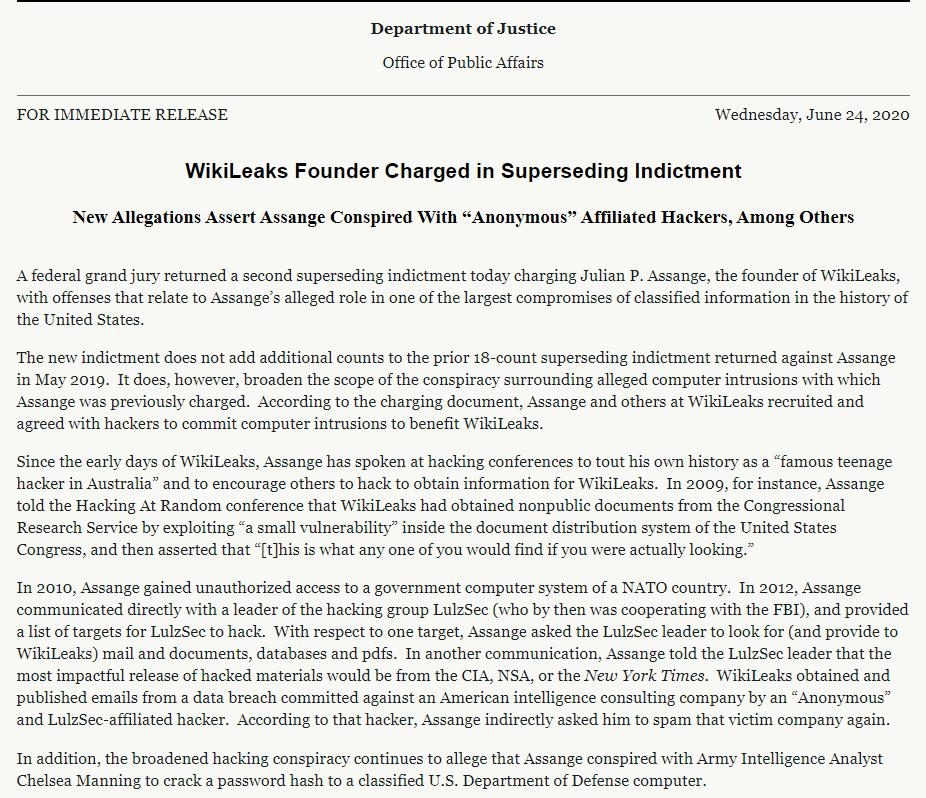 As you can see, this is about switching to charges firmly grounded in “hacking”, rather than in publishing leaks about appalling American war crimes. The new indictment is based on the evidence of a “supergrass”, Sigurdur Thordarson, who was acting a a paid informant to the FBI during his contact with Wikileaks.

Thordarson is fond of money and is a serial criminal. He was convicted on 22 December 2014 by Reykjanes District Court in Iceland of stealing over US $40,000 and over 13,000 euro from Wikileaks “Sunshine Press” accounts by forging documents in the name of Julian Assange, and given a two year jail sentence. Thordarson is also a convicted sex offender, and was convicted after being turned in to the police by Julian Assange, who found the evidence – including of offences involving a minor – on Thordarson’s computer.
[Updated 13.45 to add detail of Thordarson’s convictions].

There appears scope to doubt the motives and credentials of the FBI’s supergrass.

The FBI have had Thordarson’s “Evidence” against Assange since long before the closing date for submissions in the extradition hearing, which was June 19th 2019. That they now feel the need to deploy this rather desperate stuff is a good sign of how they feel the extradition hearing has gone so far, as an indicator of the prospects of a successful prosecution in the USA.

This leaves the UK extradition in a state of absolute farce. I was involved in discussion with Wikileaks about what would happen when the supervising indictment was introduced at the procedural hearing last month. It ought not to have been accepted – it is over a year since the closing date, and a week of opening arguments on the old indictment have already been heard. The new indictment is plainly designed to redress flaws in the old one exposed at the hearing.

The superseding indictment also is designed to counter defence witness affidavits which have been disclosed to the prosecution, including expert witness testimony which refutes the indictment on Assange’s alleged hacking assistance to Manning – until now the sole ground of the “hacking” accusation. This switch, we averred, was an outrageous proposition. Was the whole hearing to start again on the basis of the new indictment?

None of which will come as any shock to those of us who have been paying attention. We have to continue to build public consciousness of the fact that the annihilation of a journalist for exposing war crimes, based on a catalogue of state lies and dodgy procedure, is not an act that the state can undertake without damage to the very soul of the nation.