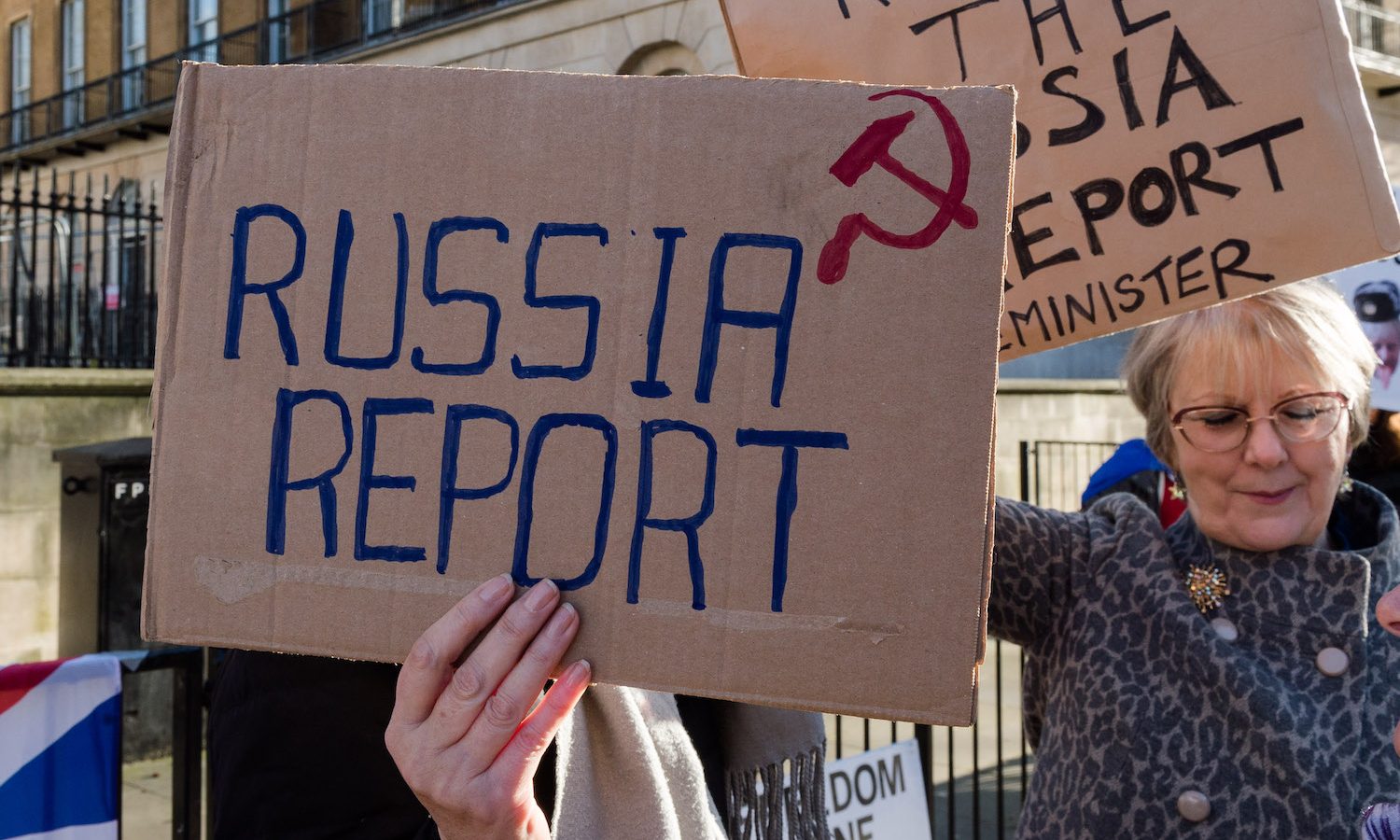 Nobody in the mainstream will tell you this. The media are going to tell you it’s a “shocking condemnation Britain’s vulnerability to hostile state actors” or something similar, the Remainers will tell you it’s cast iron evidence the Brexit vote was rigged, and Luke Harding will tell you it means “they” are all around us and you should buy a copy of his book.

The truth is it’s just the latest of the Deep State’s plays to secure as much power as possible as quickly as possible. If anything, it already feels old-fashioned, being authored in a pre-Covid world, but that doesn’t mean it can’t be put to use in service of the world’s “new normal”.

In terms of actual content, there’s nothing new here. It’s just a collection of familiar proven lies and unproven accusations in the service of four primary agendas:

You can plow through the whole thing here if you really feel the need.

For those outside the UK, who may not be aware of this story, sometime last year it was “leaked” that the UK parliament’s Intelligence and Security Committee had prepared a report on “Russian interference” in UK politics. In a brilliant piece of PR manoeuvring, Boris Johnson refused to make the report public.

This decision manipulated those who consider themselves “the left” in British politics to clamour for the release of the “Russia Report”, believing there would be something in it that Boris didn’t want us to see. This was an act of pure naivety by Corbynista influencers, and deliberate public manipulation by the “leftist” media.

Yesterday Boris Johnson’s government finally “caved” to this pressure, and released a “confidential report” which tells us nothing we haven’t been told a million times before. This apparently secret testimony has been blasted across headlines in every broadsheet and tabloid for years.

Russia is accused of poisoning the Skripals, leaking the DNC emails, using “bots and trolls” to influence public opinion…and so and so on.

The witnesses called are all either actual spies (Christopher Steele), or “journalists” heavily involved with the Integrity Initiative (Edward Lucas). No evidence is supplied, save the tired old links to “academic studies” conducted by bought-and-paid-for NATO shills like Ben Nimmo and Bellingcat (whose direct funding from the likes of the Atlantic Council and National Endowment for Democracy represents a massive conflict of interest that is never once mentioned in the report).

In that way, the report is massively dated. Its lies, worn smooth through repetition, are dry and stale.

But that’s not the point of this report. That’s the first part of the Hegelian Dialectic. The “problem”, long since mythologised, created by force of repetition without ever being evidenced. This report is far more concerned with generating a “reaction”, and the procuring consent for a pre-planned “solution” (the report doesn’t shy away from this obvious structure – using the terms “threat” and “reaction” instead).

In short, buried in the 55 pages of waffle, repetition and bureaucratic double-talk, are key suggestions to take a more warlike stance against Russia and parlay this into a simultaneous crackdown on dissent at home, all while securing shiny new powers for MI5.

Firstly, the UK plans to strike a new attitude on “attribution” of alleged cyber attacks, claiming, apparently with a straight face:

The UK has historically been reticent in attributing cyber attacks – as recently as 2010, this Committee was asked to redact mention of Russia as a perpetrator of cyber attacks, on diplomatic grounds.

But the UK’s “reticence” to blame Russia for cyber attacks is over, they now intend to “name and shame” foreign actors who carry out cyber attacks:

there has to now be a cost attached to such activity. When attacks can be traced back – and we accept that this is in itself resource-intensive – the Government must always consider ‘naming and shaming’.

[NOTE: This section on “attribution” would an absolutely ideal time to mention that other state player – namely the US military – have the technology to carry out cyber attacks and make it appear to have come from somewhere else. We know they know, because of the Wikileaks Vault 7 leaks, but they don’t mention it.]

Oh, and they’re going “leverage” their diplomatic relations to force those countries who would rather not start a new cold war based on the testimony of lunatics, fraudsters and underwear salesmen, to publicly blame Russia for…pretty much everything:

This is dishonest, and potentially dangerous, but this kind of geo-political positioning is very much the long game. It’s the short term stuff, the local stuff, we should really worry about.

Like handing over powers to “monitor” and “protect” the democratic processes of the country to MI5 [our emphasis]:

Overall, the issue of defending the UK’s democratic processes and discourse has appeared to be something of a ‘hot potato’, with no one organisation recognising itself as having an overall lead. Whilst we understand the nervousness around any suggestion that the intelligence and security Agencies might be involved in democratic processes […] that cannot apply when it comes to the protection of those processes […] Protecting our democratic discourse and processes from hostile foreign interference is a central responsibility of Government, and should be a ministerial priority. In our opinion, the operational role must sit primarily with MI5

Social Media is an important theme in the report, actually, being mentioned fifteen times in 47 pages.

Firstly, we’re told that social media companies must bear the brunt of the blame for “hostile state activity” being at all effective:

Before they add the government must seek a “protocol” by which social media companies remove any material the UK government deems “hostile state use” of their platform:

The Government must now seek to establish a protocol with the social media companies to ensure that they take covert hostile state use of their platforms seriously, and have clear timescales within which they commit to removing such material

Any companies who refuse to do this will be “named and shamed”.

You might think “well, this protocol could easily be used against people with no state affiliation whatsoever”, and you’d be right. It could. The government admits as much, but doesn’t seem to have a problem with it:

Such a protocol could, usefully, be expanded to encompass the other areas in which action is required from the social media companies, since this issue is not unique to Hostile State Activity

This would be a good time to note that the Atlantic Council employees this report cites have, in the past, labelled people “bots” who are definitely, provably not bots. This includes noted independent journalists and a world-renowned concert pianist.

The proposed “protocol” opens up an avenue for the state to silence dissident individuals by similarly “mistaking” them for state-backed agents.

Another thing the report is keen on is boosting the UK’s “Offensive Cyber” capabilities:

What their offensive cyber capabilities ARE, and how they use them, is never described. Are they used solely against other states, or against domestic politic parties, organizations and individuals too? They don’t say.

While the UN has agreed that international law, and in particular the UN Charter, applies in cyberspace, there is still a need for a greater global understanding of how this should work in practice […] Achieving a consensus on this common approach will be a challenging process, but as a leading proponent of the Rules Based International Order it is essential that the UK helps to promote and shape Rules of Engagement, working with our allies.

The fact that people out there can even begin to cite this report in earnest when it describes the UK as a “key defender of a Rules Based International Order” just boggles my mind.

The real scary stuff comes later though, in the “legislation” section.

The UK is already one of the most surveilled countries in the world, and the report happily mentions that last February, the UK police/intelligence agencies got [our emphasis]:

new powers to stop, question, search or detain any person entering the UK gained Royal Assent in February 2019; it is not necessary for there to be suspicion of engagement in hostile activity in order to use these powers.

Following on from this, the report recommends a new Espionage Act and a Foreign Agent Registration Act, to “crackdown” on espionage.

Hearings resulting from these acts could be “closed material proceedings” to protect national security.

For those who don’t know, in UK law a “closed material proceeding” is a hearing where a prosecutor presents some evidence directly to a judge which is kept secret from both the public and the defense counsel.

Until this new legislation is passed, the report warns, “the Intelligence Community’s hands are tied.”

To sum up, the long-awaited Russia report is – surprise surprise – not a trove of secrets and corruption which could bring down the Johnson government. It was never going to be that, despite what all the fake-left “journalists” were saying, and what all the Labour supporters who should know better were tweeting.

It was actually sickening to watch so many people, especially in Corbyn’s camp, cry-out for this report and not realise they were getting played. It’s the oldest trick in the book. Cheap reverse psychology that doesn’t work on children past the age of about five, but apparently does work on the majority of the members of the Labour party.

Thanks to their gullibility, no one is questioning the honesty, providence or intentions of a report which finds, in short:

People who are supposed to guard against tyranny and hold power to account have abandoned their posts to take part in anti-Russia hysteria which endangers what remains of our civil liberties. 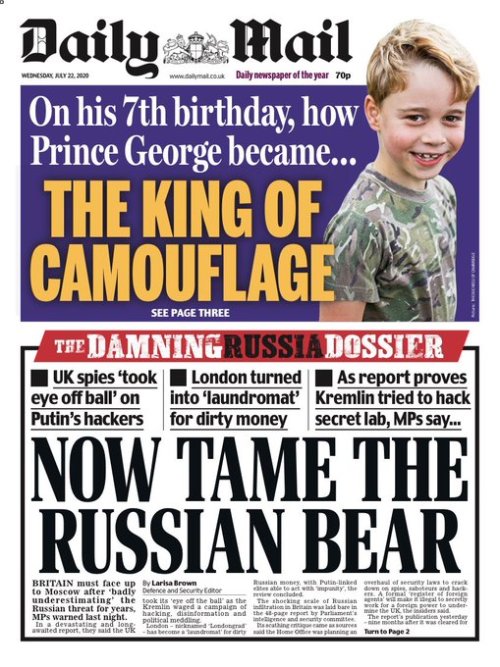 It’s the same old lies, on the same old topics, told by the same old people, for the same old reasons. The only difference is, this time, they managed to trick some of the gullible “woke” left into begging for it.

One thought on “The “Russia Report”: Deep State reinforcing delusion to spread fear and seize power”