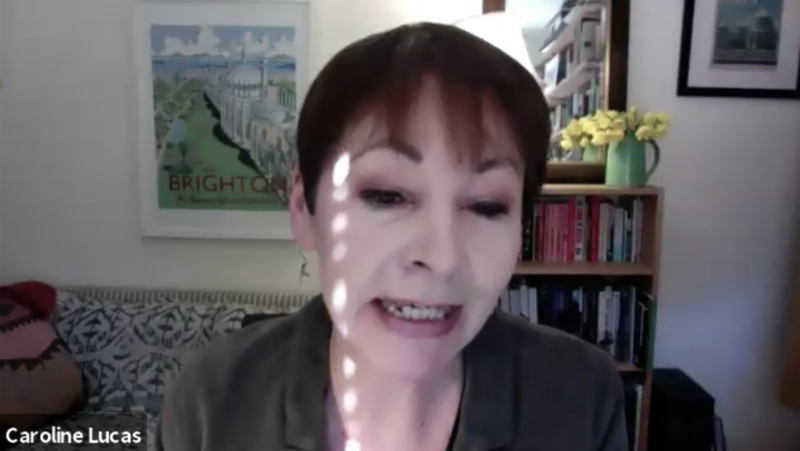 Video of this month’s Green conference shows MP Caroline Lucas calling for the party’s standing orders to be suspended, rather than voting on a motion against the flawed IHRA definition of anti-Semitism.

UK Member of Parliament Caroline Lucas intervened at a biannual conference to stop her Green Party from passing a motion against a misleading definition of anti-Semitism, activists say.

Green activists have accused her of “filibustering” and “cheating,” which she denies.

Although the party leadership is in favor, the Green Party of England and Wales has so far not endorsed the International Holocaust Remembrance Alliance’s “working definition” of anti-Semitism due to grassroots opposition.

The motion, at the party conference online on 7 March, would have committed the Greens to actively campaigning against the bogus definition, which has been pushed by Israel and its lobby for years.

Unlike most parties in the UK, which hold their policymaking conferences once a year, the Greens hold theirs every six months.

Motion D07, “Anti-Semitism, Palestine and Free Speech,” was co-sponsored by the party’s home affairs spokesperson Shahrar Ali. Ali says it received support in an indicative straw poll at a “packed” workshop earlier in the conference.

Video shows that 60 percent of 115 participants voted in favor of the motion.

But the motion itself was not voted on in the 7 March plenary, after Lucas successfully delayed the debate by 12 minutes, video of the conference shows.

In a response to The Electronic Intifada, Lucas denied “filibustering or acting in an undemocratic way.”

She said it was “disappointing that some are choosing to play politics with such an important issue” and defended her actions, saying “I understand fears that the IHRA definition might be misused to restrict free speech but the definition is very clear.”

“Oppose adoption of the IHRA definition”

The motion had asked the conference to “reaffirm its support for free speech on Israel and Palestine and for the Green Party to campaign against adoption” of the IHRA definition and in support of BDS, the Palestinian-led boycott, divestment and sanctions campaign.

If successful, the motion would have instructed the party’s campaigns team and elected representatives “to oppose adoption of the IHRA definition with examples, and campaign to protect free speech across our public institutions and universities.”

As a result of Lucas’s intervention, activists say, the plenary session was delayed resulting in it running out of time and Motion D07 being bumped off the schedule.

Lucas, who is the only Green MP in the British parliament and formerly the party leader, had co-sponsored a second, rival, motion in favor of the IHRA definition, along with the party’s co-leaders, Sian Berry and Jonathan Bartley.

Berry has previously met with pro-Israel lobbyists to declare her support for the definition.

But Lucas’ pro-IHRA motion received little support from conference participants. It was initially ruled out of order by party officials. It was later put back on the agenda, but in a slot much further down than D07, which meant it was unlikely to be debated and voted on.

Footage of the online conference viewed by The Electronic Intifada, shows that Lucas asked the conference to not only move her motion back up the agenda, but to debate it before the anti-IHRA motion.

Party officials responded that the conference had already voted to rule her motion out of order. They also said that Lucas’ intervention was against the party’s standing orders.

Her request was rebuffed by officials as being contrary to the rules.

But her intervention lasted 12 minutes. Activists said this was enough to push the anti-IHRA motion off the agenda till later in the conference.

The footage shows that the remaining plenary session turned out to be enough time for debate and voting on D06 only – a motion unrelated to Palestine or anti-Semitism.

Activists say they would have had time to get to D07 – the motion reaffirming free speech and support for Palestinian rights – if not for Lucas’ intervention.

Lucas’ motion claimed the IHRA definition was “a helpful set of guidelines” which is “considered by the mainstream Jewish community to be the gold standard definition,” which, if passed, would be “for the party’s internal use.”

The motion didn’t define what is meant by “mainstream Jewish community,” but broadly supported left-wing Jewish organizations like Jewish Voice for Peace and Jewish Voice for Labour both oppose the IHRA definition.

Every Green member should be equal

Activists were disappointed that Lucas used her privileged status as the party’s only MP to successfully scupper the anti-IHRA motion.

“This was our chance, and she knew that,” a Green Party source who had been in favor of the motion told The Electronic intifada. “Her actions were incredibly undemocratic.”

Posting on Twitter, the anti-IHRA motion’s co-sponsor Sharar Ali called her intervention “breathtaking” and wrote he was deeply concerned about party democracy.

He posted that “in our party every member is equal not some members are allowed to overturn democracy because they haven’t got their way.”

The IHRA definition has been widely criticized by Palestinian, Black, Asian, Jewish and free speech groups.

As the anti-IHRA motion noted, there has been “relentless pressure upon public and educational institutions to adopt” the definition.

It said that the examples in its text “systematically conflate opposition to Israeli policies with anti-Semitism, threatening to undermine many years of practical solidarity with the Palestinian people.”

The motion added that “unjustified allegations of anti-Semitism also set back the fight against anti-Semitism itself” and pose “a serious threat to academic freedom, wider freedom of expression and the unjustified attacks upon Green candidates and spokespersons.”

Ali himself has in the past been attacked with false anti-Semitism smears.

In her statement, Caroline Lucas said: “I brought a procedural motion proposing that the two motions about the IHRA definition on anti-Semitism be debated at the same time, because I judged them to be mutually exclusive, one in favor, the other against.”

“I wanted conference to have the opportunity to express their view on whether to take the motions together,” Lucas added.

“I have long been outspoken against the illegal occupation of Palestine and what is increasingly being acknowledged as the apartheid actions of the Israeli authorities,” Lucas asserted.

The Green PM said she would “continue to actively resist any attempts to shut down free speech.”

However, she added that the deeply flawed IHRA definition which has routinely been used as a pretext to muzzle criticism of Israel “has the support of the Jewish Greens liberation group and I maintain that it is an important tool.”