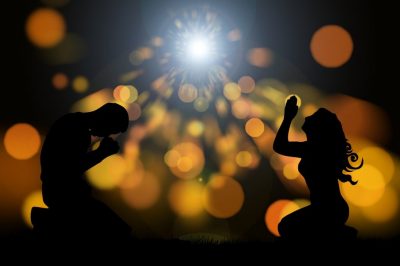 The issue, for me, is not to demonize vaccination the way fundamentalists demonize any alternative to their God, usually by attacking people who dare to talk about it.

The issue, for me, is to tell people the truth:

There are safer, more effective and less dangerous alternatives to finding the way out of this crisis.

We are in a phase of religious fundamentalist totalitarianism.

In this phase, which is reaching its hysterical climax, the Vaccine is the new God. The parallel with religions in their extremes is striking.

I am not talking about religions in the original sense, one of whose accepted etymologies is religare, to connect [1]. All religions have been used by a part of their hierarchy to control, dominate, separate, exterminate, diverting the religious message from its original ambition, which is to gather, explain, reassure, include, protect and give meaning to our lives.

Behind this specter of vaccine fundamentalism are cynical people, who go so far as to pretend that they are concerned about your well-being.

There have always been cynics, including those behind religions that preached forgiveness, inclusion, justice, goodness in words but in fact killed, separated, judged, imprisoned and exterminated by means of zealous sadistic, psychopathic, fanatical executors.

If people want trustworthy rulers, honest politicians, they should always judge rulers, financial elites, politicians by their actions rather than by their words.

An example of this in Belgium was the appointment in 2020 of a person who had already defrauded, lied and betrayed [2] years earlier as Minister of Health.

To the credit of the people, it must be said that in Belgium, elections or not, citizens have no control over ministerial appointments.

Similarly, in France, the Minister of Justice is … indicted while retaining his position [3]. He obviously retains the support of his government.

Let us continue the parallel between the Vaccine and God.

In this story of the Almighty Vaccine, there are also many sincere believers. Some are even the fanatics, the token extremists.

No matter what you say, serious studies or solid reasoning, it won’t change anything.

A French minister said it in these fundamentalist terms in 2015, “Vaccination is not debatable” [4].

I told you, many believers are sincere. Isn’t Hell paved with good intentions?

For the Vaccine God, they do not ask for proof.

“It has been said that Vaccination saved humanity, that it eradicated polio, that’s enough, no need to look for or read the studies, the original reports that prove it. In fact, they do not exist or have been truncated (see the work of Dr. Edward H. Kass of Harvard: Enquête Choc – Les vaccines ont-ils vraiment sauvé l’humanité? – Health and Wellness – Sott.net).

On the other hand, for drugs that have proven themselves, 70 years of use for hydroxychloroquine, more than forty years for ivermectin considered essential by the World Health Organization, more than forty years for azithromycin, molecules defended in the treatment of COVID-19 by reliable renowned scientists, and used in the field by many doctors with success, maximum mistrust.

Nothing can be done about it.

The believer does not tolerate any deviation from his faith.

It is even on this characteristic that we identify him, that we distinguish a believer from a true scientist who doubts, who relies on a provisional truth to advance, from question to question, never satisfied with ready-made answers.

For the RNA/DNA “vaccine”, all indulgences are allowed, even though the technology has been studied for several years, these products are unknown in large-scale human therapeutics, the pharmaceutical companies’ studies are in phase III [5], their marketing authorization is conditional, and the side effects, and even deaths, are accumulating [6]. Even this is contested by believers and all the fact checkers are on the case. Fact checkers paid by whom?

For a drug as essential as ivermectin, with today’s accumulating evidence of its benefit in treating COVID-19 [7-8-9-10], at all its stages, the number of randomized double-blind peer-reviewed studies will never be high enough for the Vaccine believer.

No paper, no scientist, even one with five Nobel Prizes, will ever convince the Vaccine believer.

On the other hand, for the God of Vaccines, any contradictory information will be fake news, disinformation, automatically demolished by the fact checkers, even before being analyzed, which it will never be anyways by the believers of the Vaccine.

The Vaccination religion feeds on the scientific aura, drapes itself in objectivity, rationality but in the case of Vaccination, it is only that, rags, appearance, fog. In reality, the belief in vaccination is nothing but subjectivity, emotionality and faith.

The “science” of Vaccination, as it is spread among today’s fundamentalists, is a parasite of true Science, a tumor invading true medicine. 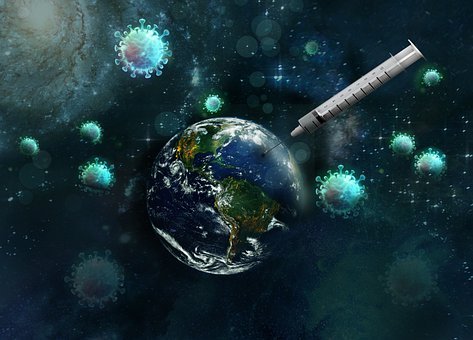 The fundamentalists of Vaccination as an exclusive religion have a lot of fun to make amalgams, to put all their opponents in the same basket, the easiest basket to criticize.

For my part, I consider vaccination, even this RNA/DNA genetic manipulation, as an option, why not, provided that all the authorization phases are respected, that warning signals are taken into account and that time is taken to ensure safety.

The issue, for me, is not to demonize vaccination as the fundamentalists of it demonize any alternative to their God, usually by attacking people who dare to speak about it.

The issue, for me, is to tell people the truth:

There are safer, more effective and less dangerous alternatives to finding the way out of this crisis.

These alternatives will not make money for the big laboratories and Big Pharma whose stock market shares have skyrocketed thanks to the Vaccine God, they will not allow the rulers tempted by an absolute takeover of our lives to achieve their ends.

But these safer, more effective, less dangerous alternatives will work, they will remove the danger, including the variants, without exposing a part of humanity to unacceptable side effects [11], to unacceptable deaths [12], to an irreversible locking up of our liberties.

These notions are essential to understand how to fight this fanaticism, how to get out of this health nightmare and this totalitarianism which has the Vaccine as its God and which uses it to achieve its ends.

It is perfectly acceptable for Vaccine believers to sacrifice flocks for the common good, including healthy young people who give their lives so that the new God can save humanity.

What would shock any sane person is seen as sanctification by Vaccine believers.

We cannot address in the same way the cynics, those who only use this situation for their own profit (political, financial, narcissistic), and the true believers, those who have Faith, those who sincerely believe in their new God called Vaccine, even if in this case it is not a real one.

The former, cowards as usual, hide behind the latter.

The former deserve neither dialogue nor forgiveness. We must deal with them as a healthy human body deals with a parasite, a cancer cell or a pathogen.

The latter must be dealt with in the light of their sincere faith. Vaccination is their right, but perhaps if they learned that there are more effective and less dangerous alternatives, they would come to their senses.

As for the most fanatical elements who are not cynical opportunists disguised as believers, for those who want everyone to be vaccinated, there is no way out, no way out other than to protect ourselves from them, for the common good, by keeping them away and helping them psychologically.

Humanity is really in danger today, not because of what most people believe.

Not because of a virus.

Because of the cynical psychopathy of a few, the blind Faith of some, the deception-based belief of many and the bystander passivity of the majority.

Whatever category you fall into, you will be responsible for the fate of humanity.

You can still act, choose.

He is a Research Associate of the Centre for Research on Globalization (CRG).

4 thoughts on “The Specter of Vaccine Fundamentalism: Bowing Down and Serving the “God of Vaccines””