Forty-eight hours later both stories are still uncorrected despite the fact that many have have pointed out the ‘error’ in them. 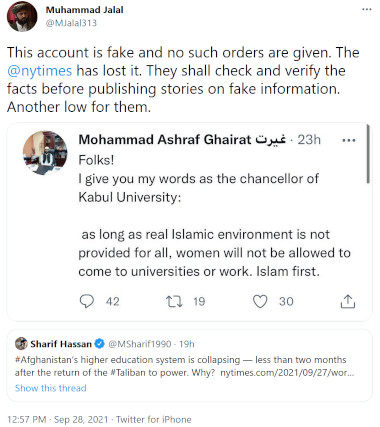 The Washington Post though, which had also run a story quoting the tweet, has applied a correction. On top of its piece it now says:

Correction: An earlier version of this article attributed comments to Mohammad Ashraf Ghairat, the new chancellor of Kabul University, that appeared on a Twitter account in his name. Subsequent messages on the account asserted the actual user was a Kabul University student who tweeted “fake” words to raise awareness of the Taliban’s policy. The article has been corrected.

Further down it explains:

Adding to the uncertainty were messages that appeared this week on a Twitter account in the name of Mohammad Ashraf Ghairat, appointed last week as the university’s chancellor. One warned that women would not be able to allowed to attend universities or work.

Some suggested the messages were the work of an impostor. On Wednesday, new tweets appeared on the account saying the user was a 20-year-old student of the law and political science faculty who had been “pretending to be the new chancellor” with “fake” words that he hoped would “awaken Afghans, and the world to put pressure on Taliban to open the schools and universities.”

“Some suggested” does an awful lot of work here when one considers that ‘some’ included various Afghan media and the University of Kabul and that its ‘suggestion’ was a statement which explicitly denied that its chancellor has any social media accounts. ‘Some suggested’ also proves that the original article was never fact checked.

What this suggests to me is that the ‘journalist’ and ‘editors’ at the Washington Post were just as lazy as those at the New York Times, CNN and elsewhere. That they did not even attempted to verify the person behind that Twitter account or the content of the tweet. It was too conforming with their own myths and opinions about the Taliban to be held in doubt.

Moreover they still have not explained who the person behind the imposter account, which is now back online, really is and what its real motives are. Nor have they explained the real official Taliban policy with regards to the university.

I for one, judging from the language in the imposter latest Twitter thread, have strong doubts that the person behind the fake Mohammad Ashraf Ghairat account is a real Afghan student or even in Afghanistan. I find it way more likely that the imposter is part of an anti-Taliban astroturf campaign.

Now let us recall that the media who run this fake story and their ‘journalists’ are the very same who have for years accused Russia and other countries of providing ‘fake news’ just because some stories on Russia Today did not fit with their own warped worldview. It is obvious now that it was just another incident of them projecting their own attitude towards truth onto others.