Even with very high vaccination rates, we will not achieve herd immunity

By Gérard Delépine
For more than 18 months, our governments and the  media have been telling us:

But no real-world study has provided the slightest evidence to support this pro-vaccine injection marketing propaganda.

And the analysis of official WHO data (available at WHO covid dashboard) is very disturbing.

None of the champions of vaccination have succeeded in eliminating the virus, nor in avoiding strong resurgence of the epidemic, and very few have totally liberated their vaccinated people from the supposedly health liberating measures imposed without scientific proof of their effectiveness.

Britain is the champion of the Astra Zeneca injection

But its high level of “vaccination” has not protected it from a strong resumption of the epidemic which has persisted for four months, with an average of 40,000 cases daily. 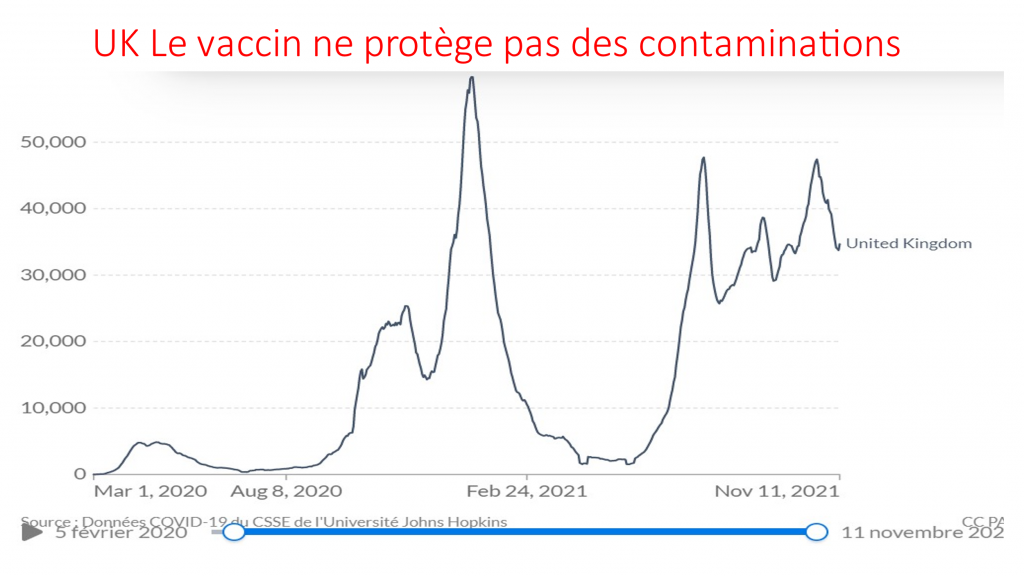 On August 10, 21, testifying before British MPs, Professor Sir Andrew Pollard head of the Oxford Vaccine Group said “the fact that vaccines did not stop the spread of Covid meant that reaching the threshold of global immunity in the population was ‘mythical‘”, adding “with the current Delta variant, this is not possible”.

Israel is the champion of the Pfizer injection

In the spring of 2021, before the emergence of the Delta variant, Israel had been the first country in the world to believe it had achieved herd immunity with the Pfizer injection.

But its very high rate of injection did not allow it to avoid a new wave with the establishment of a new absolute record of daily contaminations (11000/D or the equivalent for France of 70000 cases/D).

And the daily mortality followed despite the third injections. This resurgence of the disease made the Minister of Health recognize that the injection’s effectiveness rate did not exceed 39% and that it only lasted a few months. 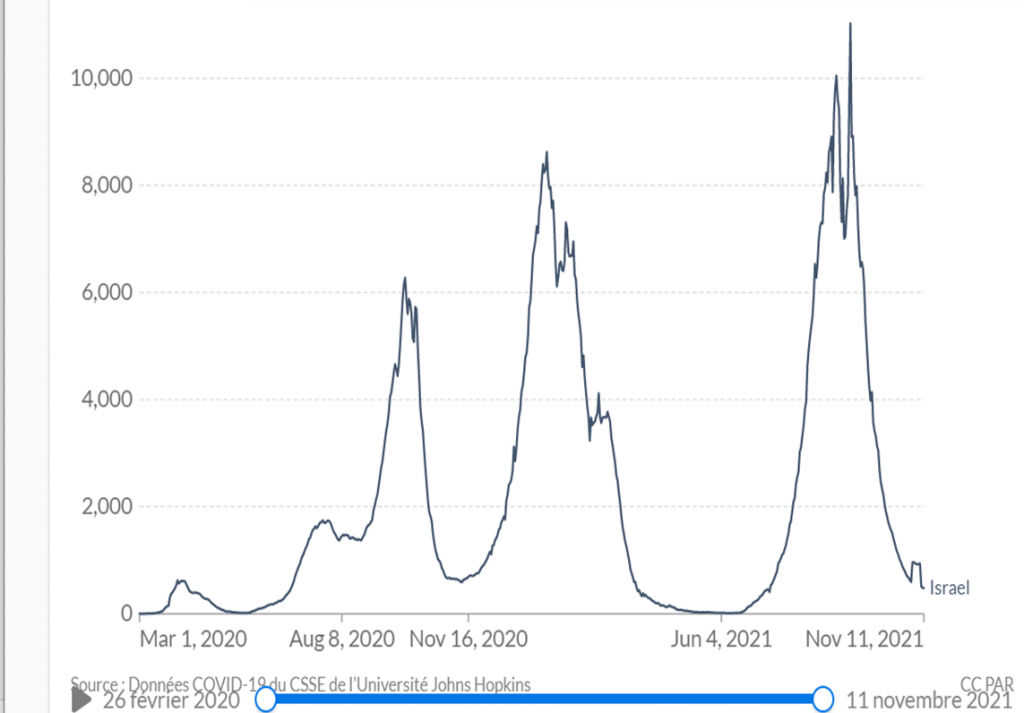 Speaking to Channel 13 TV News on August 5, 2021, Dr. Kobi Haviv, medical director of Herzog Hospital in Jerusalem, said that “85-90% of hospitalizations are of fully vaccinated people” and “95% of severe patients are vaccinated.” destroying vaccine propaganda claiming that the vaccine would protect against severe forms.

The Netherlands has over 75% of its population vaccinated,

But this great success of pseudo-vaccine sales is currently marked by an absolute record of daily contaminations (12,000 cases per day), which makes us consider new restrictive measures. 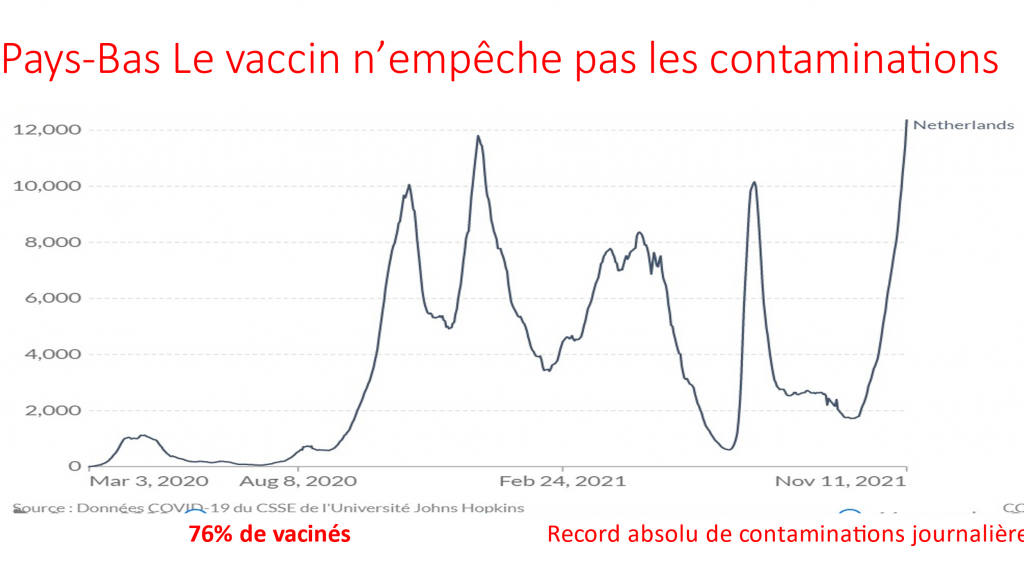 Here again, vaccination has proven to be unable to protect the population.

On November 13, Dr. Kuipers, a specialist in intensive care, declared[1]

“The suggestion has been made of herd immunity. Forget it!“.

“We are now working with several scenarios. One is: there will always be a large number of corona patients. With a substantial number of patients, we really need to organize care differently in the long run. Increase hospital capacity to accommodate all Covid-19 and regular care patients.”

But this success in the number of injections has not prevented it from suffering a real tsunami of contaminations with a number 4 times higher than the pre-injection peak. 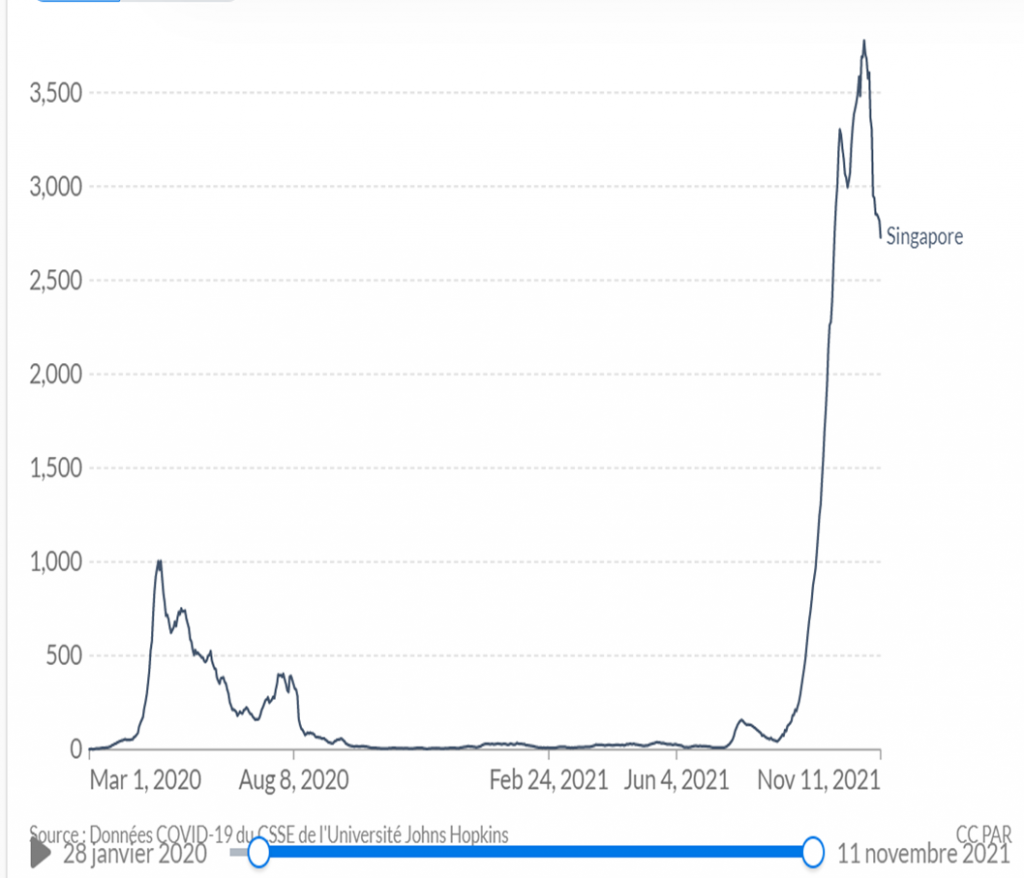 On Thursday, August 19, 2021, at a multi-conference of the ministry’s task force, Finance Minister Lawrence Wong warned:

“Singapore will not achieve herd immunity during the pandemic despite its high COVID-19 vaccination rate[2].”

“The path to becoming a COVID-resilient nation will be a long and difficult task. Even with very high vaccination rates, we will not achieve herd immunity.”

“Achieving 95% herd immunity to Delta is a myth. With the Delta variant now dominant in most countries, the target should instead be immunity to disease or prevention of severe illness and death from the virus.”

In June, the Korean media was pleased that herd immunity was within reach.

They even claimed that “it would be achieved by November[5]”. Ministry of Health spokesman Son Young-rae warned that:

“Even after herd immunity is achieved in November, face masks and other safety measures will still be needed.

But since October, their mirage is fading, the epidemic is exploding and so is the mortality: 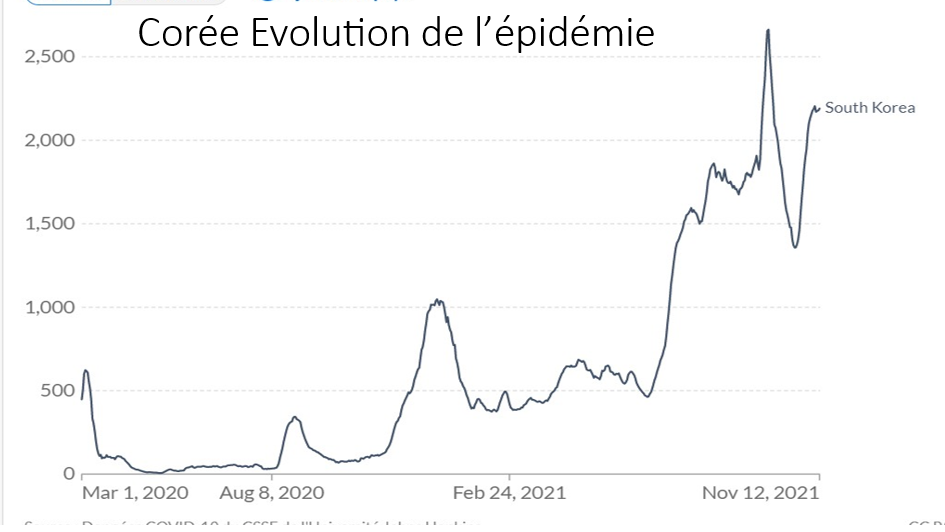 In October, the daily number of infections rose to 2.5 times that of the peak of the epidemic before vaccination (2600 vs 1000) and mortality followed. 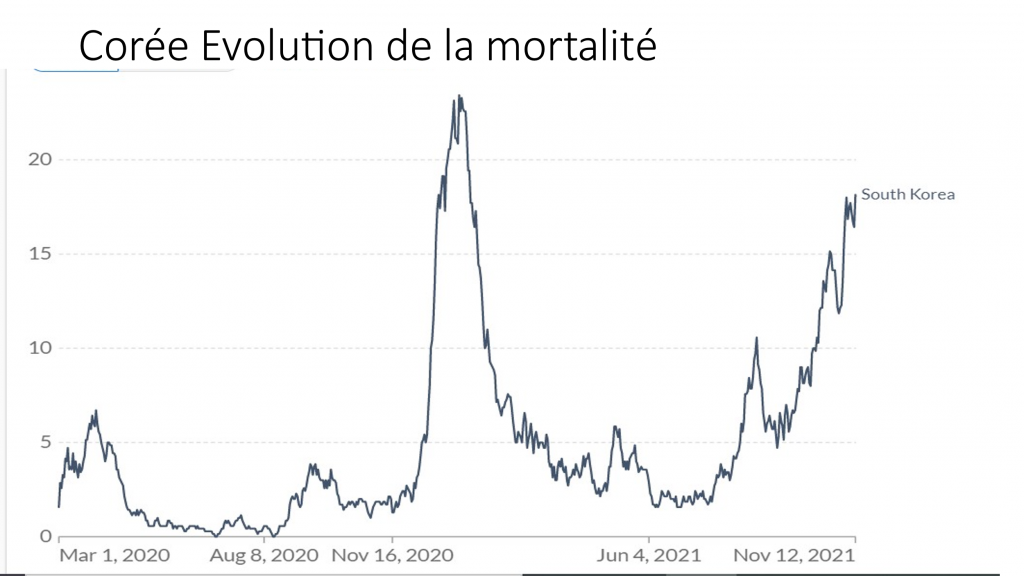 This shows that vaccines do not solve the Covid problem or the problem of health restrictions.

Germany has injected 70% of its population

But this success of the sales of pseudo vaccines did not avoid a strong resumption of the epidemic in July with an exponential growth since September with a number of daily contaminations (36000) largely exceeding the records of before “vaccination”. 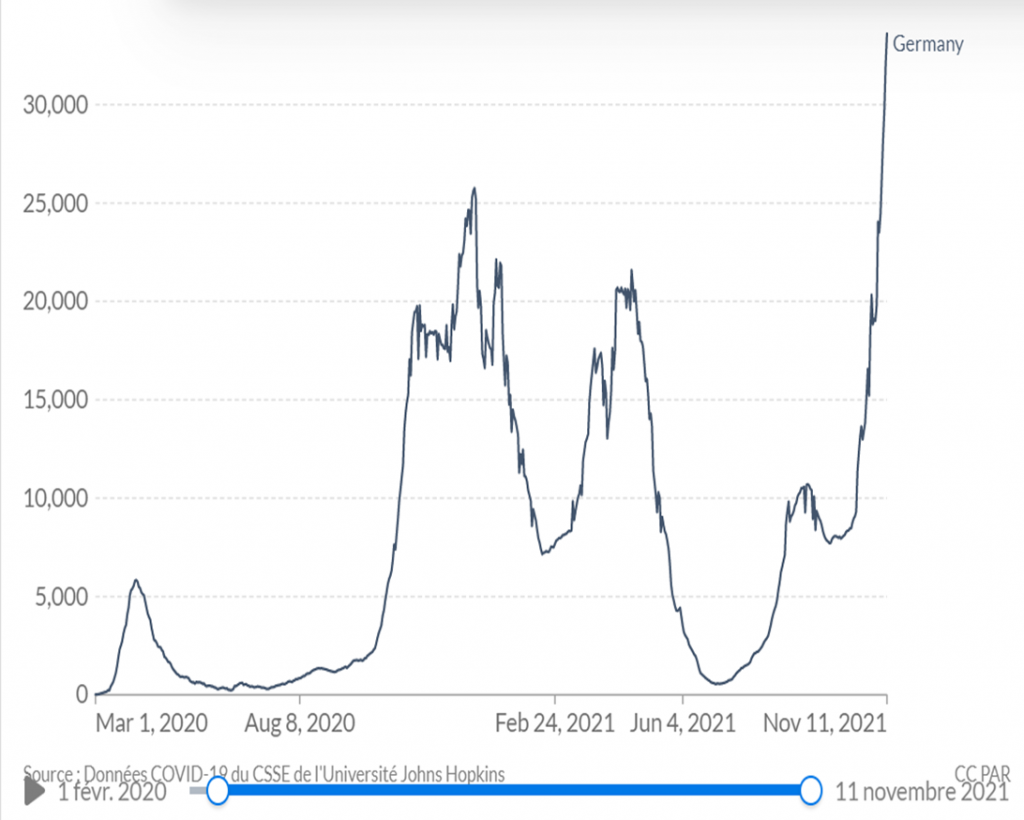 The inhabitants of Berlin’s government district are bidding a slow and silent farewell, without a statement, without a press release, to an illusion, to the goal that politicians have been pursuing since the beginning of the year: collective immunity.

“Unfortunately, I can hardly imagine at this point that we will achieve herd immunity,” said K. Lauterbach[6] a health expert of the center-left Social Democrats (SPD).

Vaccine euphoria has apparently given way to vaccine fatigue, and part of the population still does not want to be vaccinated, knowing that vaccine protection is much weaker and shorter than advertised and post-vaccination accidents more numerous. The country is gradually learning to live with the pandemic, but it is struggling, partly because all the consequences are not known and remain unpredictable.

The Danish population is more than 75% vaccinated,

But this high “vaccination” rate has been unable to prevent a sudden resurgence of the epidemic and the threat of further confinement. 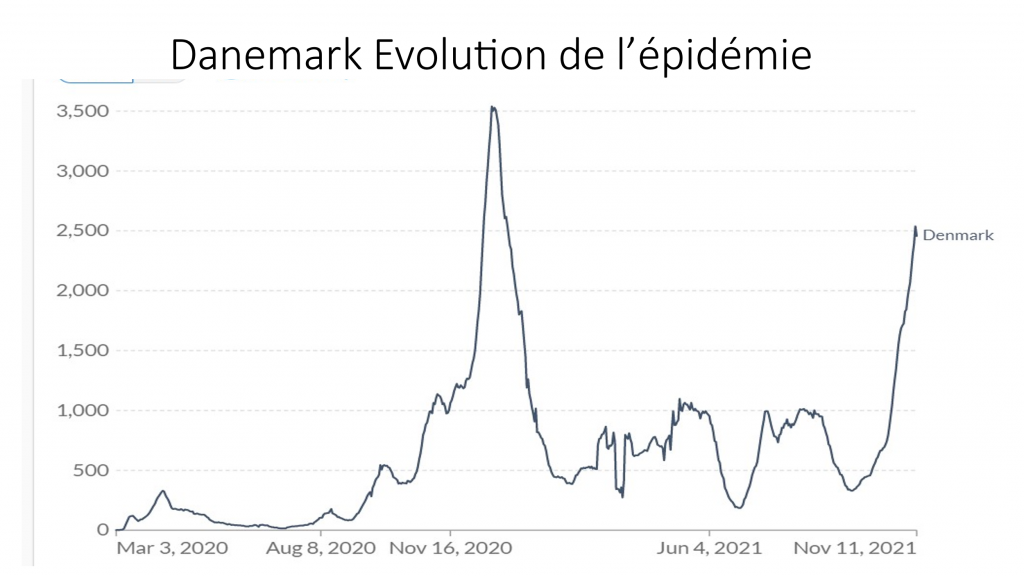 The Danish Infectious Diseases Agency SSI has stated that it no longer believes that herd immunity can be achieved in the country through vaccination,[7] which means that sars CoV 2 could continue to circulate for years.

“If vaccines were 100% effective against the variants currently in play and we had 100% vaccine coverage in people 12 years and older, then we could talk about achieving true herd immunity against the delta variant,” Krause said. “But unfortunately that’s not the reality; we can’t achieve that.”

“This means that it now makes sense to treat Covid-19 the same way we treat seasonal flu, and not respond to waves of infection with strict restrictions.” “It will be more reminiscent of the flu than before,” she added.

Iceland is the most vaccinated European country

Unfortunately, this vaccination coverage did not prevent a major recurrence of the epidemic. 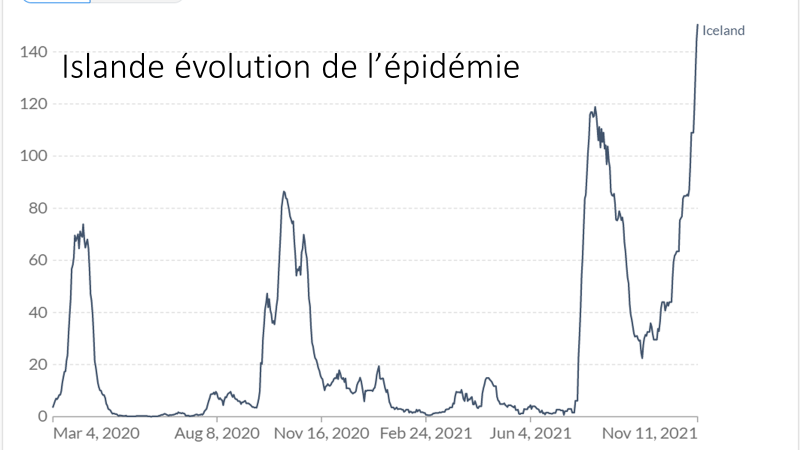 But since the new wave, he had to admit in an interview on public radio that :