The crisis, and especially the reaction of the ‘west’ to it, is much worse than I had feared.

The U.S. government and ‘western’ media claim that the World condemns Russia’s invasion of Ukraine.

That is however far from reality. It is only true if true if you believe ‘the world’ solely exists of the 5-eye spying cooperation (U.S., UK, Canada, Australia, New Zealand), the European Union, Switzerland, Japan and Singapore.

The view differs when you zoom out. 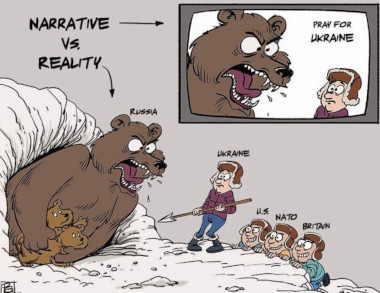 The much bigger ‘rest of the world’ has not condemned Russia but understands how the conflict came about. They blame, like political scientist John Mearsheimer, the U.S. for causing the crisis. This includes, as far as I can tell, all of Africa (54 states), South America, Central America, the Middle East, and all of Asia ex Japan and Singapore.

This rest of the world that did not condemn Russia includes several notable U.S. allies and ‘partners’ like Turkey (Nato’s second biggest army!), India, Saudi Arabia, the UAE and Israel.

The case shows how much the standing of the once unilateral superpower has been diminished.

Since 2014 the war in east Ukraine against the people of the Donbas regions has cost more than 14,000 lives. Some 10,000 of those were civilians on the Donbas side. The dying there continues as the Ukrainian army and its nazi battalions continue to shell the cities of Donetzk and Luhansk:

At least 136 civilians have been killed, including 13 children, and 400 have been injured since Russia invaded Ukraine last week, a United Nations agency said on Tuesday.

“The real toll is likely to be much higher,” Liz Throssell, a spokesperson for the U.N. human rights office (OHCHR), told a briefing, adding that 253 of the casualties were in the Donetsk and Lugansk regions in eastern Ukraine.

Over the last days I also read several commentators claiming that that the Russian ‘regime change’ incursion into Ukraine would not have the support of the Russian people and would set them up against their president. Here is news for them:

The sanctions put up against Russia will hurt its people. But due to global price increases they will be probably felt stronger in Europe and the United States and they may even cause mass starvation and revolutions in poorer countries of the ‘third world’.

Mark Sleboda has served as nuclear engineer in the U.S. Navy. He has studied at the London School of Economics. He has married a woman from Crimea and now lives in Moscow as a Russian citizen. He is a frequent commentator in Russian media. Sleboda has previously criticized president Putin for being too soft with the ‘west’.

His analyses and predictions are more dire than mine but he is probably right (thread edited for readability):

This is #theGreatDecoupling between the West and Russia. Economic linkages will be cut down to only energy and a few other commodities & chemicals that Europe is dependent on Russia for. The West controls and has weaponized their entire economy in their war to break Russia.

Political, social and cultural linkages will also be severed to a high degree. Weaning Russia off this dependence will be hard and immiserating. But with Chinese and some other Eurasian support, Russia may just weather it. The entire global economy will suffer as well.

But once the dust has settled and new domestic and import substitution formed – Russia will at least be economically & financially independent from the West. They will never again be able to weaponize their economic hegemony to coerce, blackmail, or wage war on Russia.

The same weaponized economic war too will also soon be turned on China and the Rest of the world’s holdouts from US-led Western Hegemony. The Unipolar world will truly be over, but the Multipolar world will be stillborn by US attempts to hang on to their hegemony. Instead US/Western pressure will directly result in the formation of an anti-Western bloc led by China and Russia for survival and independence. Neutrality will be difficult to maintain. A new Bipolar world is coming into being, just decades after the last ended.

The Golden Age of the Global Internet is also now over resulting not from Russia closing itself off, but by censorship and exclusion by Western and the social media platforms and the internet fixtures they control – because they don’t trust their own people to hear alternative perspectives and narratives and judge on their own. The world’s internet will now break down into regional spheres with limited connectivity. It will be a new, much smaller, less connected, more localized and divisive world.

We are of course already seeing the physical connections around the world break down – with closures of entire swathes of the globe’s surface to each others’ airlines and global shipping connections being severed one by one as we speak. Global distribution networks will be disrupted & chaos result for months. Because Russia & Ukraine are primary sources of so many of the world’s commodities – energy & food costs around the world will skyrocket. In the First world prices will go up, in the Third – starvation.

Ultimately the cause was the US-led West trying to maintain and extend their Hegemony, while they can and Russia resisting it. NATO expansion east in waves, US meddling and hybrid warfare to bring into power pro-Western/anti-Russian governments in formerly neutral, unaligned, national identity-divided post Soviet states was the endgame of this NATO expansion to geopolitically consolidate all of Europe under US-led Western Hegemony up to Russia’s borders.

Russia resisted this geopolitical flipping by color revolution in Georgia, Belarus & Ukraine. And now the ultimate target of this economic war on Russia is forcing regime change in Russia itself for having the temerity to resist the Hegemon’s geopolitical expansion right on her very borders.

The great Realist IR scholar Mearsheimer foresaw all of this. As did Kissinger, George Kennan, US Ambassador John Matlock and many others. They tried to warn what the consequences of the US trying to geopolitically flip Ukraine would be, but to no avail.

For Russia the only path forward, the goal to survive is, must be – separation, autarky (self-sufficiency), and independence from US-led Western Hegemony. 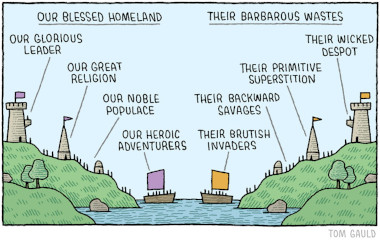 One thought on “Disarming Ukraine – Day 7”