It’s day 10 of the Russian special operation and in this commentary I will try to sum up some of the most critical developments.  So here we go:

First, the now obligatory map of the situation as of yesterday evening:

I won’t comment much because either it is self-evident to you and my commentary is not needed, or this looks like an imminent Ukrainian victory over a “miscalculating Putin” to you, in which case no comments of mine are going to help either.  So no more comments about the map for right now 🙂

END_OF_DOCUMENT_TOKEN_TO_BE_REPLACED

Moscow Kremlin has demanded from Biden or Blinken a waiver of sanctions to allow Iran deal to go through.

An innocuous tweet from Russia’s Permanent Representative to International Organisations in Vienna Mikhail Ulyanov earlier today in the afternoon said that he met with the EU Coordinator at the Vienna talks on Iran nuclear issue Enrique Mora and “raised a number of questions which need to be duly addressed now in order to ensure smooth civil nuclear cooperation with Iran.”

END_OF_DOCUMENT_TOKEN_TO_BE_REPLACED

Lambert and I both find this is the worst informational environment either of us have faced, orders of magnitude worse than the war in Iraq, …

Lambert and I, and many readers, agree that Ukraine has prompted the worst informational environment ever. We hope readers will collaborate in mitigating the fog of war – both real fog and stage fog – in comments. None of us need more cheerleading and link-free repetition of memes; there are platforms for that.

I ask readers and commentators here to live by the same standard. There are too many comments now for me to police. Please notify me via email if there are certain trolls or offenders who deserve to be excluded from this site.

Now back to Ukraine.

END_OF_DOCUMENT_TOKEN_TO_BE_REPLACED

1.- War and U.S. Military Doctrine: The armed conflict in Europe is directly related to U.S. military planning. The “Third Offset Strategy”, the “Interim Strategic National Security Guidance” and the advent of the NATO “Strategic Concept” of 2022, outline the US military plan for global domination. The Third Offset Strategy, proposed by Secretary of Defense Chuck Hagel and Deputy Secretary Robert Work, is a prospective for the adequacy of U.S. war potential and was born as a response to the accession of Crimea to the Russian Federation in 2014. Biden’s Strategic Guidance, adopted in 2021, is a doctrinal update that places emerging powers, led by Russia and China, at the center of its concerns. For its part, NATO has set out to update its Strategic Concept considering three pivotal ideas, among which is the adoption of a more global approach *These official plans of the United States and NATO explain why Russia is legitimately concerned about its security*.

END_OF_DOCUMENT_TOKEN_TO_BE_REPLACED

Volodymyr Zelensky is the current President of Ukraine. He was elected in a landslide victory in 2019 on the promise of easing tensions with Russia and resolving the crisis in the breakaway republics in east Ukraine. He has made no attempt to keep his word on either issue. Instead, he has greatly exacerbated Ukraine’s internal crisis while relentlessly provoking Russia. Zelensky has had numerous opportunities to smooth things over with Moscow and prevent the outbreak of hostilities. Instead, he has consistently made matters worse by blindly following Washington’s directives.

END_OF_DOCUMENT_TOKEN_TO_BE_REPLACED

By evoking “a gang of drug addicts and neo-Nazis” in power in Kiev, President Putin has shocked many. The Atlanticist press tried to present him as a mental patient. However, the facts are there: the power in Ukraine is verily occupied by a bunch of drug addicts who stole the gas revenues. A racial law has been passed. Monuments to the Nazi collaborator Stepan bandera have been erected. And two Nazi battalions have already been incorporated into the regular army.

END_OF_DOCUMENT_TOKEN_TO_BE_REPLACED 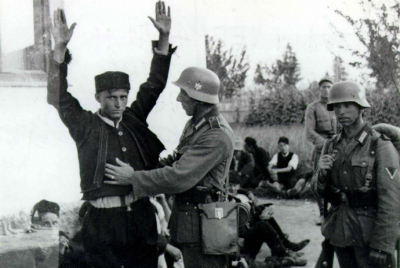 War against the Soviet Union was what Hitler had wanted from the beginning. He had already made this very clear in the pages of Mein Kampf, written in the mid-1920s. As a German historian, Rolf-Dieter Müller, has convincingly demonstrated in a well-documented study, it was a war against the Soviet Union, and not against Poland, France, or Britain, that Hitler was planning to unleash in 1939. On August 11 of that year, Hitler explained to Carl J. Burckhardt, an official of the League of Nations, that “everything he undertook was directed against Russia”, and that “if the West [i.e., the French and the British] is too stupid and too blind to comprehend this, he would be forced to reach an understanding with the Russians, turn and defeat the West, and then turn back with all his strength to strike a blow against the Soviet Union”. This is in fact what happened. The West did turn out to be “too stupid and blind”, as Hitler saw it, to give him “a free hand” in the east, so he did make a deal with Moscow — the infamous “Hitler-Stalin Pact” — and then unleashed war against Poland, France, and Britain. But his ultimate objective remained the same: to attack and destroy the Soviet Union as soon as possible.

END_OF_DOCUMENT_TOKEN_TO_BE_REPLACED

The US Defense Threat Reduction Agency (DTRA) program in the Republic of Georgia. Photo: Ministry of Internal Affairs of Georgia

While the US is planning to increase its military presence in Eastern Europe to “protect its allies against Russia”, internal documents show what American “protection” in practical terms means.

The Pentagon has conducted biological experiments with a potentially lethal outcome on 4,400 soldiers in Ukraine and 1,000 soldiers in Georgia. According to leaked documents, all volunteer deaths should be reported within 24 h (in Ukraine) and 48 h (in Georgia).

END_OF_DOCUMENT_TOKEN_TO_BE_REPLACED

We’re risking a very fast, very radioactive World War 3 to defend the “democracy” of a nation whose government bans opposition parties, imprisons political opponents, shuts down opposition media, and takes all its orders from Washington due to a US-backed coup in 2014.