The Saker has reproduced the transcript of a talk Russia’s Foreign Minister Sergej Lavrov has given three days ago. It is quite long with a Q&A at the end but it is a very good history lesson on how we got to the point that Russia felt it had to intervene in the Ukraine.

Here are just a few graphs of it. I recommend to read it all of it:

This meeting takes place against the backdrop of events now occurring in Ukraine. Russian President Vladimir Putin has repeatedly spoken at length about the origins of this crisis. I would like to briefly reiterate: this is not about Ukraine. This is the end-result of a policy that the West has carried out since the early 1990s. It was clear back then that Russia was not going to be docile and that it was going to have a say in international matters. This is not because Russia wants to be a bully. Russia has its history, its tradition, its own understanding of the history of its peoples and a vision on how it can ensure its security and interests in this world.

This became clear in the late 1990s-early 2000s. The West has repeatedly attempted to stall the independent and autonomous development of Russia. This is rather unfortunate. From the start of President Vladimir Putin’s “rule” in the early 2000s, we were open to the idea of working with the West in various ways, even in a form similar to that of an alliance, as the President has said. Sadly, we were unable to do this. We repeatedly suggested that we should conclude treaties and base our security on equal rights, rejecting the idea of strengthening one’s security at the expense of another.

Neither were we able to promote economic cooperation. The European Union, which back then showed some signs of independent decision-making, has now devolved toward being completely dependent on the North Atlantic Treaty Organisation and the US. The story of Nord Stream 2 was the highlight of this change. Even Germany, which defended its interests in the project to the very end, was persuaded that the “project was not in its interests.” Germany and its people were told what their interests were by people on the other side of the Atlantic. Many other international areas were blocked despite our commitment to close cooperation on an equal basis.

Germany’s traitorous role towards Russia, especially under chancellor Angela Merkel, is laid out throughout the piece. The current chancellor Olaf Scholz, never a smart man, capitulated to U.S. demands to sanction Russia and thereby committed Germany to economic suicide. 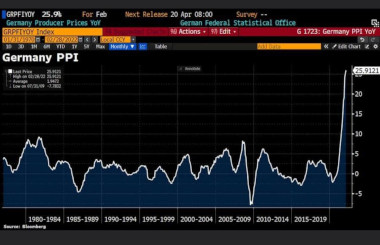 That spells death for Germany’s machine industry. It is said to see my country come down like this.

Hey Olaf, when the U.S. illegally invaded Iraq for absolutely no good reason how many sanctions did Germany apply to it?

Russia has at least cited sound and understandable, if not fully legal, reasons for its current acts. It was by the way you, Olaf, and your predecessor who have let it come to this. Why didn’t you write a letter to Putin that declared that Germany will veto NATO membership for the Ukraine. That might have solved the whole problem.

There is some talk that Russia has screwed up its campaign and some even hope that it might be losing the war. That’s nuts.

Back when I was a military officer we ran yearly large scale ‘free running’ maneuvers. Over nearly four weeks my tank company had to switch positions several times a day and march and ‘fight’ in between. The first week was cumbersome with lots of errors made by everyone. The second week was worse. Everyone was sleep deprived and folks screamed at each other. We had several accidents and twice parts of the company missed turns and got lost at night. During the third week things became gradually better and more routine. The drivers knew where to put their tanks without much command. The camouflaging done by the loaders and gunners was fast. The food that found its way to us was still hot and maintenance was done in no time. In the fourth week it was all pure fun.

The reason behind it was that people needed to learn by doing. Before the maneuvers everyone had been ‘fully trained’. But a few days on the training range do not give the experience one needs in the real world. Driving and ‘fighting’ through real villages and cities, real camouflaging against an ‘enemy’ airforce, real dueling in the open landscape day after day are different than training range time.

Russia’s forces are now in their routine mode. They will now grind down what is left of the Ukrainian forces.

According to the Pentagon the Russian airforce yesterday flew 300 sorties over Ukraine, mostly at night. That are 50% more per day than last week. That means 300 Ukrainian weapon factories, ammunition depots, convoys and fighting position get destroyed every day, day after day. How long will it take until there are no more targets?

Andrew Milburn, a former Marine colonel, is in the Ukraine from where he reports for Task and Purpose:

The Russians are already adapting, and by doing so are narrowing the Ukrainians’ tactical edge. The one-sided culling of Russian armored columns that characterized the opening days of the war, and kept YouTube subscribers around the world happy, are a thing of the past. The Russians now lead their formations with electronic attack, drones, lasers and good-old-fashioned reconnaissance by fire. They are using cruise missiles and saboteur teams to target logistics routes, manufacturing plants, and training bases in western Ukraine. Realizing that the Ukrainians lack thermal sights for their stinger missile launchers, the Russians have switched all air operations to after dark. It may be for this same reason that Russian cruise missile strikes in western and southern Ukraine have also been at nighttime.

The Russians have learned to play to their strengths. While Ukrainian soldiers mock their Russian counterparts, they are deeply respectful of Russian artillery, an asset that the Russians are using more frequently to compensate for their infantry’s deficiencies. Several snipers I spoke with recently agreed that the Russians’ indirect fire capability was the most concerning — a result of sheer reckless mass rather than technical skill. They told some hair-raising stories to illustrate their point, and one amusing one: Ukrainian soldiers defending Kyiv commute to the battle in their own vehicles. After a recent three-day insertion, the sniper teams returned to their extraction site to find their cars all flattened by Russian artillery – a contingency apparently not covered by their insurance plans.

Overconfidence may obscure for the Ukrainians one salient fact about this conflict: Time is not on their side.