We are meeting at a both challenging and dramatic moment. Crisis situations are growing, and the international security situation is deteriorating rapidly.

END_OF_DOCUMENT_TOKEN_TO_BE_REPLACED

No sooner than Russian Foreign Minister Sergey Lavrov returned to Moscow after the SCO ministerial in Tashkent, US Secretary of State Antony Blinken’s pending request for a conversation was scheduled late Friday evening. This has been their first conversation since the war began in Ukraine in February.

END_OF_DOCUMENT_TOKEN_TO_BE_REPLACED

By Guilherme Wilbert for the Saker Blog

Russian Foreign Minister Sergey Lavrov stated on 06/24/2022 that the European Union and NATO appear to be carrying out a military coalition for a war against Russia. The statement was given in Baku in Azerbaijan during an interview.

END_OF_DOCUMENT_TOKEN_TO_BE_REPLACED

The Saker has reproduced the transcript of a talk Russia’s Foreign Minister Sergej Lavrov has given three days ago. It is quite long with a Q&A at the end but it is a very good history lesson on how we got to the point that Russia felt it had to intervene in the Ukraine.

Here are just a few graphs of it. I recommend to read it all of it:
END_OF_DOCUMENT_TOKEN_TO_BE_REPLACED

It is absolutely necessary that Moscow holds the line for the sake of a new security order in Europe and a sustainably stable world order in our time. 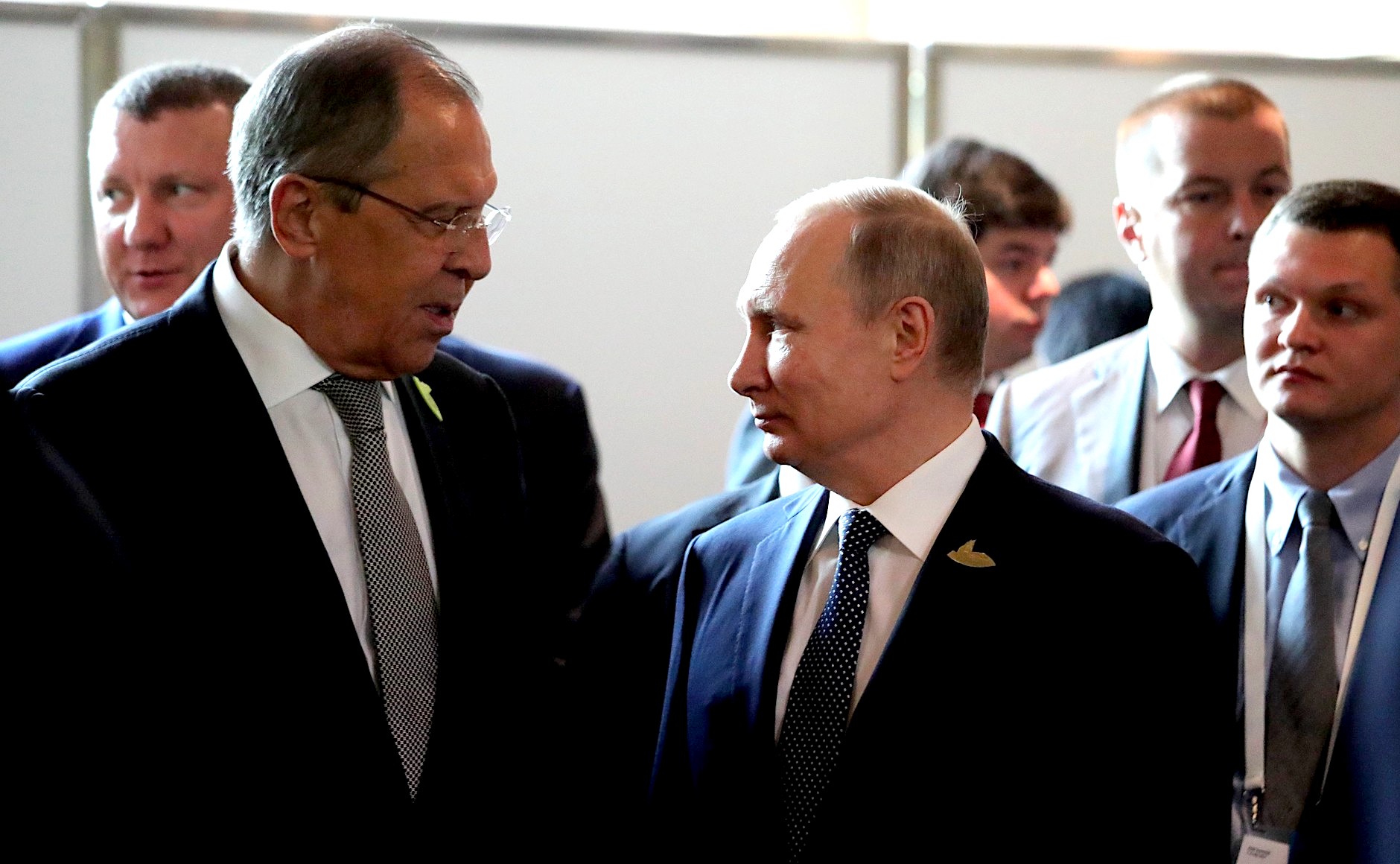 “They must understand,” Sergei Lavrov said in one of his many public statements last week, “that the key to everything is the guarantee that NATO will not expand eastward.”

The Russian foreign minister has repeated this thought almost ad infinitum lately. He speaks, of course, of the Biden administration and the diplomats who bear its messages to others.

END_OF_DOCUMENT_TOKEN_TO_BE_REPLACED

Russian Foreign Minister Sergei Lavrov on Monday slammed Western countries for suggesting the Syrian government carried out a chemical attack earlier this month, without offering convincing proof to back up these claims.

END_OF_DOCUMENT_TOKEN_TO_BE_REPLACED

“We are trying to figure out effective ways to slow down or prevent it.”

Indeed, they are. For that, the US has launched full-scale wars in close vicinity to the region (not to mention local clashes and a “limited” use of drones on a wider number of countries), slaughtered hundreds of thousands of Iraqis and Afghans, depriving them of the basic human right – the right to live; successfully destabilized the situation in their “Greater Middle East”, flooded the whole of Central Asia with Afghan opium and heroin (with metastasis reaching as far as Russia and Western Europe). And after that Ms. Hillary is trying to present her country as a champion of human rights and finds it OK for herself to criticize others.

END_OF_DOCUMENT_TOKEN_TO_BE_REPLACED

The U.N. Security Council met shortly after the July 18 attack that decapitated the command of the Syrian security forces. The two sessions that followed addressed the Resolution proposals submitted by the Western powers and Russia. It was incumbent upon the Council to condemn terrorist action on principle, as it does in all similar circumstances. The practice is to unanimously adopt a declaration and have it read by the sitting president of the Council, in this case the Columbian, Nestor Osorio. Protocol dictates that he present his condolences to the member state under attack.

END_OF_DOCUMENT_TOKEN_TO_BE_REPLACED

The Syrian authorities have welcomed crisis settlement proposals from the Joint Special Envoy of the United Nations and the League of Arab States for Syria, Kofi Annan.

END_OF_DOCUMENT_TOKEN_TO_BE_REPLACED

Western powers are privileged to interpret interests and ethics at their own will due to their obvious dominance of public opinion. They label the 12 countries who voted differently to them at the UN as being ‘unethical.’ China should never be fooled by this hypocrisy.

END_OF_DOCUMENT_TOKEN_TO_BE_REPLACED

Like the star gazers who last week watched the longest total solar eclipse of the 21st century, diplomatic observers had a field day watching the penumbra of big power politics involving the United States, Russia and China, which constitutes one of the crucial phenomena of 21st-century world politics.

It all began with United States Vice President Joseph Biden choosing a tour of Ukraine and Georgia on July 20-23 to rebuke the Kremlin publicly for its “19th-century notions of spheres of influence”.  Biden’s tour of Russia’s troubled “near abroad” took place within a fortnight of US President Barack Obama’s landmark visit to Moscow to “reset” the US’s relations with Russia.

Clearly, Biden’s jaunt was choreographed as a forceful demonstration of the Barack Obama administration’s resolve to keep up the US’s strategic engagement of Eurasia — a rolling up of sleeves and gearing up for action after the exchange of customary pleasantries by Obama with his Kremlin counterpart Dmitry Medvedev.  Plainly put, Biden’s stark message was that the Obama administration intends to robustly challenge Russia’s claim as the predominant power in the post-Soviet space.

Biden ruled out any “trade-offs” with the Kremlin or any form of “recognition” of Russia’s spheres of influence.  He committed the Obama administration to supporting Ukraine’s status as an “integral part of Europe” and Ukraine’s Euro-Atlantic integration.  Furthermore, in an interview with the Wall Street Journal, Biden spoke of Russia’s own dim future in stark, existential terms.

END_OF_DOCUMENT_TOKEN_TO_BE_REPLACED

American Vice-President Joseph Biden at the Munich Security Conference in early February pledged to “press the reset button” with Russia.

Since then prominent Washington officials have repeated their intention to reset, reboot and so forth relations with Russia but have, starting with Biden at Munich, not relented in any substantive manner on any of the behaviors and projects that have antagonized Moscow.