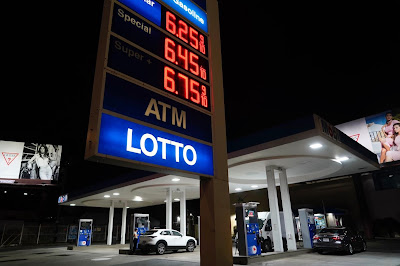 The U.S. empire’s social stability can no longer rely on buying off the workers within its own borders. When Che Guevara observed that international worker solidarity gets undermined by the proletarians in the core imperialist countries receiving special benefits compared to the proletarians in the exploited countries, he was right. But with the contraction of capital, and the consequential introduction of neoliberalism to keep capital afloat, this has changed. Every year, the masses within the United States face conditions that are more like the ones in the Global South. The global wealth gap is still the primary wealth gap in a macro sense, but this widening of the U.S. empire’s internal inequality represents a contradiction which can bring about the empire’s defeat from within. And therefore a major step towards eliminating the global gap.

By provoking Russia into intervening in Ukraine, the imperialists have exacerbated this problem they had already created for themselves. The price and resource crises caused by this conflict are anticipated to drive around 40 million worldwide into extreme poverty, with many among them being Americans. The main victims have as usual been the peoples of the Global South, but the inflation caused by Washington’s sanctions are also harming a U.S. population that’s already been thrown into chaos by the pandemic. Psychologically, what’s hitting the U.S. masses is the sense that they lack economic prospects due to circumstances beyond their control. Washington isn’t undoing its sanctions—why would it when sanctions are its only way to get back at an increasingly victorious Russia—so the prices aren’t going back to normal. “Looking ahead, expect surging prices and additional interest rate hikes to pose continued downside risks to consumer spending this year,” said Lynn Franco, director of economic indicators for the Conference Board, in a report from last week.

These sanctions are hurting the U.S. bloc more than they’re hurting Russia. Not just economically, but in terms of international credibility. As The Saker has assessed, “Russia and China are calling out the hypocrisy underneath the ugly and foolish faces of all in the hegemonic declining powers selling lies, by every method that is possible. They mock the evil, they speak against it, they expose it, and they are and will fight against it. That is why the ugly and foolish-faced are running the Cancel Russia campaign because they are being driven into a corner and cannot stand it any longer.” The vast majority of the globe hasn’t been won over by Washington’s demands to participate in the sanctions because it sees that the U.S. doesn’t genuinely care about “human rights” or “sovereignty.” Afghanistan, Iraq, Libya, and Washington’s other recent victim countries have shown this, and this loss in globally perceived credibility has caused U.S. imperialism to decline. Now we’re seeing the impacts of this decline in Washington’s failure to persuade numerous powers it used to be able to rely on.

With such widespread global opposition to the imperialists, the collapse of the dollar as the world’s reserve currency is made all the more likely. Even the analysts who reject the assertion that the dollar is in freefall admit that it’s heading in such a direction. As one market blogger assessed in March:

….another skeptic [of the dollar decline story] emerged, this time the global head of FX EM at Morgan Stanley, James Lord who in the bank’s Sunday Start note asks “Have Sanctions Undermined the Dollar’s Dominance?” and answers: no… but only for now, and warns that over the long run it is likely that [NY Fed staffer Zoltan] Pozsar’s dour view will be validated, as the act of sanctioning Russia and expelling it from the western financial system ‘likely calls into question the idea of a risk-free asset that underpins central bank FX reserves in general, and not just specifically for the dollar and US government-backed securities.”

This reality of an accelerated global transition away from the dollar in the long-term means that the benefits U.S. capital has been enjoying throughout this conflict are temporary, and ultimately sure to make the fall even harder. The dollar has been reaching a multi-decade high against its trading partners, which has compensated for how U.S. inflation is at its highest level in over 40 years. But the imperialists are living on borrowed time. When this trend within the dollar comes back down, that inflation’s impacts will be fully felt. Capital will be forced to contract further, at the same time that capital’s required social stability is being undermined. The masses are suffering under this crisis that the imperialists have manufactured. And when capital further weakens, revolution will become more possible than ever, because as Stalin concluded, the proletariat’s victory is likeliest where capital is weakest.

The petrodollar’s decline is accelerating at perhaps an even greater rate due to this war. According to the Navhind Times:

The Saudi Arabians made a deal with the Americans during the Nixon era, that they would only invoice their oil exports in dollars. That has been the source of global dominance of the dollar. During the mid-1970s after the first oil shock, the earnings of Saudi Arabia and other Middle East oil producers were so very large and all in dollars, that they were unable to absorb all the windfall gain. This was even after spending lavishly on arms and ammunition. So those dollars got deposited in Wall Street and recycled as hefty loans to South America, which eventually led to the debt crisis there. This was the story of petro dollars and their dominance. There are the first cracks now visible in that dollar edifice, built on what became known as the ‘petro dollar’. The Saudis for the first time have agreed to sell oil to China in exchange for Chinese currency (which will presumably be used to buy Chinese exports).

The new cold warriors have gloated over the dilemma that their Ukraine proxy war has put China in, celebrating how China needs to tread carefully to avoid undoing its alliances. But as long as China continues to be cautious, it can keep dismantling Washington’s world order. And by extension, the closer it can bring the imperialist countries towards revolution. The weakening of imperialism turns revolution in the core countries into a practical necessity, provoking the core’s bourgeoisie to compensate for the threats to capital with destabilizing measures which worsen contradictions. Measures such as wars and anti-poor policies, which go hand in hand. As Castro said in 1974 in response to imperialism’s recent pivot towards the petrodollar system:

The apologists of the industrialized bourgeois societies who had built all

their ideological hopes on capitalism without contradictions, are now

are taking place and strikes are multiplying with increasing numbers of

workers participating. Also worsening are the problems relating to

intensified work, the anguished race between salaries and the rise in

prices of consumer goods, the reduction of pensions and social security in

general, the growing poverty of large groups of the poor in the bourgeois

metropolises themselves, the choking problems of education, public health,

transportation and housing, and others which unceasingly hurt the large

working classes…the imperialists refuse to resign themselves to the reality

that the system they have foisted on the world is in crisis, They try to

escape from that crisis by any means whatever, even by war, if that is

possible, and by unloading onto the shoulders of their workers and the

underdeveloped countries the weight of sacrifices.

Half a century later, we’re seeing the logical conclusion of these trends. The masses within the imperial center have been devastated by decades of austerity, the imperialists are losing their global economic base, and the petrodollar (which was the tool for maintaining capital in the face of its new stage of decline fifty years ago) is losing influence. The hope of the imperialists is that though Ukraine clearly can’t win against Russia at this point, the conflict will at least weaken Russia enough for Washington to balkanize and colonize the country, allowing for a destabilized Eurasia and a reversal of U.S. imperial decline. But as with all the fantasies of grand comebacks that declining empires have, this fantasy won’t come true. The multipolar world will continue to emerge, and revolution in the core will continue to draw closer.