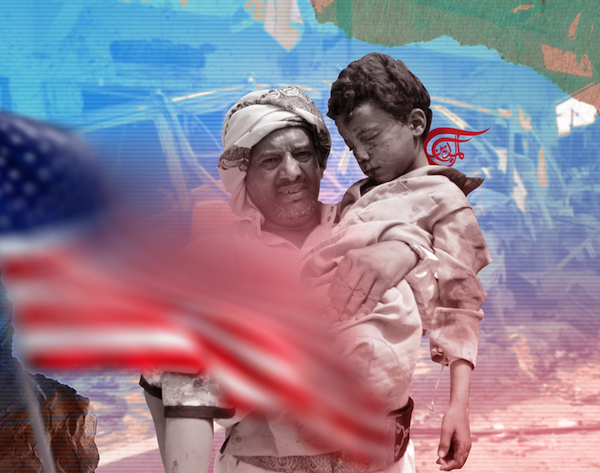 Parents were angry at the Biden administration’s resumption of weapons sales to Saudi Arabia on August 2, one week ahead of the 4th anniversary of the Yemen school bus children attack on August 9.

Younis Al-Qatabri is the only survivor from the Saada school bus attack who still suffers from shrapnel in his head and face after recovering from fractures in one of his legs that made him bedridden at home for the last couple of years.

Al-Qatabri explained that three out of the seven shrapnel were removed at the Modern European Hospital in Sanaa, but the remaining are still in his ear and nose and require plastic surgery.

Ali Al-Qatabri is one of over 50 parents whose children were killed or injured in the US-supplied bomb that hit the children school bus on August 9, 2018, in a crowded market in Dhahyan city of Sadaa governorate.

“I swear yesterday [August 9] was a painful memory,” Al-Qatabri said in pain on August 10. “I remembered the bus, the shreds, and the blood. It was an incident that no one could have expected.”

CNN, citing Health Minister Taha Al-Mutawakil’s news conference on 10 August 2018, said that “among the 51 people who died in the airstrike, 40 were children,” and that “of the 79 people wounded, 56 were children.”

Human Rights Watch (HRW) said the bomb that hit the bus is an American “GBU-12 Paveway II… with other markings identifying Lockheed Martin.”

After the airstrike on August 9, 2018, Saudi-led coalition Spokesperson Turki Al-Maliki denied targeting children claiming to the Saudi-owned Al-Hadath Channel that they targeted “missile launchers from Houthi militias” who were on top of the bus.

Al-Maliki also told CNN that the airstrike was aimed at a “legitimate target”, adding, “No, there were no children in the bus. We do have high standard measures for targeting.”

On the second day, August 10, 2018, the coalition promised to investigate it after UN Secretary-General Antonio Guterres called for “an independent investigation.”

On September 1, 2019, the Saudi-led coalition revealed the results of its investigation, regretting the attack and claiming it will punish the perpetrators and offer “compensations” to the victims.

“There is no [UN] organization supporting me; even [the Ansarullah’s] Institution of the Wounded,” Younis’ father said, denying receiving any official aid for treating his son. “Only some people supported me,” he added, referring to local philanthropists.

“The words from the coalition that ‘those who are responsible shall be punished’ are merely hollow words,” Onur Sinan Guzaltan, political scientist and lawyer told Al Mayadeen English.

When the Saudi coalition denied targeting any children on the bus, Al-Masirah TV broadcast a video of the children enjoying their moments in the bus before the airstrike hit, leading to international condemnation and calls for an independent investigation.

The UN Secretary-General António Guterres, in a statement the same day, condemned the airstrike and called for an “independent and prompt investigation.”

HRW in September 2018 said this attack is “an apparent war crime,” adding that “countries should immediately halt weapons sales to Saudi Arabia and support strengthening a United Nations independent inquiry into violations by all parties to Yemen’s armed conflict.”

A Saudi state-owned newspaper reported on August 10 that the coalition had opened a probe into the incident although the UN call was clear about the need for an “independent investigation”.

James Mattis, US Defense Secretary whose country was providing the Saudi coalition with intelligence and weapons, said on August 12 that he is sending a “three-star general into Riyadh” to help with inquiries into this airstrike, according to CNN.

On September 1, 2019, the coalition revealed the results of its probe conducted by the Joint Incidents Assessment Team (JIAT). It regretted what it called “mistakes” and said it will punish those “who made these mistakes” and offered “compensations” to the victims.

Four years have passed, and the Saudi-led coalition has neither persecuted anyone nor has it offered compensations like basic medications, to say the least, for the injured children like Al-Qatabri whose father said if his son received medical treatment abroad, his condition would become a lot better, thus alleviating his pains.

“Law is a political instrument, and especially the International Law, which is in favor of the strong,” Guzaltan told Al Mayadeen English.

“The right way to impose punishment for the attack on civilians in Yemen is for all the nations that are against the US-collaborator administrations in the region to act in a unified manner,” added Guzaltan.

Amir Jahaf, president of Insan Organization for Rights and Liberties, told Al Mayadeen English that “it’s natural that the coalition will not punish the perpetrators… and it has repeated the phrase (the criminal will be punished) in many massacres it committed and claimed they were mistakes.”

Rejection of perpetrator to be an investigator

Zaid Tayyeb, a father of three children killed in the school bus attack, condemned the Biden administration’s move to approve sales of weapons to Saudi Arabia on August 2, one week ahead of the 4th anniversary of the attack carried out by a US-supplied bomb, killing dozens of children all under the age of 16.

“Resuming weapons sales to Saudi Arabia makes the US directly complicit in killing my 3 children,” Tayyeb told Al Mayadeen English in an interview via Facebook Messenger.

“I would like to tell the US that no matter how much effort you paid to make this crime forgotten and to sell forbidden weapons to Saudi Arabia to kill the Yemeni people and break their will, you are deemed to fail,” Tayyeb added.

Resuming sales of weapons to Saudi Arabia is “a confirmation that the US is still the official sponsor of the war against the Yemeni people,” Jahaf, president of Insan Organization, said.

“Yemen is only one example in the long list of US war crimes,” Guzaltan told Al Mayadeen English.

“Over the last 70 years, US imperialism has either committed or helped proxies to commit war crimes all over the world.”

“And the best response that can be given against the US, would be the unification of the entire humanity, starting from the nations of West Asia,” said Guzaltan, the lawyer.

“The court that is to prosecute the US would be the ‘Court of Humanity’,” explained Guzaltan.

Tayyeb rejected the results of the investigation because “the team’s members formed to investigate the crime are from Saudi Arabia and the UAE, the countries that targeted the bus.”

“How can the criminal be an investigator?” wondered Tayyeb, asking for an independent investigation.

“For the compensation, it was fake,” said Tayyeb, calling the coalition to reach out to Ansar Allah leader Sayyed Abdul-Malik Al-Houthi to form a joint committee to investigate the attack and discuss ways to resolve it.

Asked how he is going to seek justice for his children and ensure accountability if these attempts failed, he said, “There is the International Criminal Court that may seek justice for us by persecuting criminals.”

When the attack on the bus happened, the US was still providing the Saudi coalition with intelligence-sharing, military advice, logistical support, and information about potential targets.

“It is now an undeniable fact that Saudi Arabia has committed crimes against humanity in Yemen,” said Guzaltan, the lawyer. “One example could be the attack that targeted children on August 9.”

“Many international organizations including the United Nations, confined themselves to only condemn the attack,” Guzaltan told Al Mayadeen English in an email interview.

“The investigation on this inhumane attack, led by the Saudi officials, is only a concocted act and no solid outcome should be expected from it,” Guzaltan noted.