A typical U.S. attack on a foreign country begins with a swarm of cruise missiles which will disable the countries basic infrastructure. The U.S. attack on Iraq and other countries demonstrated that electricity and water supply will be gone in first days of a U.S. waged war.

Over more than 200 days the Russian special military operation in Ukraine had never attacked the basic infrastructure of the country. When the Ukraine used its electrified railway network to bring in weapons from the ‘west’ the Russian forces only took out electric substations that supplied the railway. But it never attacked the general electricity production for the population. The lights in Ukraine staid on.

One thus wonders about the Ukrainian decision makers and their ‘western’ intelligence minders who thought that attacking electricity networks under Russian control would somehow benefit their cause.

The Ukrainian military has for weeks attacked the Zaporizhzhia nuclear power plant, since early March under Russian control and guarded by Russian troops, with artillery strikes. Yesterday the last of the plant’s six reactors had to shut down after its connection to external emergency power supply was destroyed during another Ukrainian artillery attack. (The line was later restored.)

It was not the only target of Ukrainian infrastructure attacks. As British intelligence asset Bellingcat mouthpiece Christo Gorzev tweeted gleefully:

Belgorod is a city in Russia a few miles north of the border to Ukraine.

Yesterday’s report by the Russian Defense Ministry about its war effort complained about systematic Ukrainian attacks on the electricity infrastructure of Donetsk city and other places:

In order to destabilize the situation in the territory liberated by the Russian Armed Forces and the suffering of civilians, the Kiev regime continues its deliberate shelling of energy infrastructure: generating facilities, transformer substations, and power lines.

At the same time, as a result of aimed fire on the transformer substation on September 6 and the power line on September 8, the city of Energodar was twice remained without electricity.

On September 1, three mines of the Donetsk Coal Energy Company, where dozens of miners were trapped underground, were de-energized as a result of the strike.

Yesterday, September 10, 19 transformer substations in the Petrovsky district of Donetsk were de-energized due to shelling by the Ukrainian Armed Forces. More than 1,600 civilian objects were remained without electricity as a result of the shelling.

It’s important to say that the daily strikes against civilian infrastructure are carried out by the Kiev regime in a deliberate and targeted manner.

By systematically attacking the power infrastructure in Russia and in Russian held territory the Ukrainian government has launched deliberate terror attacks against the populations in those areas.

It seemed to have forgotten the remarks of Russian President Vladimir Putin who had said:

[E]veryone should know that, by and large, we have not started anything in earnest yet.

Yesterday evening Russian cruise missiles were launched from Russian ships in the Black and the Caspian Sea. They were targeted to interrupt, not yet destroy, four Ukrainian power plants and to temporarily disable the Ukrainian electricity network:

Russia attacked power stations and other infrastructure Sunday, causing widespread outages across Ukraine as Kyiv’s forces pressed a swift counteroffensive that has driven Moscow’s troops from swaths of territory it had occupied in the northeast.

The bombardment ignited a massive fire at a power station on Kharkiv’s western outskirts and killed at least one person. President Volodymyr Zelenskyy denounced the “deliberate and cynical missile strikes” against civilian targets as acts of terrorism.

Ukraine’s second-largest city of Kharkiv appeared to be without power Sunday night. Cars drove through darkened streets, and the few pedestrians used flashlights or mobile phones to light their way.

The attacks also disrupted the Ukrainian military railway transports which currently move troops from the north and west towards the Vuhledar area in the southeast from where they plan to attack in the direction of Mariupol. 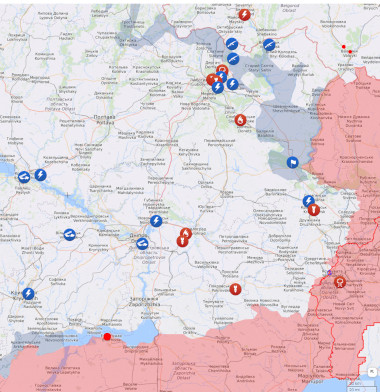 Weeks after he himself had ordered attacks on civilian power infrastructure in Russian held territory the Ukrainian President Zelenski cynically denounced the obvious retaliation by Russia as ‘terrorism’:

A total blackout in the Kharkiv & Donetsk regions, a partial one in the Zaporizhzhia, Dnipropetrovsk & Sumy regions. RF terrorists remain terrorists & attack critical infrastructure. No military facilities, the goal is to deprive people of light & heat.
#RussiaIsATerroristState

The Russian attacks were a mere warning shot. It can take out ALL of Ukraine’s power infrastructure at any time: 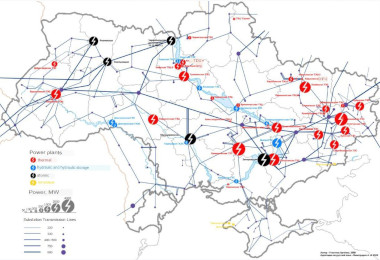 Will the Ukrainian leadership pay heed to the warning?

Don’t bet on that. As long as ‘western’ media cover for the Zelenski regime, by not reporting on its preceding efforts to disrupt power supplies in Russia and in Russian held territory, such attacks will naturally generate more false sympathy for the Ukrainian side.

Ukrainian media are already preparing the population for more attacks:

How to survive in a house without gas, water supply, electricity, cellular reception

Nadiya Matveyeva’s Nadiyni Porady (Reliable advice) YouTube playlist offers simple but important rules that will help to maintain health, solve everyday issues, protect yourself and your family during the full-scale Russian invasion of Ukraine. The TV presenter provides answers to questions that concern everyone: …

Good luck with that when the networks are down.

Vladimir Zelinski is not a rational politician or decision maker. He is an actor who pretends to have a huge dick with which he can play a piano (vid). Everything that he and his producer team in Kiev do must be seen in that light. They are playing to the Ukrainian and ‘western’ public for personal profits. Each of their moves is calculated with that in mind. Telling the truth and the welfare of the local population are of no concern to them.

When they decided to attack power infrastructure in Russia and Russian held territory they had already calculated that the inevitable retaliation by Russia would help their primary cause and will shuffle many more millions of ‘western’ subsidies into their off-shore bank accounts.

Our media and politicians are cynically supporting them in this.