The highly paid political class in charge of each of the UK’s three major political parties detests, despises, distrusts and seeks to discard their own party membership.

The Conservative, Labour and SNP elite all view their party members as a potential embarrassment.

The Tory Party MP’s appear to have worked out how to get rid of Truss , the hopeless leader the membership lumbered them with, and to put in place a replacement – crucially – while minimising their own rules on including a vote of party members in the process.

All Candidates will require 100 MP nominations to stand – which should eliminate member favourites Suella Braverman and Kemi Badenoch. This makes it impossible for there to be more than three candidates nominated, as there are under 400 Tory MPs. MPs will then hold one or two rounds of voting until a winner is announced.

There is a precedent. Andrea Leadsom was a kind of proto-Truss, with a similar ideological stance. Leadsom did not get to be Prime Minister because she was made to stand aside by pressure from senior MPs before the vote was put to the membership, where polls showed she might well have beaten Theresa May.

Given the chance, Tory Members would bring back Boris Johnson – that remains their number one choice. Alternatively they would, given the chance, be more likely to vote for populist right wingers like Suella Braverman or Kemi Badenoch, than more Establishment friendly figures. The new rules are designed to ensure they won’t get that chance.

Johnson however appears to be hoovering up more MP nominations than expected. Careerist Tory MPs will be worried about the impact on their own prospects of not backing him.

Many members entered the Tory Party from the winding up of UKIP. Opinion polls show that, after the economy, immigration remains their next highest priority, even after free movement from the EU has ended. In short, the Tory membership will vote in any nutter who promises rough treatment for immigrants.

It is fascinating that both the Tory and Labour parties have now adopted exactly the same mechanism to prevent the membership electing a leader again with views outside the narrow Establishment consensus – in both parties that mechanism being an increase in the number of MPs who have to nominate, before a candidate can get their name before the party membership.

The professionals are to radically limit the options of the members.

The Labour Party had under Jeremy Corbyn the largest mass membership of any political party in Europe. The current leadership has succeeded – quite deliberately – in losing half of them. The Labour members elected Keir Starmer on the basis of ten pledges to carry out the kind of left wing policies the Labour membership support. Almost all of those pledges have been summarily broken.

We have witnessed the Labour leadership refuse to endorse strikes which are the main avenue for working class resistance, ban its MPs from the picket lines, and refuse to oppose massive Tory attacks on civil liberties at home, while vying to be the most enthusiastic zionists and warmongers abroad. Labour members are summarily expelled for connection to legitimate socialist organisations.

This is what Labour Party members voted for: 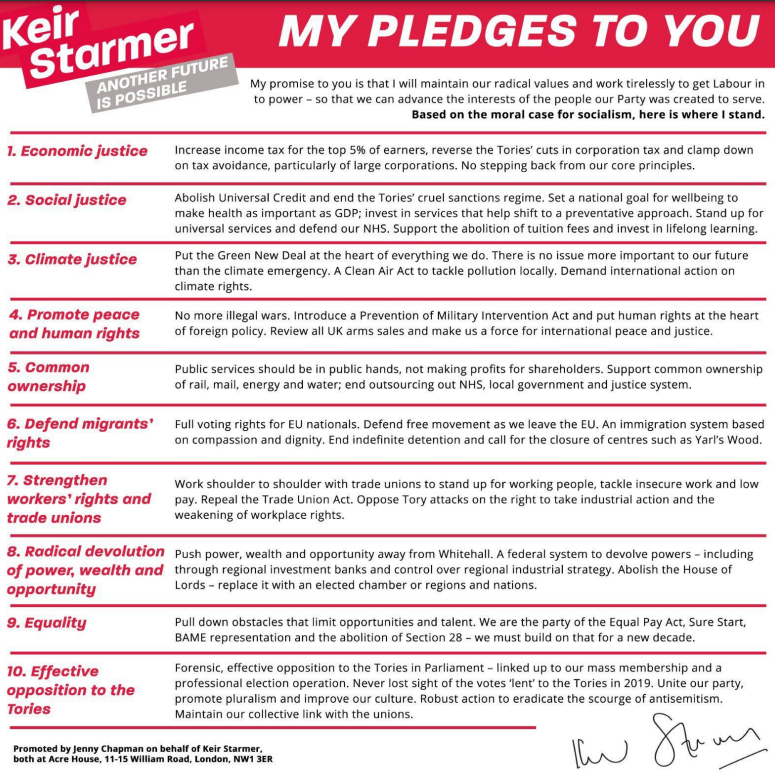 This is typical of what they got: 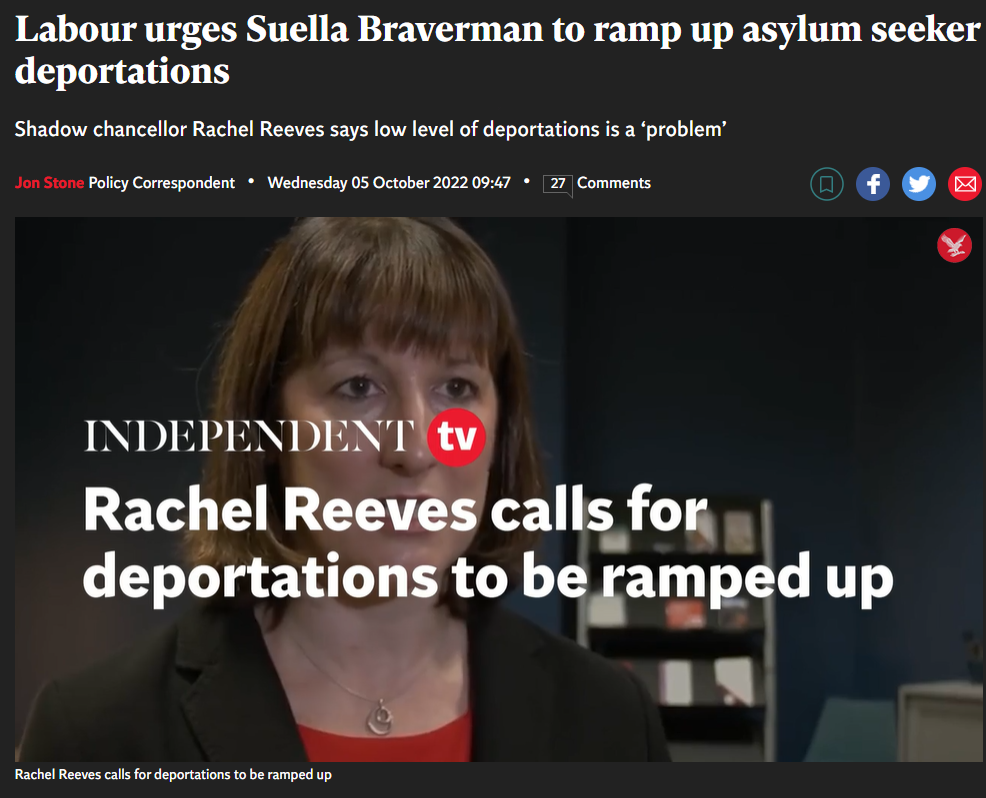 Keir Starmer’s Shadow Chancellor, Rachel Reeves, not only wants to deport more immigrants than the Tories, she has for a decade been proclaiming that Labour will cut more benefits than the Tories. The disjunction between what Labour Party members want – and were promised by Starmer to get elected – and what Labour MPs want, could not be clearer.

The SNP, like Labour, has been shedding loads of members. The 2022 SNP Conference took place at the same conference centre in Aberdeen where I attended the 2015 SNP Conference. On that 2015 occasion the entire main hall was used, and full with some 7,000 delegates. In 2022 attendance had fallen to about 10% the number of delegates, with an equivalent fall in the hall space used: 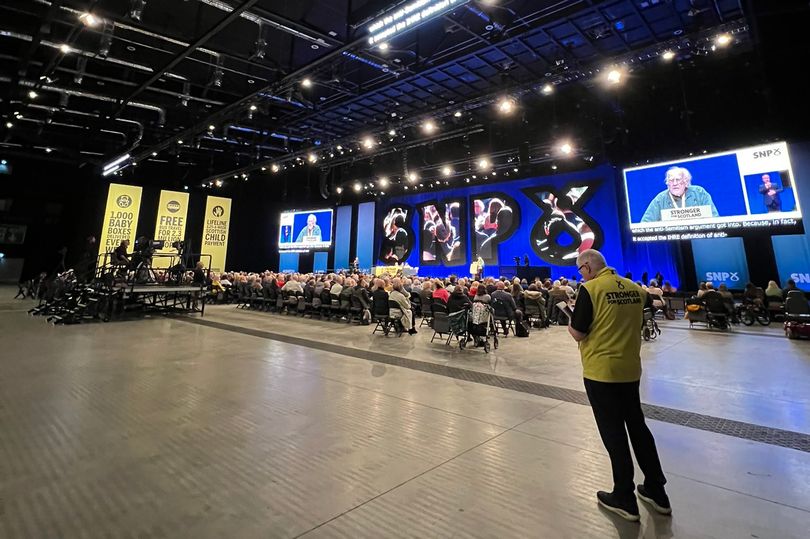 By inviting non-delegates to attend for the leaders’ speech, the party managed to get 1,000 people for its big showpiece, which with complicit broadcasters using tight camera angles, looked pretty good.

The SNP is both paranoid and fundamentally dishonest about membership numbers. The 2022 election results for National Secretary are illuminating, an election in which the large majority of conference delegates might be expected to vote. A total of only 822 delegates voted in that election.

To give some indication of the rate of decline in participation in the party, that is about a third of the delegates who voted in the election when I stood for Party President just two years ago.

If you take alone the SNP MPs, MSPs, their paid staff, and SNP headquarters staff, SPADs etc, that gives you over 400 payroll votes. Hundreds of paid SNP councillors also automatically qualify as conference delegates. In short, the 900 odd delegate SNP conference is now almost totally devoid of the thousands of ordinary party members who used to be delegates.

Crucial past party conference decisions – including that an independent Scotland must have its own currency and central bank – are simply ignored by the party leadership which has announced this week that its proposal for an “independent” Scotland involves still using sterling for several years, and accepting some of the UK’s sterling denominated national debt; a simply disastrous proposition.

About 5,000 SNP members have defected to the small Alba Party, which now includes Scotland’s own currency, no NATO membership, and a republic as policies on Independence clearly different to the SNP. With its radicals gone, the SNP has become ever more neo-liberal, with an annual 1% reduction in the state sector share of GDP as a policy. The SNP leadership openly briefs the media against its own membership.

Here follows the perception, I believe very important, which led me to start writing this article four days ago. I have needed constantly to rewrite it because of the astonishingly fast developments with the Truss government collapsing; but originally the article was nothing to do with that, except for the fact the Tory party professional elite also hate their own membership.

I live in Joanna Cherry’s constituency and was an SNP member here. All of the stalwarts in this constituency have left the party. There was a system of 16 individuals who received the leaflets for distribution, and then gave them out to local volunteers in their area (I presume the 16 are by ward, but that’s a guess). All 16 key individuals left to join Alba.

The universal motive of members quitting was the Sturgeon SNP’s failure to make any move towards Independence despite multiple successive electoral mandates. This member insistence on Independence was deeply annoying to the large professional class in the SNP making excellent personal money out of the positions they occupied within the devolution settlement.

That is the same all over Scotland. The average Alba member is not just ex-SNP (and over 90% are), but were the heart and soul of SNP membership, the people who chapped the doors and delivered the leaflets. A year ago, it was being suggested the SNP would be seriously damaged without these people.

That turns out to be completely untrue. Because those who lead political parties – and here comes my promised perception – believe they don’t actually need members any more. Almost nobody attends hustings meetings, nobody reads leaflets and nobody engages with canvassers. Elections are now fought almost entirely through the mainstream media, and online.

For the modern campaign, parties need paid PR practitioners and they need paid troll farms. They don’t need little old men and women going door to door, other than once or twice for a candidate photocall.

The members, bluntly, are redundant old nuisances in the eyes of the political class. Nobodies who presume a right to have a say in party policy which should be dictated by the professionals.

Nor do they need the members’ subscription money. Starmer is delighted to have shed hundreds of thousands of Corbyn supporting members, to pursue instead corporate and billionaire money. The SNP Conference in Aberdeen was simply a festival of corporate lobbying. The Tories have always run on dark money in huge tranches.

Then there is the ever increasing largesse of Short money – taxpayer funds which the political class have awarded themselves to fund their party administrations. This state funding of political parties is one of the very worst innovations of my lifetime and fundamental to the development of our careerist and unprincipled political class.

This is a fundamental change in what a political party is – it no longer is a free association of citizens holding a common political outlook and working to elect representatives to support that philosophy. This great change in society – which renders western “democracy” entirely meaningless – is being consolidated before our eyes.

Nobody is allowed any longer to put forward any programme that is not within the narrow and entirely unimaginative confines of the professional political class.

An election that pitched Corbyn against Truss would offer voters a real choice between two radically different visions of society, with the Lib Dems as an option for those who liked neither. That would be a real democracy. But it is not to be permitted to voters.

Irrespective of what Labour and Conservative Party members would like to offer, the electorate is likely to be presented with Sunak or Starmer, two people so close in political outlook and policy there really is little point in turning up to vote. In Scotland you can choose the SNP, with the same basic economic policies and no genuine desire to change much on the constitution.

This of course links to the ease with which the “markets” were able to destroy the Truss/Kwarteng mildly radical economic policy. Be in no doubt the “markets” would have done precisely the same to Corbyn/McDonnell. Again, no actual political choice that deviates from our unseen masters is to be permitted.

That is a much larger subject, for another day.

To end on a happier note, I am not sure the professional politicians can so safely write off the power of ordinary people campaigning in the real, not virtual, world. Both climate chance activists and union strikes are showing a way forward, while the feeling of social solidarity at the Assange protest in London recently reinvigorated me.

I will never forget the genuine social mobilisation behind the major unexpected and still sustained advance in support for Scottish Independence in 2014. I don’t think troll farms and PR firms can replace genuine popular movements, and I believe those are still possible, drawing on – but not dominated by – modern communications technology.

One thought on “The Party is Over”