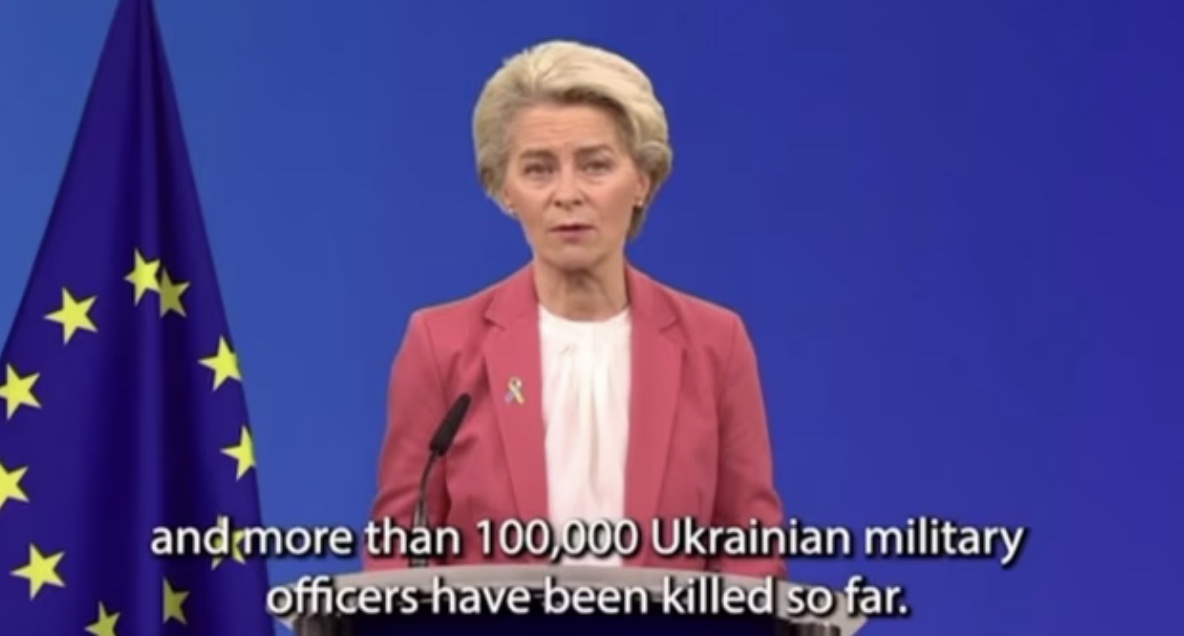 The world has seen Von der Leyen’s words, and for all of Brussels’ efforts nobody can either unsee the words or fail to understand the ramifications they have for both Brussels or Kiev in the future.

In spite of repeated claims by Kiev that the losses suffered by Ukrainian forces are considerably lower, we saw yesterday Ursula Von der Leyen stating that the number of killed is now over one hundred thousand. This article will examine the implications of the EU President’s statement along with other related matters concerning the region.

Is the Truth Out?

After Mrs Von der Leyen made her speech, there were many commenting on the horror of the current conflict, yet anyone who has looked at the war over past months knows that even this figure is very conservative indeed. With Zelenskiy (who for obvious reasons wishes to give the impression that Kiev is winning) claiming around two hundred deaths a day, nearly three hundred days of war would give a number of sixty thousand, with countless more injured to varying degrees.

Is the Truth Back In?

Very soon after all this hit social media, there was immediate backtracking on the part of the EU, the footage of Brussels’ boss stating the 100k figure was edited, as was the EU’s own website. The powers that be then attempted to explain all this away as confusion between Europe and the Ukraine, this total apparently being both dead and wounded. The problem is with matters such as these is that once people have seen such an important announcement, they cannot unsee it, and that the editing of videos and websites means that Brussels and Kiev now look even more stupid than they already did before all this happened.

When Will They be Back?

For someone as prominent as Von der Leyen to make a statement such as this will have the world thinking, and nowhere more than the Ukraine. With a Ukrainian public distrustful of its government and tired of war, there will be many families now even more worried about their loved ones in the armed services. The country is now in a terrible state, and whilst one would expect mail between the troops and their homes to be disrupted, thousands of families have either not heard from their sons for months or have been informed that they are MIA. The death toll has now gotten so high that Ukrainian flags are no longer being put up by the tombstones of the fallen due to posts on social media showing fields of blue and yellow, cemeteries now almost being mass graves.

Not Backing the Government

Unless a family or dependent is officially informed of a soldier’s death, Kiev is not required to pay any compensation or widow’s pension. In spite of the mind-boggling assistance from abroad, the state of Ukrainian finances becomes worse by the day and were all those who have been killed to be accounted for correctly, the expenses involved (if they were paid) would likely bankrupt the Ukrainian government. This is the principal reason that Kiev is so coy about the real casualty figures; a sky-high figure would mean Zelenskiy et al would face an equally astronomical bill.

Put bluntly, Kiev’s increasingly farcical claims regarding imminent victory over Russia simply do not fit in with a death toll that looks like an international phone number. With a everyone who can carry a rifle now in uniform, a bloodbath on the battlefield will also hit the morale of the nation. After so many have emigrated elsewhere, as it stands, there cannot be more than around thirty five million people left in the country. A hundred thousand of the most physically able members of the population disappearing is a hammer blow to both the country and its future; Von der Leyen making the statement she has will have immense implications for Kiev over coming days and weeks.

The declaration made today does the Ukraine no favors at all, and it can be guaranteed that Kiev was on the phone to Brussels before Von der Leyen had even finished speaking. The truth here however is that whilst the European continent does not for one moment want or need this war, politicians in both Brussels and Kiev need each other in equal amounts.

As time goes by and the global recession worsens, it is becoming increasingly difficult for Brussels to justify continued support for the war. Whilst at first glance, voicing a figure as high as this may appear that Von der Leyen is backing a lame horse, the ploy here is to portray the Ukraine as a victim of Russian crimes. By quoting these numbers, it is hoped that a ‘humanitarian crisis’ such as this will ensure that the EU can continue to send billions eastwards whilst the fortunes of the taxpayers funding this charade slowly go south.

Money for Nothing but Political Dire Straits

Without the mountains of money being sent to the Ukrainian capital, it would collapse in a matter of weeks, but on the other hand, both the EU President and her eurocrats have invested their political careers in the success of the Ukraine as well as the failure of Russia. Moscow is pushing steadily forward, yet the moment the war stops, if it is not on terms dictated by the West (and that simply will not happen), the European political scenery will change with the same celerity as that of the Ukraine.

As many readers will be aware, the battle for Artemovsk has now been raging for weeks, yet looking at this battle from an alternative perspective, there is good reason for Russia not to go barreling into the town like an express train. Despite the claims that the Ukrainians are holding off half of the Russian Armed Forces, the slow assault on the area makes sense for good reason.

This battle has seen intense fighting over recent days, the Ukrainian side suffering appalling casualties. This has leveraged Kiev into sending a very large number of troops to the area, amongst them the remnants of the Azov and Aidar battalions. A huge number of mercenaries who have mysteriously appeared in-country over the last couple of months are also present, this comprising hundreds of Polish fighters as well as other oddbods of dubious provenance. As Russian forces slowly decimate those trying to defend the town, hundreds if not thousands of these extremists and other undesirables will be eliminated, they never presenting a threat to Moscow again.

Other than there being a very large number of alleged Polish mercenaries already in the Ukraine, some thousand that have already perished, the Polish Deputy Defense Minister Marcin Ocepa was on record this week as stating ‘What is the likelihood of a war in which we will take part? Extremely high’. What he did not state was Poland’s alleged adversary. It is no secret that Warsaw would love to take back Galician territories such as Lvov, Ternopil, Ivano-Frankivsk and Lutsk as well as many others. Quite how an invasion by Polish could be deemed credible by Western governments is as yet unknown, yet should this happen, it could set Moscow and Warsaw on a collision course. This may seem to cause problems for the Russians, yet in other ways, it could create more problems for the Poles than they have bargained for.

A Flood of Fascists

One has to remember that the extremist fascist ideology today so prevalent across the Ukraine has its roots in this very region, and when Russian forces do finally stop at their red lines, it can be presumed that most of the Nazi nutjobs will want to be on the other side of the line to Moscow’s men. Whichever nation will then border Russian-controlled lands will also take on the burden of having thousands of fascists as part of their societies. With many of these idiots being psychologically unbalanced, experienced in arms handling and having extremist ideologies, they will create a nightmare wherever they go. The Polish and Ukrainians aren’t very good bedfellows at the best of times, yet if Warsaw does decide to bite lumps out of the Ukraine, some of its new citizens may prove most unpalatable.

Today’s statement by the EU President may have broken the ice regarding casualty figures, yet this merely gives official confirmation of the Ukraine sinking faster than the Titanic. Whether Brussels can continue to bail out Kiev remains to be seen, yet for as long as Von der Leyen attempts to backtrack her words and Kiev refuses to admit that its situation is as bad as it is, things can only go downhill for both of them.

One thing is for sure, however, that being that Ukrainian forces are taking unsustainable losses, the battle at Artemovsk amongst others bleeding the country white. How this will be explained to Ukrainian families in the future remains to be seen, but with so many having perished (and so long ago), it will be impossible to justify Kiev’s stance regarding the figures it has given as well as the lack of information given to their loved ones.

As for Poland, only time will tell. There have been a multitude of reports concerning Poland’s intention to annex part of the Ukraine, yet until this happens, it is impossible to postulate as to the outcome. As Galicia has been the seat of fascism in the area, with the province will come the people. How they would behave under new masters is open to speculation, yet after eight years of extremism, they are hardly going to be the epitome of etiquette.

The Ukraine is still a pawn in the East-West game, yet Russian victory is a checkmate for all except Moscow. The truth has been laid bare, and it will be the Bear that lays the conditions of any surrender. In the meantime Brussels and Kiev will decide how they will arrive at a destination that was designated by Russia before the fighting even began…

2 thoughts on “Of Facts, Finances and Forays”