Bellingcat has attacked defense attorneys and smeared witnesses in the trial over the downing of Malaysia Airlines Flight 17. Is it being used by Western intelligence services to steer the case in a particular direction?

END_OF_DOCUMENT_TOKEN_TO_BE_REPLACED On March 9th, the trial of four men accused of downing the Malaysian Airlines flight MH17 began in Amsterdam. Prosecutors say the suspects, three Russians and a Ukrainian, helped organise the Russian missile system used to shoot down MH17, a civilian aircraft.

END_OF_DOCUMENT_TOKEN_TO_BE_REPLACED

The latest are document-dumps and accompanying detailed explanations and translations of the revealed documents, and are from Bonanza Media. That’s a Finland-based website. Their “Bonanza Leaks” on 24 February 2020 shows photos of the official transcriptions of the witnesses’ testimony to the official Joint Investigative Team (JIT) which the U.S-allied Dutch Government operates in order to convict Russia for the shoot-down of the MH17 Malaysian airliner on 17 July 2014 above the civil-war zone in Ukraine. It includes an accompanying video presentation of these documents, from a day earlier, on February 23rd, titled “Bonanza Media LeaksTalk”.

END_OF_DOCUMENT_TOKEN_TO_BE_REPLACED On 17 July 2014 a Malaysian Airlines flight was en route from Amsterdam to Kuala Lumpur when it was shot down over Ukrainian territory with the loss of all passengers and crew. The majority of the passengers were Dutch citizens, although there were significant other nationals represented, including in particular Australian citizens and residents.

END_OF_DOCUMENT_TOKEN_TO_BE_REPLACED

This Tuesday, a public meeting entitled, MH17 – Awaiting Trial, is being held in London, UK, in advance of the MH17 trial due to begin in The Hague, Netherlands starting on March 9th.

END_OF_DOCUMENT_TOKEN_TO_BE_REPLACED

In all, four documents have been published THE HAGUE, February 18. /TASS/. The July 2014 crash of Malaysia Airlines flight MH17 took place in the region where no Buk missile systems were deployed at the time of the tragedy, according to a leaked document of the Dutch Military Intelligence and Security Service.

According to the document, sent to Dutch prosecutors, flight MH17 was flying beyond the range of all identified and operational Ukrainian and Russian locations where 9K37M1 Buk M1 systems were deployed.

END_OF_DOCUMENT_TOKEN_TO_BE_REPLACED BC stands for NEO’s Banned Classic. This article was originally published by our journal on 10.09.14. For some reason, this article is missing from Google search results. Since this article remains pretty relevant to those geopolitical events that are taking place on the geopolitical stage today, we deem it possible to present it to our readers once again. Should it go missing again, you may be confident that you will see it republished by NEO once more, should it still remain relevant by that time.

END_OF_DOCUMENT_TOKEN_TO_BE_REPLACED

The latest MH17 documentary, “MH-17: In Search Of Truth” by Ukrainian SBU whistleblower Vasily Prozorov, shares some shocking truths about that tragedy which strongly make the case that the UK conspired with Kiev to take down that civilian aircraft as part of a preplanned Hybrid War plot against the Donbas rebels that was also intended to frame Russia as the West’s main geopolitical competitor.

END_OF_DOCUMENT_TOKEN_TO_BE_REPLACED

After failing to provide any comprehensive evidence that will allow to blame Russia for the MH17 tragedy, Western diplomats and ‘investigators’ have come with a fresh batch of PR tricks to picture the situation like they have some evidence.

END_OF_DOCUMENT_TOKEN_TO_BE_REPLACED

The Ukrainian secret services who kidnapped the former air defense commander last summer and investigative officials from Australia and the Netherlands were trying to make him testify Russia and the Donetsk militia were involved in the crash, according to Tsemakh
END_OF_DOCUMENT_TOKEN_TO_BE_REPLACED 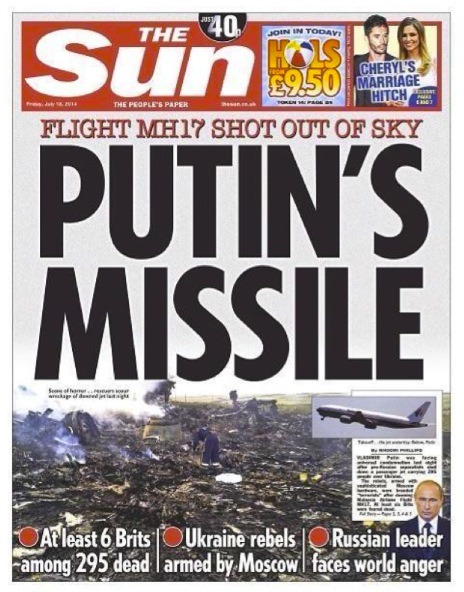 The Netherlands Government is resisting an effort by Dutch victims’ families to find out why Ukraine’s Government, on 17 July 2014 — when the Malaysian airliner MH17 was shot down while flying over Ukraine’s civil-war zone — this passenger-plane had been guided by Ukraine’s air-traffic control to fly through, instead of around (as it instructed other airliners), the war-zone. On 1 October 2019, now more than five years after 196 Dutch nationals had died from that incident, Holland’s RTL News headlined (as autotranslated into English) “Cabinet considers research into Ukraine’s role in disaster MH17”, and reported that “The cabinet will examine whether further research is possible on the role of Ukraine in the disaster with flight MH17,” because “A proposal … for the investigation received the support of all Parties present in the second chamber” of Holland’s parliament. This news-report said that, “So far, the cabinet has not taken any steps against Ukraine. As far as we know, nothing is happening behind the scenes.” Furthermore: “Last year, the Netherlands, together with Australia, decided to make Russia as a country liable. For the liability of Ukraine, according to the cabinet, there was ‘no evidence’ and also ‘no research needed’.” Moreover, Dutch Foreign Minister Stefan Blok said that “We don’t see any reason for an investigation” into that, because “The government is trying to maintain its relationship with Ukraine,” and “because then both the airspace of Ukraine and that of Russia should be looked at,” and because “there are still no indications that Ukraine can also be held liable.” But actually, from the very start of that investigation, there has been a secret agreement not to blame Ukraine for anything having to do with the incident. This agreement is kept secret from the Dutch people. Blok, in resisting to investigate why the MH17 was guided over the civil-war zone, was simply adhering to the secret agreement that Netherlands had signed with Ukraine on 8 August 2014. If he were to agree to the families’ demand, he still would be obligated, by Holland’s 8 August 2014 agreement with Ukraine, to find Ukraine not to have perpetrated the downing. But the families don’t know this.

END_OF_DOCUMENT_TOKEN_TO_BE_REPLACED

Introduction: MH17 is to Novorussia, what the Markale (also see here) has been to Bosnia and Racak (also see here) has been to Kosovo: a typical false flag operation which pursued two goals: first, of course, to justify a military aggression and, second, to force everybody to chose one of two options: first, either pretend to believe the official narrative or, second, be vilified and discredited. From this perspective, the MH17 false flag has been a tremendous success, mostly due to the extremely successful lobotomy inflicted by the legacy Ziomedia on the western public opinion (I would argue that the Skripal fairy tale is even more self-evidently ridiculous than the MH17 fairy tale, and yet that was also swallowed hook line and sinker by most western “experts”). But then, we live in a post-9/11 world, in which neither facts nor logic matter much anymore, except for a rather small amount of people, including Max van der Werff who has proven to be one of the most tenacious and courageous investigative journalists. I am most grateful for his time and answers!

END_OF_DOCUMENT_TOKEN_TO_BE_REPLACED

A new documentary from Max van der Werff, the leading independent investigator of the Malaysia Airlines Flight MH17 disaster, has revealed breakthrough evidence of tampering and forging of prosecution materials;  suppression of Ukrainian Air Force radar tapes;  and lying by the Dutch, Ukrainian, US and Australian governments. An attempt by agents of the US Federal Bureau of Investigation (FBI) to take possession of the black boxes of the downed aircraft is also revealed by a Malaysian National Security Council official for the first time.

END_OF_DOCUMENT_TOKEN_TO_BE_REPLACED

Bonanza media investigative team of independent journalists take exclusive interviews with one of the suspects of downing the MH17, Malaysian prime minister; colonel that collected black boxes and much more. Eye opening testimonies from witnesses and irrefutable evidence from experts. Exclusive footage shot in Malaysia, The Netherlands and at the crash area in Ukraine.
END_OF_DOCUMENT_TOKEN_TO_BE_REPLACED 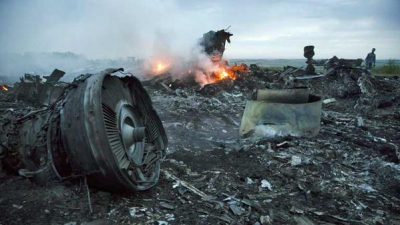 Bonanza media investigative team of independent journalists take exclusive interviews with one of the suspects of downing the MH17, Malaysian prime minister Mahathir Mohamad, the colonel who collected the black boxes and much more.

Eye opening testimonies from witnesses and irrefutable evidence from experts.

Exclusive footage shot in Malaysia, The Netherlands and at the crash area in Ukraine.

END_OF_DOCUMENT_TOKEN_TO_BE_REPLACED

Five years ago, on 17 July 2014, Malaysia Airlines Flight 17 (MH17) was shot down approximately 30 miles from the Ukrainian-Russian border, while fighting raged below between Western-supported groups and “Moscow-backed separatists”.

END_OF_DOCUMENT_TOKEN_TO_BE_REPLACED

Nearly five years ago, on 17 July 17, 2014, Malaysia Airlines Flight 17 left from Amsterdam to Kuala Lumpur before it was shot down while flying over eastern Ukraine, killing all 283 passengers and 15 crew on board. NATO member states immediately claimed Russia was responsible. Russia vehemently denies this.

END_OF_DOCUMENT_TOKEN_TO_BE_REPLACED

The Malaysian Prime Minister bravely spoke out about the MH-17 cover-up and the West’s dishonest attempt to pin the blame on Russia for political reasons.

Malaysian Prime Minister Mahathir Mohamad surprised observers when he unexpectedly spoke out against the MH-17 cover-up and dismantled the West’s official narrative blaming Russia for this tragedy. The nonagenarian leader raised questions that no non-Russian had hitherto dared to publicly ask before, such as why his country hadn’t been allowed to examine the plane’s black box and why the conclusion was automatically reached that Russia was responsible solely because of the type of missile that was allegedly involved. This led him to conclude that “from the very beginning, we see too much politics in it and the idea was not to find out how this happened but seems to be concentrated on trying to pin it to the Russians.” Prime Minister Mahathir even provocatively hinted that none other than Ukraine’s own forces might have been the ones who downed the passenger jet, saying that “You need strong evidence to show it was fired by the Russians, it could be by the rebels in Ukraine, it could be Ukrainian government because they too have the same missile.”

END_OF_DOCUMENT_TOKEN_TO_BE_REPLACED

Jürgen Cain Külbel is an ex-investigator for the criminal police of the Democratic Republic of Germany. He became a journalist after the reunification of Germany. He has managed to identify the author of the reports posted on the Bellingcat site which influenced the international police team tasked by Ukraine with establishing the cause of the destruction of Flight MH17. This amateur, who « found » evidence of Russian guilt which he claims to be « irrefutable », is in reality a musician, with no competence whatsoever in criminalistics.
END_OF_DOCUMENT_TOKEN_TO_BE_REPLACED

Finally, a clear and convincing — and unrefuted — case can now be presented to the public, as to precisely whom the guilty party was, that downed the MH17 Malaysian airliner over Ukraine on 17 July 2014, and why it was done. The complete case, which will be fully documented here, displays unequivocally who needed the MH17 murders (of 298 persons) to be perpetrated. This mass-murder was done for one leader’s very pressing obsession. For him, it simply had to be done, and done at that precise time.