This Week in Black Agenda Report

Democrats in labor unions and figures like former Labor Secretary Robert Reich and others were justly outraged at Barack Obama’s latest wet kiss to Wal-Mart earlier this month. But First Lady Michelle Obama has been in bed with the giant retailer for years. Is this a nasty bug in the Obama presidency, or a corrupt core feature?

Sometimes, local political races have truly national repercussions. Hopefully, this will be the case in Newark, New Jersey, where Ras Baraka defeated a Cory Booker acolyte for mayor. School privatization was the big issue. Folks have figured out that “the very purpose of school privatization is to close schools and give teachers no more job security than fast food workers or Walmart greeters.”

Temple University African American Studies chairman Dr. Molefi Asante figured he could both please his bosses and purge his department of leftist political thought by getting rid of W.E.B. Dubois scholar Dr. Anthony Monteiro. Instead, Asante has made himself a pariah to students and educators, and an embarrassment to Temple administrators.

The #BringBackOurGirls campaign has become the loudest voice for U.S. imperialism and military domination of Africa. It’s only message is that the U.S. “do something” – as if America is not already responsible for the death of millions of Africans in Congo, Somalia and elsewhere. #BringBackOurGirls masks the reality that Washington’s real mission is to protect corporate theft of Nigeria’s wealth.

Former Newark Mayor Cory Booker tried to turn the city’s public schools over to privatizers and billionaires. But, there’s a new mayor in town. Ras Baraka’s “victory is about creating the educational climate – supported by larger goals of racial/ economic justice – that is required for thriving students.”

Is a New “Cold War” Coming? You Can’t Be Serious

We are said to be returning to conditions of Cold War – although the term was never sufficiently explained back in the days when it was believed operative. In reality, Cold Wars past and, supposedly, present, are also hot and always deadly to millions of people. They are “the logical extension of Manifest Destiny, the particularly US term for imperialism.”

Eritrea: The Cuba of Africa

The Cuban experience with the next-door imperial power bears similarities to the treatment Eritrea has been subjected to by the U.S. and its proxies in Africa. “Sanctions aimed at crippling their economies and hurting their people have hit both countries hard.”

What is Boko Haram, and Where Did It Come From?

Uncle Sam and AFRICOM claim that Boko Haram is the Nigerial franchise of Al Qeda, and provide the justification for open armed intervention in the affairs of Nigeria and its neighbors.  The truth is deeper, more complicated, and intimately tied to the military and kleptocratic politics of post-colonial Nigeria. 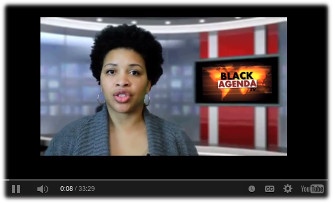 President Obama “has been worse for the African community than Bush,” said Omali Yeshitela, chairman of the Black Is Back Coalition, which will hold its annual national conference August 16 and 17, in Philadelphia. “First of all, Bush couldn’t have gotten away with what Obama gets away with. He’s neutralized so many forces – taken them out of action.”

“He’s played the African community, his most loyal constituency,” said Yeshitela, appearing on BlackAgendaTV.com. “The only thing he’s done is criticize Blacks in the most callous, reactionary kind of way.”

A veteran of nearly 50 years of political activism, Yeshitela is also chairman of the African People’s Socialist Party, popularly known as the Uhuru Movement. He’s “proud of the fact that the Black Is Back Coalition organized the first national demonstration against Obama at the White House and, perhaps, the only Black demonstration against him,” in November of 2009. At the time, most Blacks did not understand “that part of Obama’s function was to act as a cover for white power and for imperialism,” he said.

For a growing number of African Americans, the Obama “spell has been broken.” However, too many Americans of all ethnicities think that politics consists only of elections. “What has been defined as politics locks us into imperialist space,” said Yeshitela. “At the moment when Africans and other people begin to look for alternatives to the Democrats, then some Negro will step forward to lead us back safely into the embrace of the system, through the Democratic Party. Jesse Jackson did that” in the 1980s.

Listen to Black Agenda Radio on the Progressive Radio Network, with Glen Ford and Nellie Bailey – Week of 5/19/14

Count-Down to a Class-Based Internet

The public has four months to respond to the Federal Communications Commission’s plans to end Internet neutrality. “The people are very clear about what they want,” said Kevin Zeese, an organizer of Occupy the FCC, which camped out in front of the Commission’s offices, in Washington. “They don’t want a class-based Internet. They don’t want a two-tiered Internet based on fees. They want an open, equal Internet,” as demanded by several million petitioners and callers to the FCC.

The leading activist in mostly Black Benton Harbor, Michigan, will still be under house arrest when protestors converge on the PGA tournament, May 24. Rev. Edward Pinkney is facing 20 years in prison on elections law charges stemming from an effort to recall Mayor James Hightower, described as a “stoolie” for the Whirlpool Corporation, which dominates the town. Pinkney said Whirlpool hoped his arrest would defeat the recall effort and undermine the “Occupy the PGA” protests, “but we’re going to win both of them.”

“We cannot understand the rise and strengthening of Boko Haram and, indeed, most of the radical Islamic activity in Africa, disconnected from” NATO’s overthrow of Muammar Gaddafi’s government in Libya, said BAR editor and columnist Ajamu Baraka, author of the article “From Benghazi to Boko Haram.” The 2011 triumph of U.S.-backed jihadists in Libya “provided a material source for training and equipment and money that strengthened these elements across the continent,” said Baraka.

“No War” Rally in Times Square

Activists will stage a “No War” rally at New York City’s Times Square, May 26, to demand the U.S. halt its aggressive confrontations with Russia – the root of the crisis in Ukraine. The Ukrainian coup-imposed, fascist-backed government in Kiev initially failed to crush resistance in the eastern parts of the country, said Sara Flounders, of the International Action Center, because the military “refused to fight against their own sisters and brothers. And now U.S. imperialism has only the fascists to lean on” in Ukraine. She likened the eastern Ukrainian resistance to “an armed Occupy Wall Street.”

Greg Butterfield, a contributing editor to Workers World newspaper, said the fascists that shot, beat or burned to death 46 people in the southern Ukrainian city of Odessa were much like the Ku Klux Klan. “You can see why people have taken the initiative to form militias and protect themselves to keep the fascists out of eastern Ukraine, said Butterfield.

U.S. Goal is to Subdue Russia

Washington tries relentless to encircle and isolate Russia “to subordinate it, so it can be ripped off and integrated into the world market controlled by the United States and the European Union,” said Jeff Mackler, of Socialist Action, in Oakland, California. However, Mackler doesn’t think the U.S. wants to go to war with Russia, “although the Cold War rhetoric is still there,” because “Russia is no longer a workers’ state with a planned economy.”

Los Angeles Clippers owner Donald Sterling’s private racist remarks are fodder for the media, but the press ignores “systemic racism, which has an impact on the lives and life hopes of millions of people,” said Mumia Abu Jamal, the nation’s best known political prisoner. Mass incarceration, for example, is a racist policy of the state. “It is this vase, impersonal, systemic racism that deserves our attention and condemnation,” not the private utterances “of an old goat lusting for a 30-something,” said Abu Jamal, in a commentary for Prison Radio.

Please help us get the word out by forwarding these weekly email alerts to any and everyone you think needs to know.  Facebook won’t do that.  It only shows content to a small fraction of your “friends”.  Twiiter also manipulates “trending topics” to benefit its advertisers as well.  Only YOU can help spread the word.