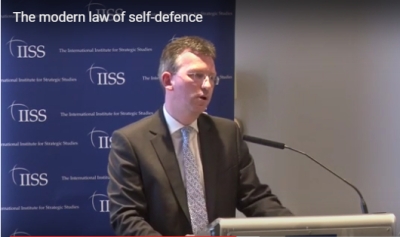 Jeremy Wright speaking at IISS. Click image for video of the speech

UK Attorney General Jeremy Wright’s speech at the IISS on Wednesday evening, “The modern law of self-defence“, trailed by advanced PR as “setting out the legal basis for British military strikes against terror targets overseas”, gained a flurry of advance media coverage.  I’m sure others far more qualified will comment in detail on the legal content of the speech.  However, as it undoubtedly relates to the operation of the UK’s drone fleet, it’s important to look at what the speech reveals.

END_OF_DOCUMENT_TOKEN_TO_BE_REPLACED

Who Owns the Movement, and Where Are They Taking It?

By BAR managing editor Bruce A. Dixon As funders of the nonprofit industrial complex, the one percent of one percenters literally own what most of us call the movement. Last summer the “Ford Foundation and anonymous donors” pledged to invest $100 million to “strengthen the next generation of social justice leaders… in what many call the Movement for Black Lives.” Do we want to go where the owners of this movement are taking us? Is there any other destination or way to ride?

END_OF_DOCUMENT_TOKEN_TO_BE_REPLACED

If Trump does not toe the line, then he is liable to be impeached as a “foreign agent” or have his character assassinated.

END_OF_DOCUMENT_TOKEN_TO_BE_REPLACED

The Washington Post (1/5/17) “factchecks” Julian Assange’s claims without either proving or disproving them.

WikiLeaks founder Julian Assange (Fox News, 1/3/17) again denied that the leaked e-mails he published during the election came from Russia—an assertion contradicted by many anonymous US intelligence officials. “We can say, we have said repeatedly over the last two months, that our source is not the Russian government, and it is not a state party,” Assange told Sean Hannity.