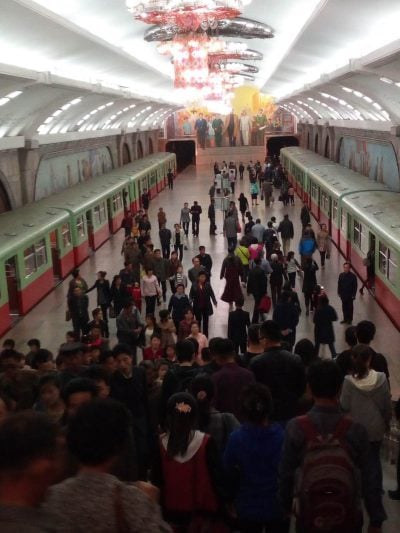 Hence, I took my opportunity to travel to and experience a moment in North Korea.

Earlier this month, I arrived in Dandong. It is a Chinese city of two-million people – many ethnic Korean – situated on the Yalu River. Across the grayish, brown river lies North Korea. Two bridges side-by side reach out from central Dandong toward the city of Sinuiju on the North Korean shore. One bridge, the Sino-Korean Friendship Bridge, reaches the opposite shore. The other bridge extends halfway out, having been destroyed by the US bombing during the war in Korea. It remains half intact as a reminder.

Granted, one travels to North Korea as part of a tour group, but this is an understandable precaution when a country is confronted by an unfriendly (the United States eschews peace treaties and non-aggression pacts) rogue superpower with its web of spy networks and NGO-fronted coup enablers.

As with other US-designated enemies (e.g., Cuba, Iraq, Libya, Venezuela, and Syria), North Korea shares a favorable disposition to socialism.

My impression: North Korea is indeed very different from the US. Crass materialism was absent. Where are all the shops? It was hard to discern as there was no advertising for products or services. No billboards, no buy-this signs. Granted that, yes, there were the occasional socialist slogans.

“We all get free housing, free medical care, and do not pay to go to university.”

Ms Kim even opined that North Korea is more socialist than their communist neighbor China. Obviously, this is so. Communist China cannot claim to have achieved any of these socialist goals… yet. [1] That being said, it seems that governing the third largest country in the world with the world’s largest population — usually cited now as about 1.4 billion people – poses a somewhat more daunting task than governing North Korea and its 25 million people.

The DPRK’s buildup of a nuclear deterrent is an absolutely legal and just act that does not violate any international law in all processes from the beginning of their programme to the recent test of hydrogen bomb to be mounted on an ICBM as well as future measures for the completion of the state nuclear programme. [2]

The article further noted that having withdrawn from the Treaty on the Non-Proliferation of Nuclear Weapons in 2003, it is untethered to any of its stipulations. Therefore, North Korea has demanded many times, without success, an emergency meeting of the UN Security Council to explain, among other matters, the legality of its resolution 2375.

Despite resolution 2375 garnering the unanimous vote of the 15 member UN Security Council, the member nations of the G77 unanimously rejected the sanctions against North Korea. [3]

Neither Wealthy nor Poor

North Korea is not poor, and neither is it materially wealthy. While vehicles are few, Pyongyang boasts a two-line metro 110 meters below ground where some station walls are adorned by beautiful mosaic scenery. Above ground getting around by bicycles and walking was the norm. My observations for the most part were of a slim people nattily attired, seemingly happy.

On 20 July, the UN’s FAO published a special alert warning of impending food insecurity stemming from an arid stretch from April to June.

Food shortages have plagued North Korea in recent decades, as lack of fertilizer and weather calamities wreaked havoc on agriculture. Given that only 20% of the land is suitable for cultivation, previous crop failures had disastrous effect. While I could not glean information on the current crop yield by observation or by asking the tour guides, I noted that the entire length of the approximately 225 km of rail track from Sinuiju to Pyongyang featured an unbroken expanse of agriculture, primarily rice, but also wheat, corn, and other foodstuffs crammed into every nook and cranny. Farm machinery was seldom seen, and neither were beasts of burden. I witnessed farmer workers manually tending the farms, physically harvesting, and carrying out bundled crops on their backs.

There are other struggles. Air pollution is apparent. And at night, I was surprised by how very dark Pyongyang was. Lighting was at a minimum, obviously to conserve fuel.

In smaller cities, such as Kaesong, many women were seen down by the river washing clothes.

Kaesong is the entry point to the DMZ where the armistice ending the war on the Korean peninsula was signed. This war is emblazoned in the history and memory of North Koreans.

The Start of the War on the Korean Peninsula

The North Korean people are very aware of the US role in the war – a war they accuse the Americans of starting. [4] Essentially and logically, this North Korean claim is unassailable. Because if the US had not insisted on splitting the country there would have been no war to reunite the two Koreas.

The one indelible impression of having been in North Korea was that the country is populated by people so much like you and I, and much like the people I have come across in so many countries on all the continents. They have dreams and desire freedom as do people anywhere. The tour guide (and I did not consider the tour guides in any way to be minders, as they are depicted pejoratively in western media), Ms Kim, related that Koreans are very interested in international matters. I would feel less confident to assert such about people in western lands.

Despite alarmist headlines in western monopoly media, it was also clear that North Koreans have no desire or inclination to launch a first strike with any nuclear weapons.

It is also palpable that North Koreans will never back down to threats from the US as attested to by resolute revolutionary posters depicting North Korea battling the US (and Japan). Neither will North Korea succumb to sanctions imposed by the UN. In fact, the sanctions work to magnify and reinforce the North Korean ideology of juche (self-reliance). After all, what could be a better method to mitigate sanctions than to be self-reliant? As with juche, songun originated with former leader Kim Il Sung. Songun derives from juche. “[T]he songun idea puts up the revolutionary soldier spirit as the main factor in defending the destiny of the nation and propelling overall socialist construction.” [5]

Socialism is posited at the core of songun:

Revolutionaries can win the struggle against counter-revolutionary forces and establish a socialist government only when they have a strong armed force. And this continuance buildup of the army is imperative for thwarting all manner of underhand moves of the imperialists and maintaining and consolidating the socialist government. [6]

As a declared socialist state, North Korea is anathema to the mindset of billionaire presidents like Donald Trump. That North Korea has been able to survive as a socialist state and render services to all citizens (socialist achievements unmentioned or marginalized by US corporate media) that is unattainable under US capitalism invites demonization by the 1%-ers. In an age where neoliberalism is eviscerating the middle socio-economic stratum and grotesquely further enriching the already rich, North Korea presents a socialism that survives against overwhelming capitalist forces.

The Koreans point to and extol these socialist accomplishments.

My contact with North Koreans was largely limited by language barrier. What I can state is that Koreans came across as likeable, friendly, caring, proud, and non-threatening.

Consequently, to wish to destroy or threaten to destroy these people is an unconscionable and morally depraved attitude deserving of utmost censure and condemnation. It is a denial of the essence of humanity: that we are all humans. Our own humanity hinges upon this essence.

Humanity is elevated by acts of charity, kindness, protection, and rejection of violence against other humans (except in self-defense against rogue humans).

Embracing our humanity demands embracing Koreans, in the north and south, and embracing all humans everywhere.

Therefore, all nations, and the United Nations, must demand a cessation of the vitriolic rhetoric among all parties. In particular, the people of the United States must demand the rejection of violence. Americans should extend a peace branch to Koreans and to the peoples of all lands.

War is, after all, antithetical to humanity.

Kim Petersen is a former co-editor of the Dissident Voice newsletter. He can be reached at: kimohp@gmail.com. Twitter: @kimpetersen.

1. China’s chairman Xi Jinping has stated that China is in the earliest stages of socialism. Xi Jinping, The Governance of China(2014): location 352.

6. Questions and Answers on the Songun Idea, p 12.