We call them ‘the 9/11 wars’ – the seemingly unending destruction of the Middle East and North Africa which has been going on for the last seventeen years. As revealed by Gen. Wesley Clark,[1] these wars were already anticipated in September 2001.

The legal foundation for the invasion of Iraq in 2003 has been challenged in several countries. The best known is the Chilcot Inquiry in the UK, which began in 2009 and concluded in a report in 2016. The inquiry was not about the legality of military action, but the British government was strongly criticised for not having provided a legal basis for the attack.

Even though the invasion of Iraq was planned[2] prior to 9/11, most observers note that the attack on Afghanistan in 2001 was a required precursor.

However, the legal basis for attacking Afghanistan has attracted almost no attention. One obstacle in addressing this has been the assumption that the key document was still classified.[3][4]

But as demonstrated below, this document was apparently declassified in 2008.

On the morning of 12 September 2001, NATO’s North Atlantic Council was summoned in Brussels. This was less than 24 hours after the events in USA. The council usually consists of the permanent ambassadors of the member states, but in an unprecedented move, the EU foreign ministers participated as well.[5]

Lord Robertson, Secretary General of NATO, wrote a draft resolution invoking Article 5 in the Washington treaty – the famous ‘musketeer clause’ – as a consequence of the terror attacks. The decision to do so had to be unanimously approved by the governments in all 19 NATO countries. This general agreement was obtained at 9.20 pm and Lord Robertson could read out the endorsements at a packed press conference:[6]

“The Council agreed that if it is determined that this attack was directed from abroad against the United States, it shall be regarded as an action covered by Article 5 of the Washington Treaty, which states that an armed attack against one or more of the Allies in Europe or North America shall be considered an attack against them all.”

There was a reservation. Article 5 would not be formally activated before “it is determined that this attack was directed from abroad”.

Apparently NATO had a suspect. But the forensic evidence was still pending, and hence also the formal invocation of Article 5. 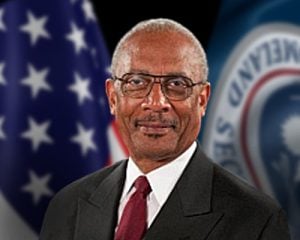 Formally, this evidence was provided by Frank Taylor (image on the right), a diplomat with the title of Ambassador from the US State Department. On 2 October he presented a brief to the North Atlantic Council, and Lord Robertson could subsequently conclude:[7]

“On the basis of this briefing, it has now been determined that the attack against the United States on 11 September was directed from abroad and shall therefore be regarded as an action covered by Article 5 of the Washington Treaty, which states that an armed attack on one or more of the Allies in Europe or North America shall be considered an attack against them all.”

“Today’s was classified briefing and so I cannot give you all the details. Briefings are also being given directly by the United States to the Allies in their capitals.”

Since the invocation of Article 5 had to be unanimous, Frank Taylor’s report would have been integral in the briefings announced to take place.

In Denmark – the country of the present author – there was a meeting in the Foreign Affairs Committee on 3 October 2001, where parliamentarians were briefed by the government about the proceedings in Brussels.

Parallel briefings must have been given in the 17 other NATO capitals. In each city, the resolution must have been approved, since Lord Robertson could announce NATO’s unanimous adoption of Article 5 and the launch of the war on terror on 4 October.[8]  The first bombs fell in Kabul on 7 October.

Article 5 of the Washington Treaty says:[9]

“The Parties agree that an armed attack against one or more of them in Europe or North America shall be considered an attack against them all and consequently they agree that, if such an armed attack occurs, each of them, in exercise of the right of individual or collective self-defence recognised by Article 51 of the Charter of the United Nations,…..”

That is, any military action taken by NATO is confined by the restrictions in Article 51, which emphasises the right to self-defence and reads:

“Nothing in the present Charter shall impair the inherent right of individual or collective self-defence if an armed attack occurs against a Member of the United Nations,….”.[10]

That is, military action is forbidden in the absence of an armed provocation, and the legality of the attack on Afghanistan depends exclusively on the evidence presented in Frank Taylor’s report. But it was classified together with the minutes from the pertinent meetings.

However, on 19 May 2008, the US State Department declassified the dispatch which was sent in 2001 to all US representations world-wide, including the ambassadors to NATO headquarters, regarding what to think and say about the 9/11 events.

It is titled: “September 11: Working together to fight the plague of global terrorism and the case against al-qa’ida”.

The text is freely accessible here.

The document is dated 01 October 2001. But as hinted by the URL, it seems to  have been distributed on 2 October five days before the invasion of Afghanistan on October 7, 20101. That is, the day Frank Taylor gave his presentation for the North Atlantic Council and the EU foreign ministers, and the day before the US ambassadors were briefing the governments in the respective NATO capitals.

The text of the dispatch begins by requesting “all addressees to brief senior host government officials on the information linking the Al-Qa’ida terrorist network, Osama bin Ladin and the Taliban regime to the September 11 terrorist attack on the World Trade Center and Pentagon and the crash of United Airlines Flight 93.”

The document appears to be a set of ‘talking points’. The recipients are instructed to use the information provided in oral presentations only and to never leave the hard copy document as a non-paper. Specifically, there is reference to “THE oral presentation”.

These instructions are followed by 28 pages of the specific text.

Tellingly, a section of this dispatch is copy-pasted into Lord Robertson’s statement on 2 October:7

“The facts are clear and compelling[…] We know that the individuals who carried out these attacks were part of the world-wide terrorist network of Al-Qaida, headed by Osama bin Laden and his key lieutenants and protected by the Taliban.”

The conclusion is inescapable – this dispatch IS the Frank Taylor report. It is the manuscript that served not only as the basis for Frank Taylor’s presentation, but also for the briefings given by US ambassadors to the various national governments. Identical presentations were given in all 18 capitals on 3 October, four days before the US-NATO invasion of Afghanistan

Is there any forensic evidence provided in this document to serve as a legal basis for the invocation of Article 5?

Nothing. There is absolutely no forensic evidence in support of the claim that the 9/11 attacks were orchestrated from Afghanistan.

Only a small part of the introductory text deals with 9/11, in the form of summary claims like the citation in Lord Robertson’s press release. The main body of the text deals with the alleged actions of Al-Qaeda and the Taliban in the nineties.

On 4 October, NATO officially went to war based on a document that provided only ‘talking points’ and no evidence to support the key claim.

We are still at war seventeen years later. Five countries have been destroyed, hundreds of thousands of people killed and millions displaced. Refugees are swarming the roads of Europe, trillions of dollars have been spent on weapons and mercenaries and our grandchildren have been shackled with endless debt.

At the opening ceremony for the new NATO headquarters on 25 May 2017, all the leaders from NATO’s member states attended the inauguration of a ‘9/11 and Article 5 Memorial’.[11]

Prof. Niels Harrit is a retired Associate Professor at the University of Copenhagen, Denmark.

[1] The Plan — according to U.S. General Wesley Clark (Ret.) https://www.youtube.com/watch?v=SXS3vW47mOE

[5] Being NATO’s Secretary General on 9/11. https://www.nato.int/docu/review/2011/11-september/Lord_Robertson/EN/ (from which you can deduce that the NATO-ambassadors eat lunch at 3  pm).

[8] Statement to the Press by NATO Secretary General, Lord Robertson, on the North Atlantic Council Decision On  Implementation  Of Article 5 of the Washington Treaty following the 11 September Attacks against the United States. https://www.nato.int/docu/speech/2001/s011004b.htm