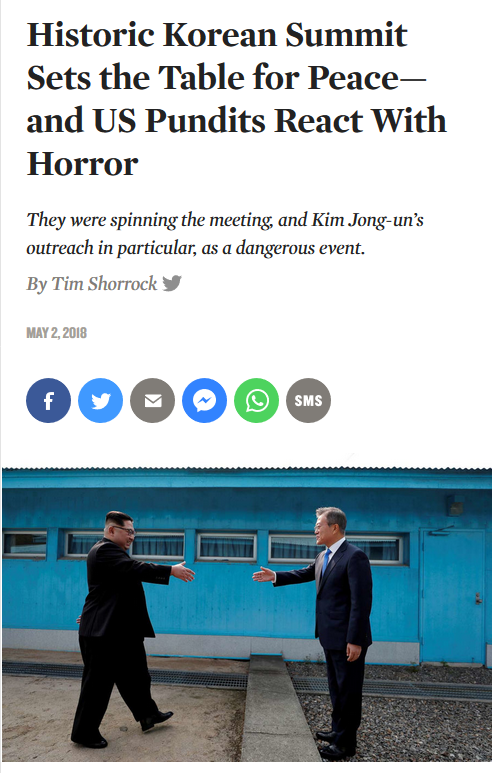 “The pundits who shape the US media’s coverage of North Korea were spinning the summit, and Kim’s outreach in particular, as a dangerous, even ominous, event” (The Nation,  5/2/18).

END_OF_DOCUMENT_TOKEN_TO_BE_REPLACED

We speak to the legendary journalist and filmmaker John Pilger about the events behind the mainstream media headlines on Syria, Salisbury, Yemen and the Korean peninsula. END_OF_DOCUMENT_TOKEN_TO_BE_REPLACED

I first encountered Trotskyists in Minnesota half a century ago during the movement against the Vietnam War.  I appreciated their skill in organizing anti-war demonstrations and their courage in daring to call themselves “communists” in the United States of America – a profession of faith that did not groom them for the successful careers enjoyed by their intellectual counterparts in France.  So I started my political activism with sympathy toward the movement.  In those days it was in clear opposition to U.S. imperialism, but that has changed.

END_OF_DOCUMENT_TOKEN_TO_BE_REPLACED

Reporting Syria: this is a story about people – an interview with Rania Abouzeid
https://www.opendemocracy.net/north-africa-west-asia/richard-salame/reporting-syria-this-is-story-about-people

END_OF_DOCUMENT_TOKEN_TO_BE_REPLACED

By Michael Welch and Mahdi Darius Nazemroaya, May 06, 2018

Arabians have failed in Yemen, and what it wants to do is, and what the United States is doing and even Israel and Britain, is they are arming Saudi Arabia and they’re pushing Saudi Arabia to create an Arab front against Iran. END_OF_DOCUMENT_TOKEN_TO_BE_REPLACED