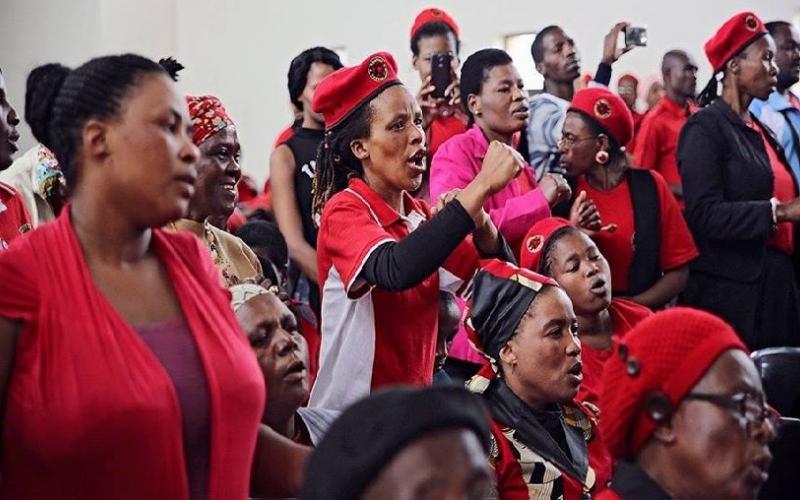 On 11 May 2018, more than two hundred people occupied unused land in Germiston, on the East Rand in Gauteng, South Africa. We laid out our design for the occupation in the afternoon, built throughout the night and slept on the occupied land. Around 350 stands have been marked out via a democratic and carefully planned process. The new occupation has been named the Zikode Extension in honour of S’bu Zikode.

END_OF_DOCUMENT_TOKEN_TO_BE_REPLACED

Murder as a way to make a political point
http://mondoweiss.net/2018/05/murder-political-point/

Democratic party leaders are as always firmly behind their Israeli clients, and their party machinery remains under lock and key. Apartheid laws and periodic mass killings are the everyday workings of a colonial settler state. END_OF_DOCUMENT_TOKEN_TO_BE_REPLACED

“The Palestinians face the last bastion of legalized racial rule on the planet.”

The great nakba, or “catastrophe,”began in 1492, when Christopher Columbus proclaimed the lands of the “Indies” for Spain. Within half a century of his voyage, 95 percent of the inhabitants of the America’s had been killed by European-borne diseases, war, famine and enslavement: 100 million dead, or one out of every five human beings on the planet, the most catastrophic loss of life in recorded history.

END_OF_DOCUMENT_TOKEN_TO_BE_REPLACED

Janine Jackson interviewed Tim Karr about the fight for net neutrality for the May 11, 2018, episode of CounterSpin. This is a lightly edited transcript. END_OF_DOCUMENT_TOKEN_TO_BE_REPLACED

Western Governments Complicit in Crimes against Humanity. “Israel has the Right to Defend itself” Says Trump

Not a single Western country has sofar ordered the expulsion of Israeli diplomats in protest over the mass killings of Palestinian civilians by IDF snipers, including children. A crime against humanity under international law is casually dismissed. “Israel has the right to defend itself”, says  US Secretary of State Mike Pompeo. END_OF_DOCUMENT_TOKEN_TO_BE_REPLACED

The fact that the United States favors Israel in its decades-long “conflict” with the Palestinians is not a subjective or abstract question; it’s a well-established empirical fact. The US gives over $3 billion a year in military aid to Israel (more than the US spends on aid for the last seven countries it’s bombed combined), and defends it from sanction almost uniformly at the UN Security Council. Israel’s support from the US Congress borders on sycophantic. The US, on the other hand, gives no military aid to Palestine, and opposes resolutions that even acknowledge Palestine exists—much less support its resistance to Israeli occupation. The US gives some aid to the Israeli-approved and corrupt Palestinian Authority, but this largely serves to buy off the docile and unpopular PA. END_OF_DOCUMENT_TOKEN_TO_BE_REPLACED