ESSAY OF THE WEEK

Monsanto’s Roundup weedkiller may be even worse for human health than we thought.

As reported this week in the Guardian, new tests show that when Roundup’s key active ingredient, glyphosate, is combined with other chemicals to create the final product, the herbicide is more toxic to human cells than glyphosate alone.

END_OF_DOCUMENT_TOKEN_TO_BE_REPLACED

When Trump killed the nuclear deal with Iran he gave Israel the chance to start a wider war with Syria. An earlier Israeli simulation of the situation had concluded:

The crisis created by the administration regarding the flaws of the nuclear agreement could be exploited to promote issues more urgent for Israel (mainly Iran’s missile program and presence in Syria).

The Israeli government claims that Iranian support for Syria is a threat to its country. That is a bogus claim. The Israeli Prime Minister Netanyahoo uses the “Iran threat” as boogeyman to divert attention from other issues like the various corruption cases against himself.

END_OF_DOCUMENT_TOKEN_TO_BE_REPLACED

Will the Hearings Fill in the Redacted Blanks in the Record?

END_OF_DOCUMENT_TOKEN_TO_BE_REPLACED 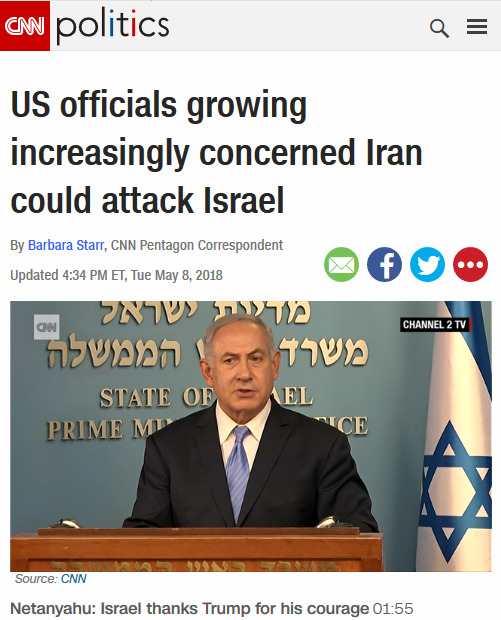 The only named source in Barbara Starr’s report (CNN, 5/8/18), aside from the Iranian president, is British Maj. Gen. Felix Gedney, who says he’s seen “no change” in the behavior of Iranian-backed forces.

END_OF_DOCUMENT_TOKEN_TO_BE_REPLACED

The program provides for the production of about 500 B61-12’s, beginning in 2020, for a cost of approximately 10 billion dollars. (This means that each bomb will cost twice what it would cost if it were built entirely of gold). END_OF_DOCUMENT_TOKEN_TO_BE_REPLACED