This article is posted on behalf of Peter Ford, former UK ambassador to Syria [TH].

It appears that the Russians have pressed the pause button on their plans for an offensive alongside the Syrian government to retake Idlib. By the time they return to play mode the martial music may have changed.

New US policies for Syria

Without fanfare the US has just reformulated its position to create the conditions for it to launch devastating strikes on Syria no longer just on the pretext of alleged use of chemical weapons but on any ‘humanitarian’ pretext the US sees fit. In an interview with the Washington Post on 6 September, James Jeffrey, the hawkish new Special Envoy for Syria fresh from the neocon incubator of the Washington Institute for Near East Policy, did not mince words:

“We’ve started using new language,” Jeffrey said, referring to previous warnings against the use of chemical weapons. Now, he said, the United States will not tolerate “an attack. Period.”

“Any offensive is to us objectionable as a reckless escalation” he said. “You add to that, if you use chemical weapons, or create refu¬gee flows or attack innocent civilians.”

Jeffrey’s remarks were little noticed because he was that day announcing something else more immediately striking: a ‘new’ policy on Syria involving cancellation of Trump’s announced departure of US troops before the end of 2018 and instatement of a plan to stay on indefinitely until achievement of the twin goals of removing all trace of the Iranian presence in Syria and installation of a Syrian government which would meet US conditions – conditions which President Asad would by Jeffrey’s own admission not be likely to meet.

The headlines naturally focussed on this latest Washington folly – do they think Iran will up sticks as long as there is a single US soldier on Syrian soil, or that there is Syrian Mandela waiting in the wings? – and the importance of the remarks about Idlib was missed. Yet those words may be about to bring the world to the brink of global war.

New doctrine for US intervention

What Jeffreys was saying was quite clear. That with or without alleged use of chemical weapons, a sudden exodus of frightened civilians from a part of Idlib, use of the fabled ‘barrel bombs’, or launch of a major offensive will be taken by the US as a trigger for drastic and probably sustained bombing aimed at bringing the government of Syria to its knees.

Until now successive US administrations have been careful to draw the red line for intervention in Syria at use of chemical weapons, presumably on the grounds that there is universal agreement and international law to the effect that use of prohibited weapons is taboo. WMD after all were the casus belli for Iraq, even if it turned out to be false. Now suddenly we have a new, broader and consequently more dangerous doctrine.

The State Department has not yet favoured the American public, Congress or anyone else with an explanation or justification for the change, but we can speculate. Can it be, for example, that US policy makers realise that when the next alleged use of chemical weapons occurs in Syria, as surely it will, it will be more difficult to sell intervention to the public than the first two times because the game has now been rumbled? Not only has the idea that the White Helmets might not be all they seem entered the bloodstream of media discourse, but the OPCW inspectors, able for once after Douma actually to visit a crime site, failed to find any proof of use of prohibited weapons. Add to that those pesky Russians unhelpfully telling the world exactly how and where the White Helmets were going to stage their next Oscar-winning performances. So why bother with all that rigmarole over chemical weapons when Western opinion is already sufficiently primed to accept any intervention whatever as long as it is somehow ‘humanitarian’ and doing down the evil Russians?

Step up ‘Responsibility to Protect’, the innocuous-sounding UN-approved doctrine beloved of interventionists of both Left and Right. Never mind that most legal scholars utterly reject the notion that this doctrine legalises armed aggression other than with Security Council approval or in self-defence. Was it not effectively invoked in the British government’s legal position statement provided at the time of the post-Douma strikes? (The US administration, knowing their audience, never bothered to provide any legal justification whatever.)

Slight snag: although the British government have preemptively sought with their legal statement to give themselves cover to commit acts of war on a whim, and without recourse to Parliament, as long as it can be dressed up as humanitarian, nevertheless there might be considerable disquiet in Parliament and possibly even among service chiefs were the government to appear to be about to launch strikes alongside the US had there not been even the appearance of a chemical weapons incident. For this reason it is likely that the British government will attempt to persuade the US not to give up just yet on chlorine.

Is it this new amplified threat – of strikes whether or not Asad obliges or appears to oblige with suicidal use of chlorine – which has given the Russians reasons to call off the dogs, pro tem at least? Probably not, because the Russians were taking it as read that fake chemical attacks were coming anyway. They will take note however that the US has just effectively lowered the bar on its own next heavy intervention in Syria and will not be deterred by any blowing of the gaff.

For those who naively but sincerely believed that if Asad laid off the chlorine he would not get bombed the world has suddenly become a lot more dangerous. For realists however the new doctrine merely removes a hypocrisy, or rather introduces an inflexion into the hypocrisy, whereby the itch felt by those salivating at the prospect of striking Syria, Russia and Iran can be masked as a humanitarian concern which goes beyond abhorrence of chemical weapons. 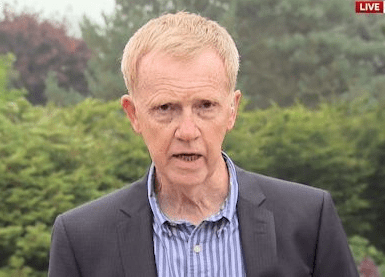