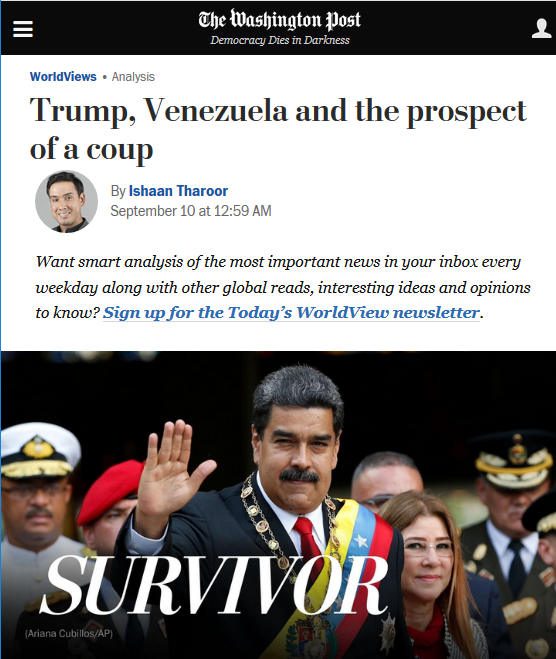 The Washington Post (9/10/18) describes US officials meeting with Venezuelan coup-plotters to discuss the overthrow of President Nicolás Maduro as “more fuel for his paranoia.” And it cites the White House dismissing “speculation that it wants to intervene” in Venezuela—ignoring the fact that the US has for years been heavily intervening to wreck the country’s economy.

END_OF_DOCUMENT_TOKEN_TO_BE_REPLACED

Alphabet/Google-owned YouTube is a censoring machine like its parent company – waging war on speech and media freedom, in cahoots with dark US forces waging war on humanity.

END_OF_DOCUMENT_TOKEN_TO_BE_REPLACED

Moscow has called on the delegations to be “vigilant”

THE HAGUE, September 12. /TASS/. The Organization for the Prohibition of Chemical Weapons (OPCW) can and should play an important role to thwart the staging of a false flag ‘chemical attack’ provocation in Syria’s Idlib, Russian Permanent Representative to the OPCW Alexander Shulgin told reporters on Wednesday.

END_OF_DOCUMENT_TOKEN_TO_BE_REPLACED

‘#Novichok not the only poison being spread around Britain. #LabourAntisemitism #Corbyn.’

Referencing allegations that two Russian agents had been responsible for the poisoning of former Russian spy Sergei Skripal and his daughter Yulia in Salisbury on March 4, the cartoon depicted a British policeman holding up mugshots of a menacing, bug-eyed ‘Jeremy Korbynski’ (wearing an ‘I Love Hamas’ badge) and a vampiric, evil-looking ‘Seumasov Milne’ (wearing a ‘Down With Israel’ badge), with the policeman saying: