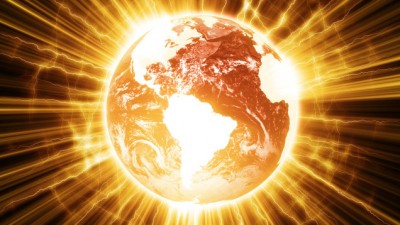 It was balmy and breezy by the bench where I sat outside a public library east of Atlanta, Georgia, brooding about the state of the world.  It seemed like the end times, and I had just attended a fire and brimstone sermon, not perused the mainstream and alternative press. I had just spent a few hours on the internet, noting so many articles that announced that the world as we know it was coming to an end, or maybe just the world.

The American Empire was collapsing, the U.S.A. was a failed state, climate change would soon destroy the world if nuclear war didn’t do it first, etc.  Many of these articles were predicting that soon the elites who run the U.S. would be getting their comeuppance because of hubris and overreach and, like the Roman Empire, the die had been cast and disaster was on the horizon.  Such prognostications were appearing in publications that covered the political spectrum.  All of it was fear-inducing, notwithstanding one’s political beliefs.  Left, right, and center had reasons to be depressed or elated by the claims, depending on one’s politics and existential reality.  And, need I surmise, the writers of these jeremiads were probably writing from a position of personal privilege, not scrounging for their next meal.

And it was a beautiful mid-October day.  The benches by the adjacent church were full of homeless people, their meagre belongings arrayed at their feet.  The susurrant sound of the leaves of the sycamore tree that formed a sacred canopy above me was lulling me to sleep.  In my half-asleep state, I, a northerner, was dreaming I was a Georgian civilian hiding behind the enemy’s lines, those lines being General Sherman’s Union Army’s artillery that was arrayed a few miles to my west and was shelling Atlanta.  And in this reverie I was also aware that, as I wouldn’t have been in 1864, that Sherman would soon leave Atlanta and lead his troops on the savage “march to the sea” that would earn him the appellation as the American father of total warfare that would become America’s tactic from World War I until the present day, a form of warfare that has brought apocalyptic death and destruction to millions around the globe.  Lost and frightened in this half-dreaming state with my eyes closed, I was startled by a thud and dim awareness of a shadow to my left.

Awakening, I saw that a homeless man had sat next to me. We said hello.  “Sorry to give you a fright,” he said, “but all the benches by the church are taken.”  We got to talking.  He told me that he had been homeless for almost two years, that he had originally been from Indiana, where he had graduated from the University of Indiana, and that when he was laid off he was unable to pay his mortgage and had lost his small house.  He looked to be in his late thirties, with a scruffy beard and a very tired face.  His name was Paul.

Among his tattered belongings, I was surprised to see an old paperback copy of a book sticking out of a side pocket of one of his bags.  I knew the title – Raids on the Unspeakable – by the anti-war Trappist monk, Thomas Merton, who died in a very mysterious manner in Bangkok, Thailand fifty years ago this December 10.  Merton’s death was the third that year of prominent and influential anti-war fighters:  Martin Luther King and Robert Kennedy having earlier been assassinated by forces of the American national security state.  Nineteen sixty-eight had been a very bad year for peace and peace-makers.  It was a year of endless war and strife, a time when everything seemed to be collapsing.  And here we are.

A Wish Not Granted. “I Wish that my Country Would Never again Attack Syria or Any Other Country”

Paul told me he had picked the book out of a box of books that had been set out for garbage pickup.  He said he had read a few of the essays and one in particular had struck him.  It is called “Rain and the Rhinoceros.”  I knew and loved the essay and was startled by the serendipity of our meeting.  He said the reason the essay struck home to him was because he had grown up on a farm in Indiana and had spent much of his youth outdoors.  He loved the natural world, and his mother and grandmother had early introduced him to the “Hoosier Poet,” James Whitcomb Reilly, whose poems he had memorized.  He proceeded to recite a stanza from one of them for me, as I, mesmerized, watched his expressive face light up.

Oh! the old swimmin’-hole! When I last saw the place,

The scenes was all changed, like the change in my face;

The bridge of the railroad now crosses the spot

But never again will theyr shade shelter me!

And I wish in my sorrow I could strip to the soul,

And dive off in my grave like the old swimmin’-hole.

Then his face grew dark again, tired and forlorn.  He said that when he lost his home, the last piece of mail he opened was his water bill, and it was sky high.  He thought it appropriate that since he couldn’t afford a home, he couldn’t afford water, the water of life that should be free.  And that’s what so resonated for him in the Merton essay.  Merton’s opening paragraph, which he opened to show me, goes like this:

Let me say this before rain becomes a utility that they can plan and distribute for money. By “they” I mean the people who cannot understand that rain is a festival, who do not appreciate its gratuity, who think that what has no price has no value, that what cannot be sold is not real, so that the only way to make something actual is to place it on the market. The time will come when they will sell you even your rain. At the moment it is still free, and I am in it. I celebrate its gratuity and its meaninglessness.

“When they will sell you even your rain,” he said sadly.  “They sold me a bill of goods.  The American dream!  What a bad joke, here I am, a college graduate, not a drunk or drug addict, and I’m living in a tent in the woods in a ravine by a golf course.  Some nights I think they make it rain on me for fun, as if to say: here’s your free water, you loser.”

He asked about me, and I told him who I was and why I was there.  I mentioned the end-of-the-world articles I had been reading earlier, realizing as I did that I was saying a dumb thing to this this poor guy whose world was in tatters already.

Then he taught me this, as if he were Socrates asking questions.  I paraphrase:

If you were Merton’s “they,” those who rule the American Empire and your oppressed subjects were restless and awakening to their plight, what message would you want to convey to keep the peons from rebelling?  What strategies, short of direct violence, would be most effective in rendering even the relatively well-off middle class passive and docile?  What, in other words, is the most effective form of social control, outside economic exploitation and fear of penury, in a putative democracy when all the controlling institutions have lost the trust of most of the population?

Then, without skipping a beat, he answered his own questions.  You would, he said, tell them that the sky is falling, the empire is collapsing, that the rich rulers are going to get theirs when the system collapses on itself and that this is in the process of happening right now.  So sit back and watch the show as it closes down.  The end is near.

Then he said he had to go.  Lunch was being served at the nearby soup kitchen and if you didn’t get there early, they sometimes ran out of food.

As he walked away, I thought of my vast ignorance and the society of illusions and delusions that I was living in, a constant streaming theater of the absurd.  I wanted to cry for this man and all people, even myself, as he disappeared around the corner.  He seemed to carry his loneliness in the old backpack that weighed him down.  As he turned the corner, he looked back and waved, a smile on his face.  I felt overcome, and when I recovered my bearings, I noticed he had left the book on the bench.  But by then he was long gone.  I opened it to a page that was dog-eared, and read these words of Merton, another solitary man in the woods, his solitude a choice, not, like Paul, an imposed necessity, at least the living arrangement part:

It is in the desert of loneliness and emptiness that the fear of death and the need for self-affirmation are seen to be illusory. When this is faced, then anguish is not necessarily overcome, but it can be accepted and understood. Thus, in the heart of anguish are found the gifts of peace and understanding: not simply in personal illumination and liberation, but by commitment and empathy, for the contemplative must assume the universal anguish and the inescapable condition of mortal man. The solitary, far from enclosing himself in himself, becomes every man. He dwells in the solitude, the poverty, the indigence of every man.

Next to this paragraph was the word “Paul,” written in blue ink.

It was such an achingly beautiful day.  I got up and left the book on the bench, as I too walked away, after writing “Ed” in black ink next to Paul’s blue.

We are all bruised, aren’t we?  But often times those bruised the most have the most to give.

This is Paul’s gift.