It was intriguing that the murder of Saudi journalist Jamal Khashoggi in the Saudi consulate in Istanbul on October 2 was apparently recorded in some fashion. The BBC reported that “A Turkish security source has confirmed to BBC Arabic the existence of an audio and a video recording. What is not clear is if anyone other than Turkish officials has seen or heard them. One source is cited by the Washington Post saying men can be heard beating Mr Khashoggi; it adds that the recordings show he was killed and dismembered.”

END_OF_DOCUMENT_TOKEN_TO_BE_REPLACED

Israel’s former Chief Justice Aharon Barak stated in a recent lecture that “what happened in Germany [the rise of the Nazis] can happen here [in Israel].” He went on to say that a regime that does not respect the separation of powers or human rights cannot be called democratic. This statement brought about a swift, furious response via Twitter from Education Minister Naftali Bennet, claiming that what the Judge said was a “total lie” and that it is wrong to compare what he calls “Israel’s fight for survival in its own land” with the Nazi persecution of Jews.

END_OF_DOCUMENT_TOKEN_TO_BE_REPLACED

The Khashoggi Crisis: A Blessing in Disguise for Pakistan’s Imran Khan
https://www.globalresearch.ca/khashoggi-crisis-blessing-disguise-pakistans-imran-khan/5657896

END_OF_DOCUMENT_TOKEN_TO_BE_REPLACED

Human rights campaigning organisation Liberty has called on Nottingham City Council to abandon plans which will penalise some of the city’s most vulnerable people – and anyone trying to help them.

The organisation responded to a consultation on the council’s proposed Public Space Protection Order (PSPO), which closed on Wednesday 3 October.

END_OF_DOCUMENT_TOKEN_TO_BE_REPLACED

The October 16 issue of NY Review of Books has an article by Janine di Giovani titled “Why Assad and Russia Target the White Helmets“. The article exemplifies how western media promotes the White Helmets uncritically and attacks those who challenge the myth.

END_OF_DOCUMENT_TOKEN_TO_BE_REPLACED

I think that Vladimir Putin at Valdai not at all incidentally started talking about the increased danger of nuclear war, repeated the axiom about the readiness of Russia to take away the whole world with itself, and discussed the existence of the right to make a preventive strike.
END_OF_DOCUMENT_TOKEN_TO_BE_REPLACED

Large concentrations of harmful toxins have been found in the dust and soil around Grenfell Tower. The toxins, which are potentially carcinogenic and may have long-term health implications for survivors of the fire and for local residents, have been identified in the preliminary findings of a study by toxicology expert, Professor Anna Stec.

END_OF_DOCUMENT_TOKEN_TO_BE_REPLACED

Just a few years ago, it would have seemed most unlikely that developments in the British Labour Party would attract widespread international attention among those looking for the renewal of socialist possibilities in the 21st century. That this is the case today is a credit to the enthusiasm and creativity of a new generation of socialist activists in Britain and the political perseverance and dedication of a coterie of long-committed socialists around Jeremy Corbyn. Yet if the election of a Corbyn government in Britain is not to be quickly followed by profound disappointment on the left internationally, as was the case with Syriza in Greece, British realities need to be kept in sober perspective.
END_OF_DOCUMENT_TOKEN_TO_BE_REPLACED

In past warming events, atmospheric CO2 rose too fast for many species to adapt. Today it is rising 10 times faster than at any time in 66 million years.

Katrin Meissner is an Associate Professor and Kaitlin Alexander is a PhD Candidate at the Climate Change Research Centre, University of New South Wales.

END_OF_DOCUMENT_TOKEN_TO_BE_REPLACED

How easy it is to give awards to terrorists 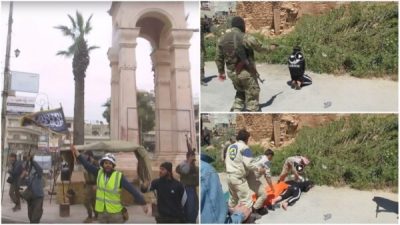 I am often asked to explain why countries like Iran appear to be so aggressive, involving themselves in foreign wars and seeking to create alliances that they know will provoke the worst and most paranoid responses from some of their neighbors. My response is invariably that perceptions of threat depend very much on which side of the fence you are standing on. Saudi Arabia and Israel might well perceive Iranian actions as aggressive given the fact that all three countries are competing for dominance in the same region, but Iran, which is surrounded by powerful enemies, could equally explain its activity as defensive, seeking to create a belt of allies that can be called upon if needed if a real shooting war breaks out.