Demonstrations by French “yellow vest” protesters on Saturday, January 12, grew again, amid rising opposition among broad layers of the population to President Emmanuel Macron. Interior Ministry sources claimed 84,000 people demonstrated in the ninth straight weekend of mass protests against Macron, compared to 50,000 the week before—figures that, as even the official press noted, seemed to be substantial underestimates.

As the “yellow vest” protesters marched, teachers who have joined “red pen” groups on social media, inspired by the “yellow vests,” to protest cuts to school funding and living standards by successive French governments, also held rallies and marched in several cities across France. The fact that sections of workers are advancing social demands in alliance with the “yellow vests,” points to the growing strength of opposition and protest in France. There is also growing awareness of the mounting social struggles in Europe and America.

Protests took place in cities across France. A special protest called in the smaller city of Bourges, near the center of France, went ahead, as over 6,300 “yellow vests” defied a ban from the police prefecture, penetrating the police security perimeter around the center of town. Riot police charged the protesters and made 18 arrests. “Yellow vest” protesters also peacefully escorted BFM-TV reporters away from the city in retaliation for the channel’s attacks on the “yellow vest” movement.

Mass protests and clashes with police occurred in smaller cities across France. In Nîmes, around 3,000 protesters clashed with riot police, who fired thick clouds of tear gas around the Roman arena and the police prefecture. Over 2,000 “yellow vests” mobilized in Rouen and expelled plainclothes policemen who tried to infiltrate their protest. In Caen, 4,000 protesters rallied and clashed with police around the train station, tearing up train tracks to throw material at the security forces.

In Paris, at least 10,000 “yellow vest” protesters marched in four separate rallies, clashing with riot police around the Arch of Triumph, while “red pen” teachers also held protests in the capital.

WSWS reporters attended the protest at Bastille Square, where thousands of “yellow vests” were marching east into the heart of the city. Protesters shouted “Rise up, Paris,” “Macron resign” and “Release Christophe,” referring to the detention of former professional boxer Christophe Dettinger after he punched riot police attacking a female “yellow vest” protester a week ago. Philippe, a public service worker, told the WSWS: “Like every week, we want the president to do something on taxation and to improve salaries. Getting the right to decide things via referendum is important. We vote in presidential elections and then for five years they have a green light, they do what they want and tell us to shut up and act like sheep.” He added, “It’s not right that people who paid for 40 years into Social Security get just 800 euros a month, then they’re told they will get housing benefits cut. When you see how the people in the government spend money, it’s a scandal.”

Philippe denounced the police repression of the “yellow vest” protests: “I’ve been to all the protests from the beginning, each time we go we get tear gassed. … Then you look at the number of wounded!” Recalling the “yellow vests” who have lost hands to stun grenades or eyes to rubber bullets, Philippe said: “It’s not proportionate violence at all. Rubber bullets are supposed to be fired below the waist. But it’s not legs, but torsos and eyes that have been hit.”

Philippe added that it was now a matter of not just a French, but a European struggle against international support for Macron in the ruling elite: “Many people had hopes in Macron when he first came in. He said he would blow up all the political parties. And he only sank us deeper into poverty. One has to say, he worked in finance. In any case, they’re all directed by the European Union. Europe is the problem now.”

Asked about solidarity with Ford workers threatened with job losses across Europe, and US teachers going on strike, Philippe said: “We’re in solidarity with all those who are oppressed and do not have money. Across Europe we have discussions with ‘yellow vests’ abroad. This could develop into a European movement, I think, that could be more serious and get a lot more people involved. But it’s been eight weeks we’ve been in the street and we’ve gotten nothing.”

Also near Bastille Square, Manu explained to the WSWS why he was protesting: “We pay so many charges, we have nothing left at the end of the month. We’re just the 12th today, already I have nothing left, and I’m working. It’s not just me, it’s everyone, all of France.”

Asked about the role of the trade unions, Manu said he did not see them as different from the ruling parties: “No, no one helps us. We’re alone. They should all get out, that is the only thing to be done. We struggle for months for miserly salaries, they get things for themselves and their families. It’s enough.”

WSWS reporters spoke to Thibault, a physics student and “yellow vest,” on Republic Square. He said, “Our votes are used to legitimize policies we didn’t vote for. What triggered the movement, the basic issue, is that over the last decade we’ve seen an explosion of social inequality around the world. In France, dividends paid to shareholders in the companies rose 23 percent, the number of millionaires surged and the Tax on Wealth (ISF) was eliminated.”

Thibault stressed he had no hopes that Macron would change policies: “Police violence is constantly hidden, there are serious wounds, limbs torn off.” 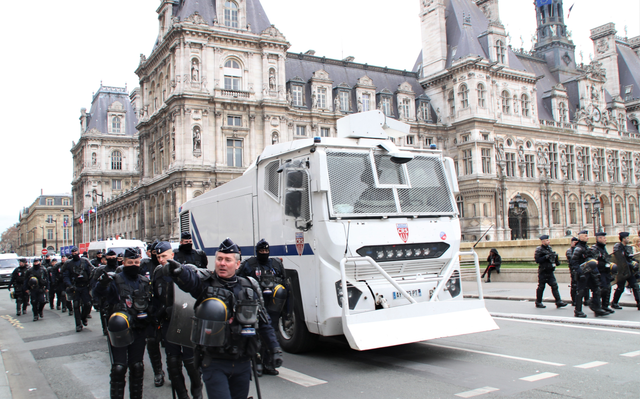 A police water cannon in front of Paris City Hall

He also refuted claims that the “yellow vests” were a right wing movement: “I’ve seen a few people with royalist flags. I would like to think it is a very minority fringe of the movement, as the demands of our movement up until now have precisely been in opposition to what the far right defends today. If people come to tell us our problems are caused by immigrants, we don’t want to hear that.”

WSWS reporters also saw “red pen” teachers protesting in Paris. Aline mocked government spokesman Benjamin Griveaux’s denunciation of “yellow vests” who broke into his ministry in protest: “I just laugh when I hear people from Griveaux’s ministry complain about their broken-down door, given what we see at our school’s door. I come from Drancy,” a working-class suburb of Paris, “and I’ll invite you to see the state of our schools, holes in the floors and broken doors.”

She added, “In education our wages have been frozen for about 20 years. We’ve lost about 20 percent of our real wages in that many years. Now you start at 1,350 euros per month if you are tenured, less if you’re a contract worker, who won’t even get paid during summers … We are seeing in education the labor relations of the private sector.”

Mélanie told the WSWS, “we will have to take the money where it is.” She added, “We have very few resources in our schools, we pay a lot out of pocket. I bring lots of my kids’ toys to school. We buy our own pens, supplies, calendars, paper, ink. We also ask parents to help with photocopying.” She added, “The ‘yellow vests’ motivated us to do something.”

Denouncing criticism of teachers’ strikes in the media, she said: “We’re not privileged, we’re not lazy. … Starting salaries are under 1400 euros.” She added, “I’ve wanted to be a teacher since elementary school. I had a fantastic teacher … Her dedication to her students stunned me. Since then I knew I wanted to teach, I wanted to help kids in trouble and help make them citizens.”

She added that she saw this as an international issue: “I’ve seen that teachers in the United States are also taking action. It’s necessary, it must be international, because it’s not just in France. Everywhere it’s basically the same, education is ignored compared to other things. At a certain point it has to stop and I am in solidarity with their struggles.”