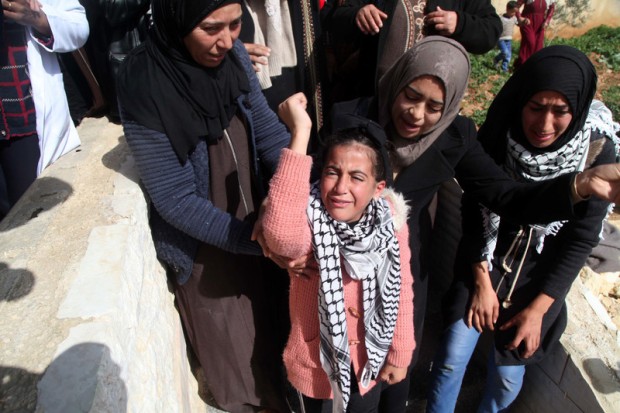 Relatives of Hamdi Naasan, who was killed during a settler incursion into the occupied West Bank village of al-Mughayyir a day earlier, mourn during his funeral on 27 January. – Ahmad Arouri APA images

A Palestinian father of four was fatally shot on Saturday as Israeli settlers, protected by soldiers, stormed the village of al-Mughayyir, near Ramallah in the occupied West Bank.

Hamdi Talib Saadeh Naasan, 38, a former prisoner, was taken to hospital in critical condition where he died of his injuries.

The settlers entered the village Saturday afternoon “and rioted on the streets while opening fire at several houses,” according to the Palestinian Center for Human Rights.

Palestinians gathered to resist the settler and army incursion with stones and empty bottles.

In response, “the settlers immediately and randomly fired a barrage of bullets,” wounding Naasan “with a bullet that entered his lower back, hit the lungs and then exited from the chest,” PCHR stated.

“Following that, the Israeli forces moved into the village to provide protection for settlers and opened fire at the Palestinian protesters,” PCHR added.

This photo of Naasan with his children circulated in Palestinian media following news of his death:

Twenty-two Palestinians were treated in hospitals, according to PCHR. The Palestinian health ministry said that six were injured with live ammunition.

The Israeli army stated that Naasan was shot by settlers, claiming that its own forces only used so-called riot control weapons such as rubber-coated metal bullets.

Palestinian reports also state that Naasan was shot by the settlers.

However, according to the newspaper Haaretz both Palestinians and settlers say that the army also used live fire.

The Israeli army has previously made false claims of not using live fire when its forces in fact did so, such as in the 2014 killing of Palestinian teenager Nadim Nuwara.

On Sunday, following Naasan’s funeral, Palestinians in al-Mughayyir continued to respond to the presence of Israeli occupation forces, using slingshots and stones:

Palestinians in al-Mughayyir come under frequent attack from two nearby Israeli colonies, Mevo Shilo and Adei Ad, though the settlers involved in Saturday’s violence were from the latter settlement.

Haaretz journalist Gideon Levy, who visited the Palestinian village earlier this month, wrote that farmers are subjected to “a rotation of hate crimes” from the two settlements.

“The settlers descend upon fields that aren’t theirs for the sole purpose of evicting residents from their land and striking fear,” Levy wrote. “That’s the aim, that’s the goal.”

Last November, the UN humanitarian coordination agency OCHA noted that it had documented more than 200 incidents attributed to Israeli settlers resulting in Palestinian casualties or damage to property since the start of 2018.

“As a monthly average, this is the highest level of incidents recorded since 2014 and represents a 57 and 175 per cent increase compared with 2017 and 2016 respectively,” OCHA stated.

Israeli police in the occupied West Bank have ordered an investigation into Naasan’s killing.

But according to the Israeli human rights group B’Tselem, which stopped cooperating with such investigations in 2016, Israeli probes into killings and injuries of Palestinians form a system that “whitewashes” and “serves as a fig leaf for the occupation.”

Increasingly, according to Yesh Din’s research, Palestinians do not even bother to report crimes against them to the Israeli police, given the effective impunity Israeli perpetrators enjoy.

Police, however, did last week charge a 16-year-old Israeli from the Rehelim settlement with manslaughter for intentionally dropping a two-kilogram rock onto a moving car last October, killing Palestinian mother of eight Ayesha al-Rabi.

The reduced charge of manslaughter, rather than murder, “may actually encourage lawlessness” by settlers by sending a signal that they will continue to be treated leniently even when they intentionally kill Palestinians, Haaretz columnist Mordechai Kremnitzer observed.

On Saturday, UN envoy Nickolay Mladenov condemned the settler assault on al-Mughayyir as “shocking and unacceptable.”

Today’s violence in #AlMughayer is shocking & unacceptable! #Israel must put an end to settler violence & bring those responsible to justice. My thoughts & prayers go out to the family of the #Palestinian man killed & those injured. All must condemn violence, stand up to terror.

“Israel must put an end to settler violence and bring those responsible to justice,” Mladenov said.

Offering “thoughts and prayers” to Naasan’s family and to the injured – a rare step for international diplomats who typically only express concern for Israeli victims of violence – Mladenov added, “All must condemn violence, stand up to terror.”

Yet the justice that Mladenov demanded is an unlikely outcome as lenient treatment or outright impunity is the norm for Israelis who kill or injure Palestinians.

In one of the rare cases of an Israeli soldier being convicted for killing a Palestinian, army medic Elor Azarya received a slap on the wrist for the 2016 point-blank execution of Abd al-Fattah al-Sharif, who was lying injured and incapacitated on the ground in Hebron.

After the killing, during his trial, and after his release from just nine months in prison, Azarya has been treated as an Israeli national hero.

“I am sitting next to my friend Elor Azarya, whom we enlisted to our primaries campaign, and with God’s help, together with him, we will succeed,” Mazuz, a member of Prime Minister Benjamin Netanyahu’s Likud Party, said in a video posted on Facebook.