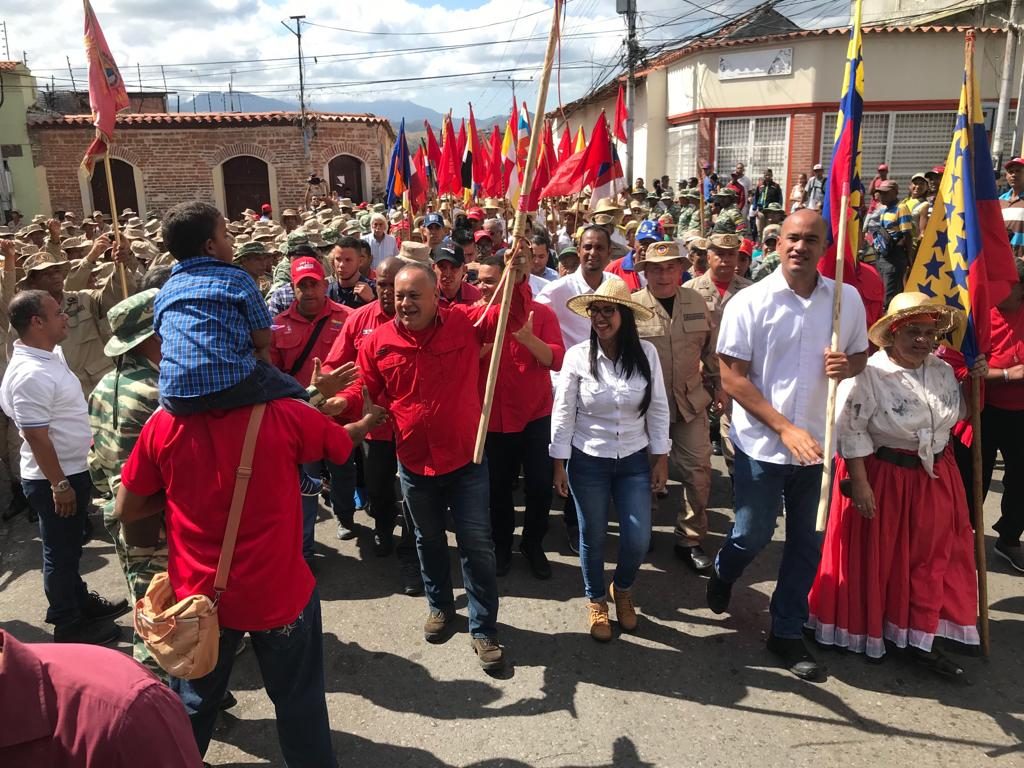 Proxies of and propaganda for the intervention in Venezuela are exposing their character and capacity. At the same time, UN Secretary-General Antonio Guterres has renewed his offer to help end the crisis in Venezuela during talks with Venezuela’s foreign minister. The following update is based on media reports:

Guterres met with Venezuelan Foreign Minister Jorge Arreaza in New York, at the request of Venezuela.

During the meeting, the UN has called for serious political negotiations between the two sides to prevent a slide toward more violence in Venezuela.

Story of a bridge

Photos and video of oil tankers and shipping containers blocking a bridge between Venezuela and Colombia were used as proof Caracas was “blocking” US aid. Left out was the fact that the bridge was never open for traffic.

The bridge figured prominently in intervention related activities by imperialism to paint the elected government of Venezuela as hostile to the people, and build support for the US-backed self-proclaimed president Juan Guaido.

US Secretary of State Mike Pompeo used the photo to claim that “Venezuela’s military under Maduro’s orders is blocking aid with trucks and shipping tankers. The Maduro regime must LET THE AID REACH THE STARVING PEOPLE.”

However, independent journalists and observers revealed that, while the containers may have been placed by the Venezuelan government, the bridge was already blocked from the Colombian side. In fact, a cursory search online reveals that the bridge had never actually been open for traffic.

The bridge was intended to connect Cucuta in Colombia to Ureña in Venezuela, spanning the Tachira river. According to local media, construction work on it was finalized in early 2016. By that time, Colombia had cracked down on its border with Venezuela due to the exodus of Venezuelans claiming economic hardship and famine in their homeland.

Photos from 2017 show the fencing and concrete slabs blocking the bridge on the Colombian side, as blogger Justin Emery pointed out on Medium.

There are two other bridges linking Colombia to Venezuela in the same area, both named after heroes of the 1800s struggle for independence from colonial Spain: Simón Bolívar and Francisco de Paula Santander.

Though Venezuelan border guards are not allowing the USAID vehicles in, both bridges remain open to cross-border traffic. So why would the US government and most Western media outlets claim the aid is blocked by showing photos of the never-operational Tienditas bridge?

The propaganda is part of imperialism’s tact to manipulate public mind. It is part of a media campaign to delegitimize Venezuela.

Amoroso alleged Guaido has “received money from international entities without any type of justification.”

The chief national auditor also accused the member of the legislature of hiding or falsifying “data contained in his sworn asset statement.”

The comptroller general said that according to the country’s constitution, members of the National Assembly cannot “receive any type of payment from other public or private job,” and they “cannot be owners, administrators or directors of companies that contract with legal entities.”

The investigation against Guaido is partly based on anti-corruption law, Amoroso added.

During a recent interview with RT Spanish Guaido made some startling statements.

Guaido claimed that the UN Security Council (UNSC) not only discussed, but also “endorsed the support for the process which we are doing now.”

The fact is: On January 26, the UNSC indeed met to deal with the crisis in Venezuela, but it failed to reach a unanimous agreement. As the body noted in a press statement, the council members remained “divided” in their assessment of the situation on the ground. No resolutions in support of Juan Guaido and declaring himself ‘interim president’ of Venezuela were passed or even voted on.

The leader, considered a proxy, said that “the [dire] humanitarian situation in Venezuela and the sanctions began a week ago.”

The latter is correct if only the most-recent round of sanctions imposed by the US on January 28 is taken into account. But Venezuela has been facing an array of restrictions since as early as 2014, when a bill authorizing sanctions against Venezuelan officials was signed by then-president Barack Obama. The first round of sanctions came in March the following year. US President Donald Trump stepped up economic pressure on Venezuela in August 2017 by banning financial institutions from dealing with the nation’s government and the state oil company PDVSA. Three more rounds of restrictions against Venezuela’s energy sector were imposed in 2018, including a ban on buying debt from the Venezuelan government.

Guaido insisted that the sanctions were enacted “against corrupt officials and thieves.”

But his claims go against the assessment from the UN. The sanctions “are effectively compounding the grave crisis affecting the Venezuelan economy, adding to the damage caused by hyperinflation and the fall in oil prices,” UN Special Rapporteur and human rights expert Idriss Jazairy said just two weeks ago.

A rather grim prediction came out last year as well. A report from the US Congressional Research Service said that analysts are “concerned that stronger sanctions could exacerbate” Venezuela’s economic crisis. It also pointed out that “many Venezuelan civil society groups oppose sanctions that could worsen humanitarian conditions.”

Guaido claimed that he took on the role of the ‘interim president’ based on Article 233 of the constitution. He claimed he had to do so due to the “lack of elections” as the opposition deems the presidential vote last May illegitimate although Maduro received nearly 68 percent of the votes.

The Article 233 lays out specific reasons for dismissing the president, such as poor mental or physical health, or a verdict from the nation’s highest court, and doesn’t directly mention elections.

The article further says that if the president-elect can’t take office, a new election must be called and held within 30 days.

Guaido refused to name the exact date of the new vote, despite being asked several times. He only gave a vague promise that it will take place after the end of the “usurpation” of power by the current government.

Guaido alleged that ‘corrupt’ Venezuelan officials “have stolen $700 million” from the Russian oil and gas giant, Rosneft, which invested in several projects in the South American country.

However, the Rosneft vice president Aleksandr Krastilevsky, “all payments” from its Venezuelan partner, PDVSA “are being made in accordance with the schedule.”

“We call on the presiding brothers of Latin America and the world to continue looking for a peaceful solution to the situation in Venezuela. We cannot be responsible for a war between brothers which would also violate the norms of international law.”

The Bolivian president continued on to denounce U.S. attempts to send aid to Venezuelans via the Caribbean and Colombia without state approval under the guise of a philanthropic gesture.

Last week, both the International Red Cross and the Red Crescent refused to participate in the operation and override Venezuelan mandate.

Morales wrote, “The head of the delegation of the International Committee of the Red Cross in #Colombia, Christoph Harnisch, will not participate in the distribution of ‘help’ from #US to #Venezuela because it is not ‘humanitarian.’ We’ve said it before: Humanitarian Aid is an institution that must be protected.”

“In Venezuela there is no problem of democracy or dictatorship, the problem is not Nicolas Maduro, the problem is Venezuelan oil. The United States with any pretext wants to take over the natural resources. Any “humanitarian act,” is North American intervention.””

Bruno Rodriguez, Foreign Affairs Minister of Cuba, came out on Twitter to admonish the U.S. for its cynical use of a resolution in the UN Security Council pushing for “humanitarian aid” in Venezuela in order to get access to the country and continue its policy of intervention in the country.

The Cuban Foreign Minister made a series of tweets that condemned the U.S. measures dubbing them as an “imperialist coup d’état.

Arreaza thanked the UN official from his Twitter account, saying that “multilaterism needed to be strengthened in order to defend the principles of the UN Chart: Peace, Development and Human Rights.”

On Friday, Guterres officially recognized the representation of the Venezuelan Government – led by its Foreign Minister Jorge Arreaza – while rejecting the interests of deputy of the National Assembly (AN) Guaido. 23.

Venezuelan President Nicolas Maduro launched the strategy  “Marca Pais – Venezuela open to the future”, with which he hopes to boost tourism and bring to light the truth about the country, which has been attacked by a media war.

“Much of the media war to which Venezuela is subjected in the world, has had as its goal that nobody comes close to Venezuela, that no one comes to invest, Venezuela being the best country in the world for investment,” said the president.

The president explained that it is a win-win strategy, because the country wins with income and with the demonstration of its truth, and also win over public and private entrepreneurs.

“Venezuela needs, today more than ever, a diversified economy that seeks quality production and the placement of these products in the world, new sources of income for national wealth.”

Since Monday, the Instituto Marca País started operations, which will bring together investments, tourism development, among other functions.

Venezuela’s state oil company PDVSA has not opened any fresh accounts in Russia’s Gazprombank, the latter said, calling a report by Reuters on the alleged transfer inaccurate.

“No new accounts have been opened,” the bank told Russian media. It also said that the information provided by Reuters “does not reflect the actual situation.”

At the same time, the bank also admitted that PDVSA does have some accounts in Gazprombank but they were opened “several years ago” as part of the oil giant’s cooperation with some Russian companies.

Alexander Shchetinin, the head of the Russian Foreign Ministry’s Latin America department, said on Monday that Moscow hasn’t received any such request from Caracas.

Shchetinin strongly warned the US against making calls on the Venezuelan military to drop support for President Nicolas Maduro, saying it represented an “unthinkable meddling into foreign affairs of a sovereign nation”.