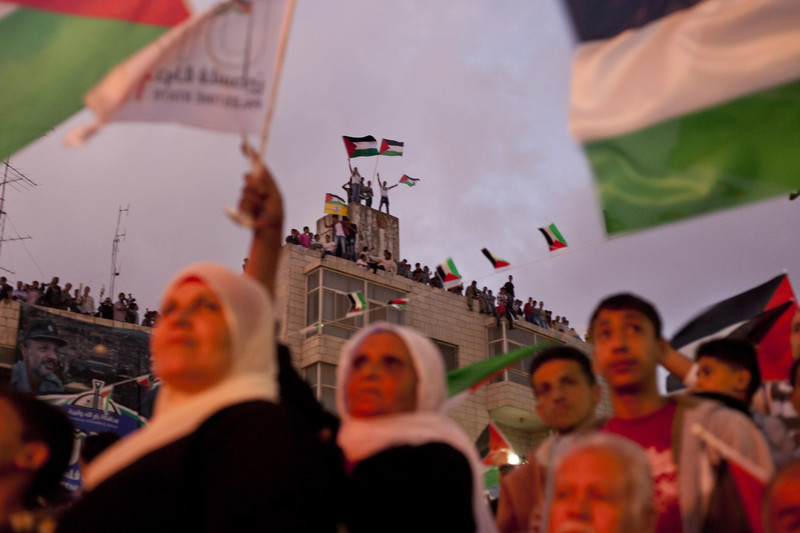 Palestinians are at a critical juncture. Oren Ziv ActiveStills

The resignation of a government and dismissal of parliament – all to bolster the position of a president – doesn’t inspire confidence.

In fact, the Palestinian Authority finds itself in its weakest position in 25 years of existence. Its head, Mahmoud Abbas, struggles for both relevance and legitimacy. The Palestinian political division between Abbas’ Fatah party and Hamas is deeper than ever, and no viable alternatives have risen in their stead.

Israel has long felt unbound by any strictures of the peace process and sits unchallenged and unaffected, with both the Oslo negotiations strategy of Fatah and the armed resistance of Hamas failing to make an impact. Indeed, in a few months Israelis go to a general election with the issue of the Palestinians only a priority for minor parties.

And on the international front, actors both regional and beyond have failed to step into a breach left by the US, which has ceded any credible mediation role (now even conducting its diplomacy by Twitter) as its longstanding bias toward Israel has become paralyzing policy orthodoxy under Donald Trump.

This is therefore a critical juncture for the PA, an institution that was set up to be a precursor to a state but now could well be entering its endgame without getting close to realizing that goal.

And it is a critical juncture for Palestinians generally, failed by their leaders, divided among themselves, dismissed by the Israelis and forgotten internationally.

On 29 January, PA Prime Minister Rami Hamdallah’s government – billed, when it was formed in 2014, as a unity government comprised of technocrats and supported by both Abbas’ Fatah and Hamas in Gaza – submitted its resignation.

It did so to clear the way for Abbas to form a new government after he dismissed the Palestinian Legislative Council in December and called for new parliamentary elections.

Hamas denounced the first move as an attempt by Abbas to establish a “separatist government.”

It called the second decision – partly taken in a fit of pique, after Fatah saw efforts to celebrate the anniversary of its founding in Gaza thwarted by Hamas authorities in the territory – “invalid” and said it would only harm unity efforts.

Hamas has repeatedly stated, however, that it is ready for new elections, both presidential and parliamentary.

The move to dissolve parliament is largely symbolic. The legislative body has not sat since 2007 when Hamas ousted PA forces from Gaza after they proved reluctant to abide by the results of the 2006 elections that Hamas won. Legislation has been imposed by presidential decree since and that will continue.

Less symbolic was Abbas’ decision on 6 January to withdraw PA officers from the Rafah crossing between Gaza and Egypt. That move forced Egypt to temporarily shut down the crossing for anyone wishing to leave Gaza.

PA officers had been deployed there in November last year as part of Egyptian-mediated efforts to bring the PA and Hamas closer and ease the more than 10-year-old Israeli-Egyptian blockade on Gaza that has seen poverty in the territory spike, the economy crumble and a humanitarian disaster loom.

Their deployment saw the crossing open more regularly for passenger traffic after remaining almost permanently closed since Abdulfattah al-Sisi came to power in Egypt in a 2013 coup. Since their withdrawal, the crossing remained closed for nearly all of January before being opened again indefinitely early this month.

The withdrawal of PA officers is meant to put a financial and political squeeze on Hamas in Gaza, but the PA is also feeling the pinch in the West Bank.

Last year, the US suspended its financial assistance to UNRWA, the United Nations agency that cares for Palestinian refugees. Now new legislation, allowing US citizens to sue foreign recipients of US aid over complicity in “acts of war,” has forced the PA to reject any US government aid.

Having already rejected US diplomacy, after Trump’s bungling over Jerusalem, rejecting US government aid is perhaps the next logical step. However, the Anti-Terrorism Clarification Act didn’t give the PA much option and has hit projects funded by USAID, the State Department development agency, as well as US funding for Palestinian security forces.

All the while, Israel is doubling down on the unprecedented carte blanche this US administration is giving it.

On 28 January, Israeli Prime Minister Benjamin Netanyahu announced that Israel would reject an extension to the Temporary International Presence in Hebron, an international civilian monitoring mission hated by Israeli settlers in the occupied West Bank city.

TIPH’s reports were, by agreement, kept confidential, which is why critics dismissed the mission as a powerless irrelevancy. Nevertheless, data was kept for the record, and, as these things so often are, eventually leaked to the press in December.

To the surprise of absolutely no one, the one TIPH report that has ever been leaked concluded, based on 20 years of monitoring, that Israel is in “severe and regular” breach of international law in Hebron.

There is symbolic significance in not extending TIPH’s mandate. The present format was first established in 1997, but an earlier iteration was created to prevent a repeat of the 1994 massacre of 29 Palestinians at prayer by a local Israeli settler and army doctor, Baruch Goldstein.

All alone and lonely

Israeli settlement building is also scaling new heights as Israel seeks to physically divide the West Bank in two, severing Jerusalem in the process, under the E1 plan, originally championed by Yitzhak Rabin in 1995.

The PA has tried to fight back against growing international impotency and disinterest. It secured leadership of The Group of 77 (actually comprising 134 nations including China), the largest grouping of countries inside the UN. But this is mostly symbolic: Most people would struggle to know which was the last country to lead the G-77 (Egypt), if they’ve even heard of the group before.

The Palestinians are also encouraging the European Union to be more active as a peace mediator. But this too has had little effect. French President Emmanuel Macron has said repeatedly his country would present its own peace plan if the US failed to come up with one: The US hasn’t. Nor has France.

The EU remains the PA’s biggest donor and European countries stepped up their contributions to UNRWA after the US ended its funding. But fatigue matters, and if European countries conclude that there is no political horizon for a two-state solution that they have argued again and again is the only acceptable outcome, then to what end the nearly $1 billion in aid the EU pays every year to the PA?

Already, some are arguing that international funding must take into consideration the absence of a political horizon.

And when even The Washington Post is reporting these days that the peace process has failed, then it would appear official.

But does this mean that the game is over, decisively concluded in Israel’s favor?

With more than 620,000 settlers now in the West Bank, including East Jerusalem, creating a viable, contiguous state for Palestinians has simply become physically impossible.

That leaves three options: Move Israeli civilians from occupied territory (and implement international law), force Palestinians out of the West Bank, including Jerusalem (and engage in another massive round of ethnic cleansing), or treat the two as inextricably conjoined.

Israel has had 25 years to prove that it is willing to abide by international law, end its civilian settlement project in, and relinquish control over, occupied territory, while allowing refugees their right to return. It has not seized the opportunity.

In that time, it is not only the number of settlements and settlers that have grown. There are now nearly as many, if not as many or more, Palestinians in the area of historic Palestine, from river to sea, as there are Israelis.

There has long been a debate about two states or one state that has morphed into one about three states or no states. But the reality is this: There is only one state on the ground. It has disputed borders and contains two peoples that largely adhere to three religions.

Israel has made it impossible for the two to physically separate. There is no suggestion from anyone – in Israel or elsewhere – how to change that. There is only wishful thinking and intransigence.

What is therefore left is to decide how this one state functions.

So far, this one state functions like an apartheid state. Palestinians live under a separate legal system to Israelis, and the latter are in uncontested and complete overall control.

There are nuances and variations within this picture: Palestinians with Israeli citizenship, Palestinians with Jerusalem IDs, Palestinians in Gaza or in Hebron, all of whom live in slightly different circumstances. Yet even if some of them enjoy greater freedoms than others, they are alike in that all enjoy fewer rights than the Jews who live around them.

Apartheid states can’t continue forever. Benny Morris – a historian who helped lay bare Israel’s guilt in creating the Palestinian refugee problem only to complain that that first round of ethnic cleansing in 1948 did not go far enough – understands that the idea of two states for two peoples has been buried with Israeli settlements.

This is the outcome he foresees.

“The occupation regime will continue to function. The Arabs will suffer and the Jews will also suffer (although a bit less),” Morris wrote recently. “At the end of the process, the one state will take shape.”

Staunch Israel supporters understand this. “How long can you live with the status quo?” asked Daniel Kurtzer, a former US ambassador to Israel. “We’re going to wake up one day and it’s going to be effectively one state.”

The only tweak is they – along with think tanks like the Israeli Institute for National Security Studies – see this as developing “at the end of the process,” or ”one day.” The INSS cautions against the “slide into the one-state scenario.”

In fact it is already one state. A badly run one, yes; one in which only one set of people have full rights, yes. But one state in the classical sense of control over borders and territory and the assertion of a monopoly on the legitimate use of force.

This is the case, whatever mirage Hamas and the PA think they are fighting over, whatever alternative reality Kurtzer thinks he is living in, whatever “process” Morris is seeing, or whatever “challenge” the think tankers have identified.

It is a reality Palestinians, first and foremost, need to confront now. They can start by not squabbling among themselves over a fantasy.