I wish you to bring these facts in front of Mr Hunt on behalf of Susan and myself, the Palestinian people who have no voice, and to reverse the ‘vortex of ever increasing violence in our world’.  Canterbury, NZ where I worked, and homicide with knives etc are symbolic.

HMGs of several colours have helped this descent towards hell.

It was last year that the centenary of the Balfour ‘Declaration’ was celebrated here, all 110 words – attached.  We will not discuss its legality nor morality, nor how Christ might have judged it.  Oppression of the native people was already well underway.  Ethnic cleansing reached a peak in Plan Dalet, in 1948, when about 100,000 Palestinians were slayed, and 800,000, two thirds of the population, were  driven by force of arms and terror (1 – an example Deir Yassin – no memorial there) from their homes and their land, and thus their living.  Most fled to Gaza, the resident population of which was 60,000.  Now 2 million – median age 17. 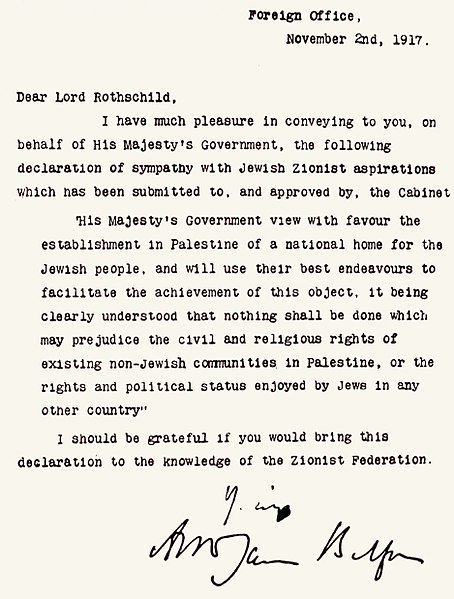 Statehood of the nascent ‘Israel’ depended on UN Resolution 194 (III)  (2) – …..“refugees wishing to return to their homes and live at peace with their neighbours should be permitted to do so at the earliest practicable date, …”.  Returning men were shot.  But the Jewish State as it is now called, was treated as a state, albeit a de facto one.  The latter fact is hardly ever mentioned.

What happened at Deir Yassin, and at least twenty other massacres then, has been repeated many times.  Those times include Qibya, Sabra and Shatila (several thousand killed by the ‘Christian’ Phalange whilst Sharon watched, and with the bellies of women slashed open), and the repeated killing, and the most cruel bombing and collective punishment of 2 million souls in Gaza.  I have been to Gaza 10 times. I know the people and I know their great suffering.  I have stood at the graves of over 3000, largely British soldiers, in the immaculately kept Commonwealth War grave in Gaza.  Many died in the ‘Second Battle of Gaza’ on the 2nd of November 1917. This was the day, ironically, that the ‘Declaration’ was made in Whitehall. (See this)

The most recent convulsion of evil has been the Great Return March that started a year ago.  A demonstration which has a sound legal basis and which has been pursued every Friday since without firearms.  In return snipers of the Israeli Occupation Force have treated these humans, often families, like a shooting gallery at a fair.  Their sniper rifles contain some of the millions of parts that the UK sends the oppressor.  (I believe I saw two British SAS men disembarking from an El Al plane at Ben Gurion airport in c. 2007.  I had been sitting close to them.  With their gun cases, I wondered if they were there to instruct in very accurate targeting.)  These IOF snipers have been ordered by the high command to kill and to maim.  The torso of a female paramedic aet 23, or the knees or hips of others destroyed, thus maiming for life.  I have been involved with one man who cannot walk due to a destroyed lateral tibial condyle.  He is stranded in Egypt having been refused a visa to enter Germany for an unwise operation.  One speck of the suffering.

HMG is shown to be bankrupt in law and morality since it has not intervened to stop these many crimes.  They are, in effect, British crimes both in history and complicity.   I omit many others.  Hypocrisy is all about.

Example – ” A UK government spokesman said the death of any child (the loss of Shamima Begum’s third baby) was “tragic and deeply distressing for the family”. As it was to the hundreds of dear children and their mothers who fleeing from the manufactured war in Syria drowned in the Mediterranean Sea. Or those that were blown apart or maimed by the ‘jihadis’ as ordered by Saudi Arabia and Qatar and its western slaves to money.

I demand, along with many others including senior doctors and surgeons, that HMG accepts the preliminary report (3) below, and the subsequent full report (Summary below).  It is the very least that HMG is bound to do.  Knife crime, and the rest, is part of the descent into hell.

Any man’s death diminishes me, because I am involved in Mankind; And therefore never send to know for whom the bell tolls; it tolls for thee. — John Donne

Submitted as a supplement to A/HRC/40/74, this text sets out the detailed findings of the independent international Commission of inquiry mandated to investigate the demonstrations that began in Gaza on 30 March, 2018, the response of Israeli security forces thereto, as well as the impact on civilians in Gaza and Israel.

The Commission found reasonable grounds to believe that during these weekly demonstrations, the Israeli Security Forces (ISF) killed and gravely injured civilians who were neither participating directly in hostilities nor posing an imminent threat to life. Among those shot were children, paramedics, journalists, and persons with disabilities. 183 people were shot dead, another 6,106 were wounded with live ammunition.

The demonstrations were organized by a ‘Higher National Committee,’ whose members came from all sectors of Palestinian society, including civil society, cultural and social organizations, students unions, women’s groups, eminent persons, members of clans and representatives of several political parties.

While the demonstrations were civilian in nature, bringing them under a law enforcement legal paradigm, they were at times violent, including throwing stones, cutting through the separation fence, and launching incendiary kites and balloons. The Commission found, however, that the use of lethal force in response was rarely necessary or proportionate. For lethal force to be permissible, the victim must pose an imminent threat to life or limb. The ISF violated international human rights law in most instances the Commission investigated.

ISF conduct also violated international humanitarian law, which permits civilians to be targeted only when they ‘directly participate in hostilities.’ This purposefully high threshold was not met by demonstrators’ conduct, in the view of the Commission, with one possible exception on 14 May.

The Commission found that twenty-nine people killed during demonstrations were members of organized armed groups, with another 18 of undetermined status. The Commission took the view, however, that is unlawful to shoot unarmed demonstrators based solely on their membership in an armed group, and not on their conduct at the time. It is equally unlawful to target them based on political affiliation.

1,576 people were wounded by bullet or bone shrapnel that resulted from ricochets, bullet fragmentation and shots going through one body into another – clearly illustrating the danger of firing high-velocity live ammunition into a crowd of demonstrators.

The Commission found that the content and the application of the Israeli forces’ rules of engagement contributed to the unlawful approach. The rules permitted status-based targeting in the legs of individuals deemed to be “key inciters/key rioters”, defined by conduct such as burning tyres, cutting or breaching the fence, exhorting/leading the crowd. Under these rules, 4,903 persons were shot in the lower limbs – many while standing hundreds of meters away from the snipers, unarmed.

Unless undertaken lawfully in self-defense, intentionally killing a civilian not directly participating in hostilities is a war crime. Serious human rights violations were committed which may amount to crimes against humanity.

The Commission also found that the Palestinian Authority and the Gaza de facto authorities bear responsibility for failing to uphold the right to peaceful assembly in connection with demonstrations policed by their respective security forces in June 2018.

Israel chose not to cooperate with the Commission.

David Halpin FRCS is a retired orthopaedic and trauma surgeon who yearns for peace and especially in Palestine. He has also spent much time, with a few others, pleading for an inquest on Dr David Kelly, which uniquely has never happened. The NHS is his other major concern. His woodlands that he planted give some peace.

One thought on “The Crimes against the People of Palestine: The British Government is “Shown to be Bankrupt in Law and Morality””