The editorial, “The World Is Close to Conquering Polio. Humans Are Holding Us Back,” started off naming the Official Oriental bad guys:

The world’s long and ambitious quest to conquer polio has come tantalizingly close to success, only to slip away because of unforgivable behavior by thugs and exponents of ignorance.

The “thugs” named by the Post are “hard-line Islamist forces,” fueled by nebulous “social media.” While no doubt Islamist forces and their ability to communicate amongst themselves contribute to the problem, the other party primarily responsible for the recent surge in anti-vax sentiment in Pakistan—the US Central Intelligence Agency—is notably unmentioned.

Reading the scolding editorial, one would never imagine that anti-polio efforts in Pakistan (as well as Afghanistan), according to numerous reports—including the New York Times(4/29/19) last month—have been severely undermined by the 2011 revelation (Guardian, 7/11/11) of a secret ruse cooked up by the CIA to use a hepatitis B vaccine drive to gather DNA in an effort to track the whereabouts of Osama bin Laden (efforts, it’s worth nothing, that didn’t actually help in finding bin Laden).

Not only did the vaccine drive have an ulterior motive, it wasn’t even a real vaccine drive. While the hepatitis vaccine doses themselves were real, the undercover CIA operators administering them did not return a month after the first dose to give the necessary second inoculation, rendering the whole process inert—meaning that the rural Pakistanis who were promised immunization were lied to, and left vulnerable to a life-threatening disease. 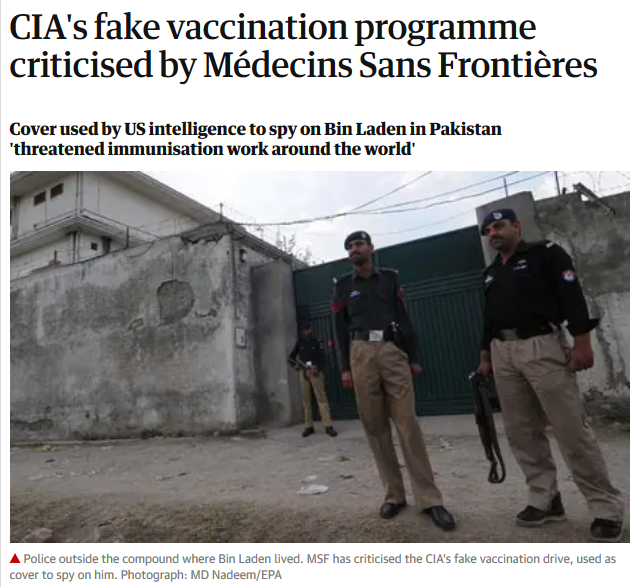 When the CIA’s vaccination ruse came to light, health workers accurately predicted the damage it would do to the cause of eradicating disease (Guardian, 7/14/11).

The risk is that vulnerable communities—anywhere—needing access to essential health services will understandably question the true motivation of medical workers and humanitarian aid….The potential consequence is that even basic healthcare, including vaccination, does not reach those who need it most.

Indeed, this is exactly what has happened. As the New York Times (4/29/19) reported last month:

The fact that the CIA used a vaccination team to track down Osama bin Laden in a Pakistani town in 2011 has helped fuel the resistance to vaccination campaigns in the country.

An earlier Washington Post report (3/4/19) from March about the rise of anti-vax sentiment in Pakistan, by Pamela Constable and Haq Nawaz Khan, also conspicuously failed to mention the CIA’s role in creating the crisis. Instead, the 1,150-word dispatch linked to an article that did mention it, but the hyperlinked text dismissed it as “tales of foreign plots,” without noting that it was a very real foreign plot that the Pentagon itself has admitted to.

It’s hard to comprehend the cognitive dissonance required to ignore the CIA using medical professionals as spies, thereby undoing decades of trust-building by international aid organizations in Pakistan, only to turn around and smugly finger-wag those subjected to the cynical ruse for being ignorant.

It’s the same arrogance that allowed Hollywood to give the 2013 Best Picture award to a film (very loosely based on a true story) about the CIA using fake filmmakers as spies in Iran, only to turn around in 2014 and produce a docudrama demonizing Iran for imprisoning an Iranian Canadian filmmaker who was accused of doubling as a spy. Is it not obvious that operations like the one celebrated in the former film provide rationalization for the all-too-real arrest dramatized in the latter one? Why don’t we ever talk about global trust-shattering the CIA engages in that gives this fake news rocket fuel, rather than act as if paranoia overseas emerges out of nowhere, or due to some innate native ignorance?

It’s common moral sense that to prevent future problems, one must have an accurate and true accounting of how these problems were created. The Washington Post would rather engage in power-flattering, vaguely Orientalist “oh dearism” than take on the CIA—a massive center of power that they could actually exert some influence over.

Could Congress pass a law banning spies from posing as medical professionals? Could they bar the use of journalistic cover as well (a tactic the Agency still reserves the right to use)? Could we address what the US and its intelligence agencies could do to prevent the sort of cynicism and fear that resulted from their 2010 DNA-gathering scheme? No, it’s far easier for the Post—itself long an ideological partner of the CIA—to just blame “fake news” and avoid any type of introspection at all.

Please tell the Washington Post to acknowledge the role of CIA subterfuge in fueling the anti-vaccination sentiment that has led to a resurgence of polio in Pakistan.

Please remember that respectful communication is the most effective.