Calamities are familiar to the people of Pakistan who have struggled through several catastrophic earthquakes, including those in 2005, 2013, and 2015 (to name the most damaging), as well as the horrendous floods of 2010. However, nothing could prepare the fifth most populated country in the world for this summer’s devastating events, which began with high temperatures and political chaos followed by unimaginable flooding.

END_OF_DOCUMENT_TOKEN_TO_BE_REPLACED

Politicians in Pakistan rise to power and fall from grace with alarming regularity, so much so that not a single prime minister has ever completed a full term in office. The one constant has been the genuine love and affection ordinary people have for the military. However, that could be about to change now that some inconvenient truths are beginning to surface in the increasingly clumsy attempts to silence Imran Khan.

END_OF_DOCUMENT_TOKEN_TO_BE_REPLACED

When the nation’s most popular leader in living memory is also the state’s public enemy number one, what will become of Pakistan?

END_OF_DOCUMENT_TOKEN_TO_BE_REPLACED

Imran Khan, a former cricket star who went into politics and became Prime Minister of Pakistan, had been ousted by bribing and threatening politicians of his coalition to turn against him. Khan had developed good relations with China and Russia and was against allowing the U.S. military to use Pakistan as a base for attacks in Afghanistan.

END_OF_DOCUMENT_TOKEN_TO_BE_REPLACED

“In Pakistan’s history, it may be the first time that people’s power has been honored by the judiciary in the face of open threats on the judges’ safety, including an attack on the chief justice. The lawless and powerful corrupt politicians did everything to derail the process of the rule of law, but justice prevailed. The U.S. government that initiated the current political crisis in Pakistan through its extremely unwise and self-destructive act of regime change in Pakistan has, hopefully, learned that it cannot impose corrupt and servile politicians on the 220 million people of Pakistan whose steady progress in the past three and a half years under the leadership of Imran Khan has been nullified by those incompetent and self-serving politicians that the U.S. installed in Pakistan. Pakistan now faces the challenge of going back to square one and re-starting its road to recovery. Congratulations to the people of Pakistan, to Pakistan’s Tehreek-e Insaaf Party (the Movement for Justice), and to the Party’s leader Imran Khan for this valiant and successful fight against foreign intervention and the powerful mafias.”

ISLAMABAD – Following weeks of high drama and controversy that have racked the nation, Imran Khan has been removed from office. The Pakistani prime minister suffered a vote of no confidence and a loss in the supreme court, ending his rule after less than four years. Coalition partners abandoned him, leaving his Pakistan Tehreek-e-Insaf (PTI) party in the minority.

END_OF_DOCUMENT_TOKEN_TO_BE_REPLACED

In the aftermath of the Modi government’s decision to remove ‘special status’ for J&K and bifurcate the state into two union territories, the most keenly awaited regional and international reaction — and a hugely consequential one — would be that of China’s, not the US’ or even of the other three P5 member states.

END_OF_DOCUMENT_TOKEN_TO_BE_REPLACED

Much is being said of US activities aimed at China. Recent protests in Hong Kong together with a US-led propaganda campaign aimed at Beijing’s attempts to quell a growing terrorist threat in Xinjiang are aimed at pressuring the nation to fall back into line within Washington’s enduring unipolar international order.

END_OF_DOCUMENT_TOKEN_TO_BE_REPLACED

Since 2004, the US government has attacked thousands of targets in tribal areas along the Afghan border in Northwest Pakistan. It used unmanned aerial vehicles operated by the US Air Force under the operational control of the CIA’s Special Activities Division. Attacks increased substantially under Bush’s successor, Nobel Peace Prize winner, Barack Obama.

END_OF_DOCUMENT_TOKEN_TO_BE_REPLACED

The promise was made in a letter to the deans of 12 public health schools – who have criticized the Obama administration for using a vaccination effort as a cover for reconnaissance – and was written by the president’s top counterterrorism and homeland security advisor, Lisa Monaco.

END_OF_DOCUMENT_TOKEN_TO_BE_REPLACED

Polio had been battled to near-extinction after decades of effort, but this year the WHO confirmed 68 new cases and declared it an international public health emergency. Nearly 80 percent of those cases are in Pakistan.

END_OF_DOCUMENT_TOKEN_TO_BE_REPLACED 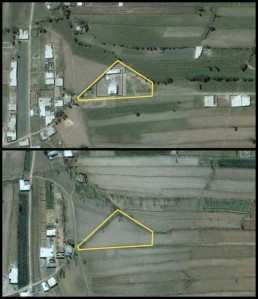 A before and after shot of the Abbottabad Compound, site of the Navy SEAL raid on Osama bin Laden. Adm. McRaven seems to be trying to erase the US records of the raid the same way Pakistan tried to erase the compound itself.

What could possibly compel the government to go out of its way to hide the official record on the most important raid in history? It’s hard to fathom, but a recent Associated Press article by Richard Larner shows that the Pentagon is doing just that by sending all its records on the Osama bin Laden raid to the CIA, effectively sealing them into the “FOIA black hole” of government secrecy, and it has Archive Director Tom Blanton wondering if we have a “shell game in place of open government.”

END_OF_DOCUMENT_TOKEN_TO_BE_REPLACED

In October 2011, 16-year-old Tariq Aziz attended a gathering in Islamabad where he was taught how to use a video camera so he could document the drones that were constantly circling over his Pakistani village, terrorizing and killing his family and neighbors. Two days later, when Aziz was driving with his 12-year-old cousin to a village near his home in Waziristan to pick up his aunt, his car was struck by a Hellfire missile. With the push of a button by a pilot at a US base thousands of miles away, both boys were instantly vaporized—only a few chunks of flesh remained.

END_OF_DOCUMENT_TOKEN_TO_BE_REPLACED

Sana Saleem: People are fed up with drone attacks and blame US policy for Afghan war

END_OF_DOCUMENT_TOKEN_TO_BE_REPLACED

ISLAMABAD: With the Russian threat to cut land routes for supply to NATO troops in Afghanistan, the Afghan battleground may turn into a cold death trap for NATO, defence analysts believe. They say that Pakistan should utilise the opportunity for a peaceful and prosperous Pakistan by pulling it out of the American war.