During the last days a right wing politician in Austria was taken down by using an elaborate sting. Until Friday Christian Strache was leader of the far right (but not fascist) Freedom Party of Austria (FPOe) and the Vice Chancellor of the country. On Friday morning two German papers, the Sueddeutsche Zeitung and Der Spiegel published (German) reports(English) about an old video that was made to take Strache down.

The FPOe has good connections with United Russia, the party of the Russian President Putin, and to other right-wing parties in east Europe. It’s pro-Russian position has led to verbal attacks on and defamation of the party from NATO supporting and neoliberal circles.

In July 2017 Strache and his right hand man Johann Gudenus, who is also the big number in the FPOe, get invited for dinner to a rented villa on Ibiza, the Spanish tourist island in the Mediterranean. They are told that the daughter of a Russian billionaire plans large investments in Austria. It was said that she would like to help his party. The alleged daughter of the Russian billionaire, who is actually also Austrian, and her “friend” serve an expensive dinner. Alcohol flows freely. The pair offers a large party donation but asks for returns in form of mark ups on public contracts.

Unknown to Strache the villa is professionally bugged with many hidden cameras and microphones. 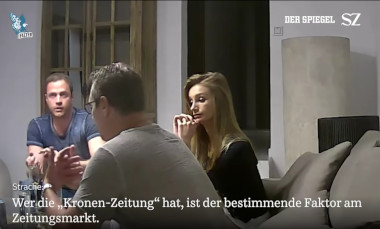 A scene from the video. Source: Der Falter (vid, German)

During the six hour long party several schemes get proposed by the “Russian” and are discussed. Strache rejects most of them. He insists several times that everything they plan or do must be legal and conform to the law. He says that a large donation could probably be funneled through an endowment that would then support his party. It is a gray area under Austrian party financing laws. They also discuss if the “Russian” could buy the Kronen Zeitung, Austria’s powerful tabloid, and use it to prop up his party.

The evening goes on with several bottles of Wodka on the table. Starche gets a bit drunk and boosts in front of the “oligarch daughter” about all his connections to rich and powerful people. He does not actually have these.

Strache says that, in exchange for help for his party, the “Russian” could get public contracts for highway building and repair. Currently most of such contracts in Austria go to the large Austrian company, STRABAG, that is owned by a neoliberal billionaire who opposes the FPOe. At that time Strache was not yet in the government and had no way to decide about such contracts.

At one point Strache seems to understand that the whole thing is a setup. But his right hand man calms him down and vouches for the “Russian”. The sting ends with Strache and his companion leaving the place. The never again see the “Russian” and her co-plotter. Nothing they talked about will ever come to fruition.

Three month later Strache and his party win more than 20% in the Austrian election and form a coalition government with the conservative party OeVP led by Chancellor Sebastian Kurz. Even while the FPOe controls several ministries, it does not achieve much politically. It lacks a real program and the government’s policies are mostly run by the conservatives.

Nearly two years after the evening on Ibiza, ten days before the European parliament election in which Strache’s party is predicted to achieve good results, a video of the evening on Ibiza is handed to two German papers which are known to be have strong transatlanticist leanings and have previously been used for other shady ‘leaks’. The papers do not hesitate to take part in the plot and publish extensive reports about the video.

After the reports appear Strache immediately steps down and the conservatives end the coalition with his party. Austria will now have new elections.

On Bloomberg Leonid Bershidsky opines on the case:

Strache’s discussion with the Russian oligarch’s fake niece shows a propensity for dirty dealing that has nothing to do with idealistic nationalism. Nationalist populists often agitate against entrenched, corrupt elites and pledge to drain various swamps. In the videos, however, Strache and Gudenus behave like true swamp creatures, savoring rumors of drug and sex scandals in Austrian politics and discussing how to create an authoritarian media machine like Hungarian Prime Minister Viktor Orban’s.

I do not believe that the people who voted for the FPOe (and similar parties in other countries) will subscribe to that view. The politics of the main stream parties in Austria have for decades been notoriously corrupt. Compared to them Strache and his party are astonishingly clean. In the video he insists several times that everything must stay within the legal realm. Whenever the “Russian” puts forward a likely illegal scheme, Starche emphatically rejects it.

Strache, as one of the few nationalist populists in government in the European Union’s wealthier member states, was an important member of the movement Italian Interior Minister Matteo Salvini has been trying to cobble together ahead of the European Parliament election that will take place next week. On Saturday, he was supposed to attend a Salvini-led rally in Milan with other like-minded politicians from across Europe. Instead, he was in Vienna apologizing to his wife and to Kurz and protesting pitifully that he’d been the victim of a “political assassination” — a poisonous rain on the Italian right-winger’s parade.
…
This leaves the European far right in disarray and plays into the hands of centrist and leftist forces ahead of next week’s election. Salvini’s unifying effort has been thoroughly undermined, …

This is also a misreading of the case. The right-wing parties will use the case to boost their legitimacy.

Strache was obviously set up by some intelligence services, probably the German one, with the aim to either blackmail him, or to politically assassinate him when convenient as it now seems to have been. During the meeting on Ibiza Strache promised and did nothing illegal. Looking for potential support for his party is not a sin. Neither is discussing investments in Austria with a “daughter of a Russian oligarch.” Some boosting while drunk is hardly a reason to go to jail. The video was thereby insufficient for blackmailing him.

That Strache stepped down after the sudden media assault only makes him more convincing. The right-wing all over Europe will see him as a martyr who was assassinated because he worked for their cause. The issue will increase the right-wingers hate against the ‘liberal’ establishment. It will further motivate them: “They attack us because we are right and winning.” The new far-right block Natteo Salvini will setupin the European Parliament will likely receive a record share of votes.

Establishment writers notoriously misinterprate the new right wing parties and their followers. This stand-offish sentence in the Spiegelstory about Strache’s party demonstrates the problem:

In the last election, the party drew significant support from the working class, in part because of his ability to simplify even the most complicated of issues and play the common man, even in his role as vice chancellor.

The implicit thesis, that the working class is too dumb to understand the “most complicated of issues”, is not only incredibly snobbish but utterly false. The working class understands very well what the establishment parties have done and are doing to them. The increasing vote share of the far-right is a direct consequence of the behavior of the neoliberal center and of the lack of real left alternatives.

Last week, before the Strache case appeared, Craig Murray put the finger on the wound:

The massive economic shock following the banking collapse of 2007–8 is the direct cause of the crisis of confidence which is affecting almost all the institutions of western representative democracy. The banking collapse was not a natural event, like a tsunami. It was a direct result of man-made systems and artifices which permitted wealth to be generated and hoarded primarily through multiple financial transactions rather than by the actual production and sale of concrete goods, and which then disproportionately funnelled wealth to those engaged in the mechanics of the transactions.
…
The rejection of the political class manifests itself in different ways and has been diverted down a number of entirely blind alleys giving unfulfilled promise of a fresh start – Brexit, Trump, Macron. As the vote share of the established political parties – and public engagement with established political institutions – falls everywhere, the chattering classes deride the political symptoms of status quo rejection by the people as “populism”. It is not populism to make sophisticated arguments that undermine the received political wisdom and take on the entire weight of established media opinion.

If one wants to take down the far right one has to do so with arguments and good politics for the working class. Most people, especially working class people, have a strong sense for justice. The political assassination of Christian Strache is unjust. What was done during the 2007-8 banking crisis was utterly corrupt and also unjust. Instead of going to jail the bankers were rewarded with extreme amounts of money for their assault on the well being of the people. The public was then told that it must starve through austerity to make up for the loss of money.

While I consider myself to be a strong leftist who opposes the right wherever possible, I believe to understand why people vote for Strache’s FBOe and similar parties. When one talks to these people issues of injustice and inequality always come up. The ‘populist’ parties at least claim to fight against the injustice done to the common men. Unlike most of the establishment parties they seem to be still mostly clean and not yet corrupted.

In the early 1990s Strache actually flirted with violent fascists but he rejected their way. While he has far-right opinions, he and his like are no danger to our societies. If we can not accept that Strache and his followers have some legitimate causes, we will soon find us confronted with way more extreme people. The neoliberal establishment seems to do its best to achieve that.