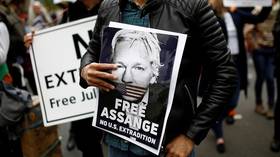 In a handwritten letter from Belmarsh prison, WikiLeaks co-founder Julian Assange says he is being denied a chance to defend himself and that elements in the US that “hate truth, liberty and justice” want him extradited and dead.

The letter was sent to independent British journalist Gordon Dimmack. It was dated May 13 – ten days before the US announced 17 additional charges under the Espionage Act against the jailed whistleblower.

In light of the new indictment, Dimmack read out the letter in a YouTube video. A photo of the handwritten note was soon posted onlineas well.

I received a letter from Julian #Assangehttps://t.co/ckRfg3ngOp via @YouTube

“I have been isolated from all ability to prepare to defend myself: no laptop, no internet, ever, no computer, no library, so far, but even if I get access it will just be for a half an hour, with everyone else, once a week,” Assange wrote. “The other side? A superpower that has been preparing for 9 years, with hundreds of people and untold millions spent on the case.”

Assange was arrested on April 11, after Ecuador revoked his political asylum and UK police seized him from the Latin American country’s embassy in London. He was sentenced to 50 weeks behind bars for skipping bail, and sent to Belmarsh, a prison south of London once dubbed ‘British Guantanamo’ for being used to jail terrorism suspects.

“I am unbroken, albeit literally surrounded by murderers, but, the days where I could read and speak and organize to defend myself, my ideals, and my people are over until I am free! Everyone else must take my place,” Assange wrote in the letter.

Also on rt.com WATCH: ‘British Gitmo’ jail where Julian Assange is being held The WikiLeaks publisher had sought refuge in Ecuador in 2012, claiming – correctly, as it turned out – that trumped-up charges in Sweden would be used to get him extradited to the US. A secret indictment of Assange, only made public in March, charged him with violating the Espionage Act over the 2010 publication of secret US military and diplomatic documents.

“The US government, or rather, those regrettable elements in it that hate truth, liberty and justice, want to cheat their way into my extradition and death, rather than letting the public hear the truth, for which I have won the highest awards in journalism and have been nominated 7 times for the Nobel Peace Prize,” Assange wrote.

Truth, ultimately, is all we have.

The new charges against Assange have alarmed even the mainstream media outlets that have spent years pouring vitriol on WikiLeaks, as they began to realize his prosecution along those lines would essentially criminalize all journalism. However, because Assange and WikiLeaks have been demonized by advocates of the Russiagate conspiracy theory as “agents of the Kremlin” and spies, media pushback against the charges has been muted at best.

One thought on “‘Everyone else must take my place’: Assange in letter from British prison”