And I’m not looking to hurt Iran at all.

I’m looking to have Iran say, “No nuclear weapons.”

And I think we’ll make a deal.

Iran said: “No nuclear weapons.” It said that several times. It continues to say that.

But Trump may be confused because the U.S. ‘paper of the record’, the New York Times, recently again began to falsely assert that Iran has such a program.

A May 4 editorial in the Times claimed that Iran’s Revolutionary Guard Corps was running such a nuclear weapons program. After a loud public outrage the Times corrected the editorial. Iran’s UN office wrote a letter to the Times which was published on May 6:

In an early version of “Trump Dials Up the Pressure on Iran” (editorial, nytimes.com, May 4), now corrected, you referred to a nuclear weapons program in describing the reach of the Islamic Revolutionary Guards Corps.

The editorial is correct in criticizing the punishing aspects of the Trump administration policy toward Iran — one that has brought only suffering to the Iranian people and one that will not result in any change in Iran’s policies. But it was wrong to refer to a weapons program — a dangerous assertion that could lead to a great misunderstanding among the public.

Unfortunately that did not help. The NYT continues with the “dangerous assertion”.

On May 13 the NYT reporters Eric Schmitt and Julian E. Barnes wrote in White House Reviews Military Plans Against Iran, in Echoes of Iraq War:

One can not accelerate one’s car, if one does not have one. The phrase “accelerate work on nuclear weapons” implies that Iran has a nuclear weapons program. It may that the White House falsely claimed that but the authors use the phrase and never debunk it.

A May 14 NYT piece by Helene Cooper and Edward Wong repeats the false claim without pointing out that it is wrong:

The Trump administration is looking at plans to send as many as 120,000 troops to the Middle East should Iran attack American forces or accelerate work on nuclear weapons, The New York Times reported.

Also on May 14 the NYT‘s editorial cartoon was published under the caption Will Iran Revive Its Nuclear Program? The caption of the orientalist cartoon falsely asserted that Iran had enriched Uranium to weapons grade. And no, Iran does not have a nuclear weapon or a nuclear weapons program in its freezer. 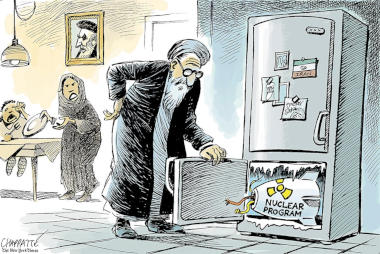 On May 16, after another public outcry, a correction was added to the cartoon:

An earlier version of a caption with this cartoon erroneously attributed a distinction to Iran’s nuclear program. Iran has not produced highly enriched uranium.

Under White House plans revised after pressure from hard-liners led by John R. Bolton, the president’s national security adviser, if Iran were to accelerate work on nuclear weapons, defense officials envision sending as many as 120,000 troops to the Middle East.

Iran does not have a nuclear program. It can not “accelerate” one. The U.S. claims that Iran once had such a program but also says that it was ended in 2003.

The standard formulation that Reuters uses in its Iran reporting is thereby appropriate:

The United States and the U.N. nuclear watchdog believe Iran had a nuclear weapons program that it abandoned. Tehran denies ever having had one.

On July 1 1968 Iran signed and later ratified the Treaty on the Non-Proliferation of Nuclear Weapons (NPT) as a non-nuclear-weapon party. Article II of the treaty says:

With that Iran said “No nuclear weapons”. Iran also accepted the nuclear safeguards demand in Article III of the treaty in form of routine inspections by the treaty’s nuclear watchdog organization IAEA.

Article IV of the NPT gives all non-nuclear-weapon state parties like Iran the “inalienable right” to “develop research, production and use of nuclear energy for peaceful purposes without discrimination.” After signing the NPT Iran launched several civil nuclear projects. These started under the Shah in 1970s and continued after the 1979 revolution in Iran. 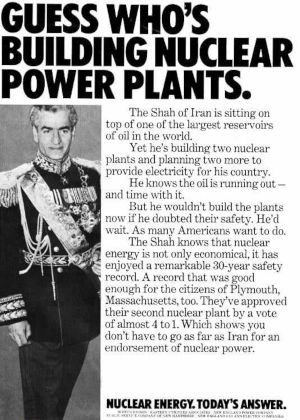 Ever since the Iranian revolution the U.S. expressed explicit hostility to the Islamic Republic of Iran. It instigated the President Saddam Hussein of Iraq to launch a war against the Islamic Republic and actively supported him throughout. It attempted and continues to attempt to hobble Iran’s development, nuclear and non-nuclear, by all possible means.

Under U.S. President George W. Bush the U.S. government claimed that Iran had a nuclear weapons program. The Islamic Republic Iran rejected that claim and in 2004 signed the Additional Protocol to the NPT which allows the IAEA to do more rigorous, short-notice inspections at declared and undeclared nuclear facilities to look for secret nuclear activities.

With that the Islamic Republic of Iran said: “No nuclear weapons”.

In a 2006 New York Times op-ed Javid Zarif, then the Iranian Ambassador to the United Nations, wrote:

Ayatollah Ali Khamenei, the leader of the Islamic Republic, has issued a decree against the development, production, stockpiling and use of nuclear weapons.

With that Iran’s highest political and religious leader said: “No nuclear weapons”.

Not only did Iran sign the NPT and its Additional Protocol but its political leadership outright rejects the development and ownership of nuclear weapons.

Zarif also pointed out that the IAEA found that Iran had missed to declare some nuclear activities but also confirmed that it never had the nuclear weapons program the Bush administration claimed it had:

In November 2003, for example, the agency confirmed that “to date, there is no evidence that the previously undeclared nuclear material and activities were related to a nuclear weapons program.”

During the “previously undeclared nuclear material and activities” which the IAEA investigated, some Iranian scientists worked on a ‘plan for a plan’ towards nuclear weapons. They seem to have discussed what steps Iran would have to take, what materials, and what kind of organization it would need to launch a nuclear weapons program. The work was not officially sanctioned and no actual nuclear weapons program was ever launched. It is believed that the Iranian scientists worked on a ‘plan for a plan’ because they were concerned that Iran’s then arch enemy Saddam Hussein, who had bombarded Iranian cities with chemical weapons, was working towards nuclear weapons. In 2003, after the U.S. invaded Iraq, that concern proved to be unfounded and the ‘plan for a plan’ project was shut down.

In December 2007 all 16 U.S. intelligence agencies confirmed the shut down:

A new assessment by American intelligence agencies concludes that Iran halted its nuclear weapons program in 2003 and that the program remains frozen, contradicting judgment two years ago that Tehran was working relentlessly toward building a nuclear bomb.

[T]he new [National Intelligence Estimate] declares with “high confidence” that a military-run Iranian program intended to transform that raw material into a nuclear weapon has been shut down since 2003, and also says with high confidence that the halt “was directed primarily in response to increasing international scrutiny and pressure.”

The National Intelligence Estimate ended efforts by the Bush administration to threaten Iran with war. But the U.S. government, under Bush and then under President Obama, continued its effort to deny Iran its “inalienable right” to civil nuclear programs.

Obama waged a campaign of ever increasing sanctions on Iran. But the country did not give in. It countered by accelerating its civil nuclear programs. It enriched more Uranium to civil use levels and developed more efficiant enrichment centrifuges. It was the Obama administration that finally gave up on its escalatory course. It conceded that Iran has the “inalienable right” to run its civil nuclear programs including Uranium enrichment. It was this concession, not the sanctions, that brought Iran to the table for talks about its nuclear programs.

The result of those talks was the The Joint Comprehensive Plan of Action (JCPOA) which was endorsed by UN Security Council Resolution 2231, adopted on July 20, 2015.

The JCPOA gives the IAEA additional tools to inspect facilities in Iran. It restricts Iran’s civil nuclear program to certain limits which will terminate in October 2025. The JCPOA also reaffirms that Iran has full rights under the NPT. The IAEA since regularly inspects facilities in Iran and consistently reaffirms in its reports that Iran has no nuclear weapons program.

The Trump administrations hostility to Iran has nothing to do with anything nuclear. The U.S. wants hegemony over the Persian Gulf region. Iran rejects such imperial desires. The U.S. wants to control the flow of hydrocarbon resources to its competitors, primarily China. Iran does not allow such controls over its exports. The U.S. wants that all hydrocarbon sales are made in U.S. dollars. Iran demands payments in other currencies. Israel, which has significant influence within the Trump administration, uses claims of a non existing Iranian nuclear weapons program to manipulate the U.S. public and to divert from its racist apartheid policies in Palestine.

Trump’s talk – “I’m looking to have Iran say, “No nuclear weapons.”” – is simply bullshit. Iran said so several times and continues to say so. But Trump obviously believes that he can get away with making such idiotic claims.

The New York Times proves him right. It is again slipping into the role that it played during the propaganda run-up to the war on Iraq in 2002/2003. False claims made by members of the Bush administration about weapons of mass destruction in Iraq were reported by the Times as true, even while diligent reporters at other outlets debunked those claims again and again. The Times later apologized and fired Judith Miller, one of its reporters who wrote several of the pieces that supported the false claims.

But it was never a problem of one reporter who channeled false claims by anonymous administration officials into her reports. It was the editorial decision by the Times, taken long before the war on Iraq began, to use its power to support such a war. That editorial decision made it possible that those false claims appeared in the paper.

This month alone one NYT editorial, one editorial cartoon and at least five reporters in three pieces published in the New York Times made false claims about an Iranian nuclear weapons program that, as all the relevant official institutions confirm, does not exist. This does not happen by chance.

It it is now obvious that the Times again decided to support false claims by an administration that is pushing the U.S. towards another war in the Middle East.