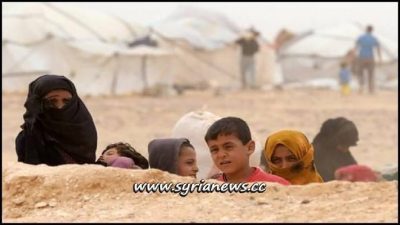 American forces occupying Syrian territory entered the country illegally and their presence impedes efforts to restore peaceful life to the country and constitutes an obstacle to stability in southeastern Syria and causing the catastrophic conditions of the residents of al-Rukban camp who are being forcibly detained by terrorist groups controlled by the United States.

A statement by the Syrian and Russian coordinating bodies on the return of the displaced Syrians.

The statement issued by the two bodies indicated that the information of the Syrian Arab Red Crescent doctors who examined people who came out of the camp shows that they have chronic diseases, some of them suffering from tuberculosis and skin diseases, while many are underweight due to hunger and in children lack of vitamins and intestinal infections and viral infection.

The statement pointed out that Syria and Russia are taking unprecedented measures to save the inhabitants of Al-Rukban, which led to the departure of 13337 people since March 23, 2019 from the camp where tens of thousands of displaced people live in catastrophic conditions and many of them do not have money to pay to terrorists in the camp to allow them to leave the camp.

Tens of thousands of Syrians who fled their homes in towns and villages, mainly in Eastern Homs countryside, upon the expansion of the US-sponsored ISIS terrorists were pushed towards the southeast of the country instead of towards the capital Damascus to their southwest.

Magahaweer Al-Thawra, among other terrorist groups, led those civilians into a makeshift supposed to be refugee camp in Al-Tanf area near the borders of Jordan and Iraq deep in the open desert. It was a trap to hold them in a very remote area and under the cover of the US-led coalition of aggressor states defying international law and against everything humanity represents. Since then, the ISIS-affiliates Maghaweer Al-Thawra under the US protection kept the civilians in dire conditions under their mercy in what’s now described as Rukban Concentration Camp in order to pressure the Syrian state into concessions.

Featured image is from Syria News