Climate change is an existential threat to human civilization. If only corporate media acted like it.

While the majority of corporate media do not outright deny the reality of the human-caused climate crisis, they are filled with another brand of insidious ideologues that I call climate minimizers. These downplay the threat that climate change poses to all of us by ignoring scientific data, avoiding discussion on the actual impact of climate change, and hyper-focusing on trivial details.

These tendencies were on display in the corporate media response to presidential candidate Bernie Sanders’ climate change plan. The Washington Post published at least three opinion pieces on the plan that focused on the political horse race:

Strangely enough, the Post did publish an editorial by Reaganite Hugh Hewitt (8/23/19) that seemed to grasp the most important point: “If you really think the world is on the edge of catastrophe, are you going to waste your vote on a pretend climate-change ‘policy,’ or go all in with Sanders?” 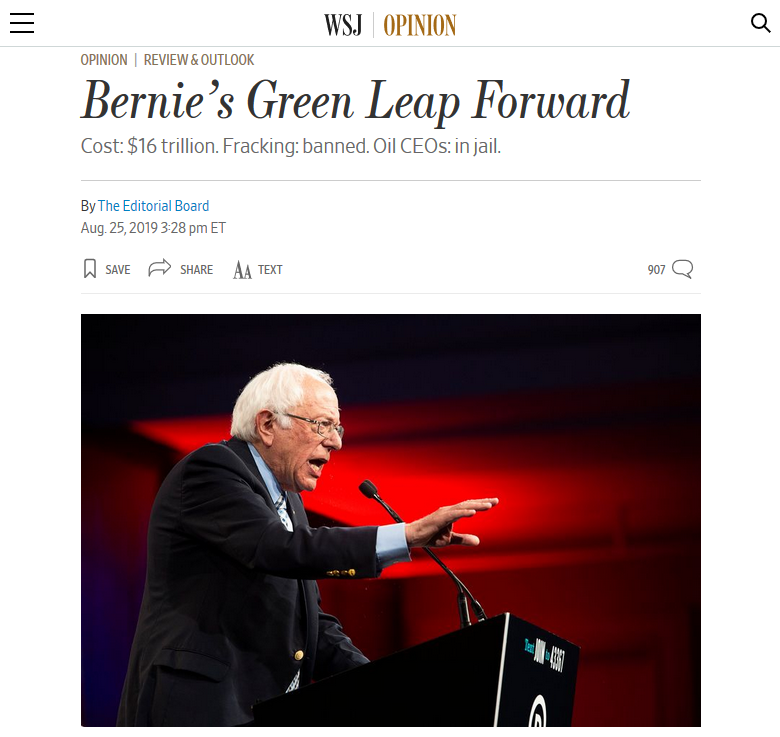 The Wall Street Journal editorial board, which previously endorsed Jair Bolsonaro (10/8/18) despite the threat he poses to the Amazon, penned a condescending editorial (8/25/19) filled with scare quotes and red-baiting that extended to the headline, “Bernie’s Green Leap Forward,” a clear allusion to Mao.

CNN (8/27/19) published an analysis by Ronald Brownstein, headlined “Bernie Sanders’ New Climate Plan Asks Democrats: Do You Want a Revolution or Not?

Many of these pieces perpetuated the same myths about climate change, either explicitly or implicitly.

Myth 1: Climate Change Is Not an Existential Threat

Since the Paris agreement, however, new data has come to light to show that a warming of 1.5°C  can have catastrophic consequences for the planet. We risk large-scale melting of Arctic sea ice and the West Antarctic ice cap. It will also do unprecedented damage to coral reefs. The most recent UN report projects a 1.5°C  warming could lead to the loss of many Pacific islands. At least 6% of insects, 8% of plants and 4% of vertebrates are projected to lose over half their habitat, which would lead to mass extinction.

If the global temperature warms by 2°C, we face an unprecedented climate catastrophe—and delaying net-zero emissions to 2050 will mean a 3°C rise in temperatures. The emeritus director of the Potsdam Institute, Hans Joachim Schellnhuber, points out that the consequences for our planet would be dire:

Here is a very big risk that we will just end our civilization. The human species will survive somehow, but we will destroy almost everything we have built up over the last 2,000 years.

Numerous studies have shown that in order for climate change to be arrested at 1.5°C, we need to reach net-zero emissions by 2030.

Many editorials on climate change did not even consider this point. CNN’s editorial had a section headed “Is 2030 Too Soon?” If one examines any of the bodies of available research, however, it’s clear that 2030 is almost too late.

Myth 2: The Cost of Action Is Too High

In alarming uniformity, many of the pieces had the same trite opening:

Although they accurately describe the cost of Sanders’ program, none of the editorials attempt to educate people about the differences between Sanders and Biden’s plans. And, of course, they completely avoid discussing the actual effects of climate change as laid out in the 2018 IPCC UN report.

Sanders’ plan calls for “reaching 100 percent renewable energy for electricity and transportation by no later than 2030 and complete decarbonization by 2050 at latest.” Joe Biden’s climate plan, in contrast, would “ensure the US achieves a 100% clean energy economy and reaches net-zero emissions no later than 2050.”

They may sound similar to the layperson, but in climate change terms, their plans are vastly different. Net-zero emissions (or carbon neutrality) means that for every ton of anthropogenic CO2 emitted there is an equivalent offset of CO2 removed from the atmosphere. Carbon neutrality does not imply the discontinuation of fossil fuels.  Full decarbonization means zero unabated CO2 emissions—that is, without capturing carbon for storage—from energy generation and industrial processes. 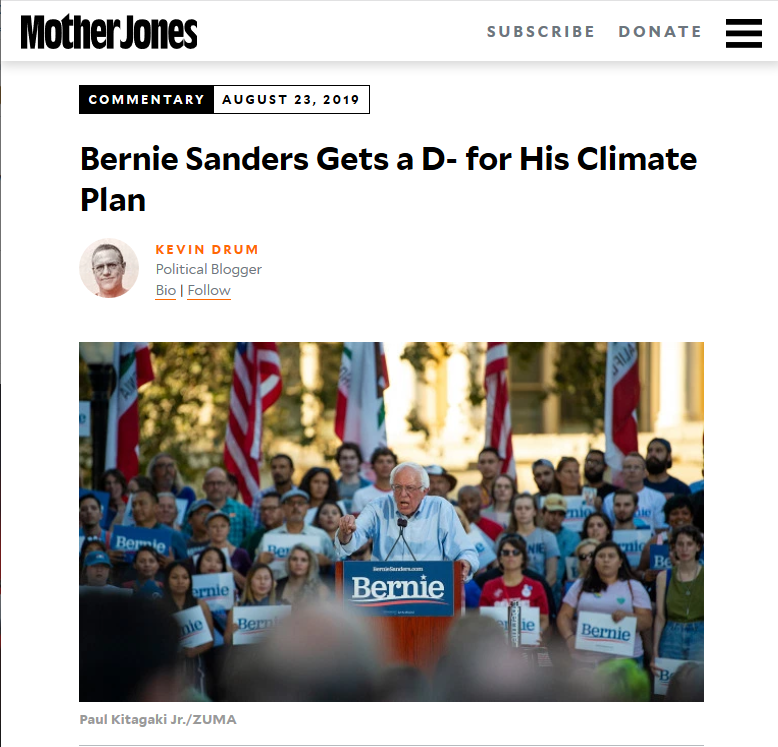 Mother Jones‘ Kevin Drum (8/23/19) denounces the Sanders climate plan because it would “tax the rich” and “hobble the fossil fuel industry.”

According to estimates by multiple organizations, if we reach net-zero emissions by 2050, the temperature of the earth will likely warm to 3°C, which could be a civilization-ending event.  However, if we manage to achieve carbon neutrality by 2030, we are likely to arrest climate change at 1.5°C.

None of these critiques mention the fact that Biden’s plan may not be enough to save human civilization. Worse, Mother Jones (8/23/19, 8/24/19) gave Biden’s plan a higher grade!

So Sanders has proposed what the rhetoric of climate-change apocalypse demands: All hands on deck, and damn the torpedoes, provided you don’t use any fossil fuels in mounting your charge.

Another point in regards to the concern-trolling about cost is that the plan will be paid for over 15 years—making the annual cost closer to $1 trillion. Nor do the critiques compare the cost of climate action to the damages from doing nothing, which Sanders estimates at $34.5 trillion by the end of this century. Outlets failed to put the climate plan’s cost in context by comparing it to the scale of the response to other, less serious crises, such as the $29 trillion bailout given to Wall Street after the 2007–08 financial crisis. 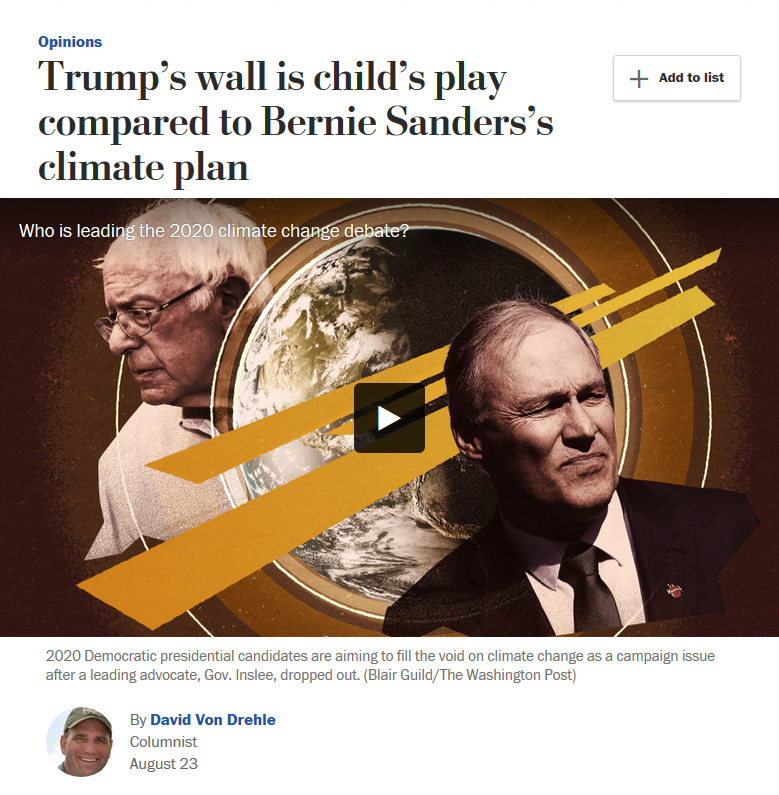 The Washington Post‘s David Von Drehle (8/23/19) attacks the “risible fantasy” of trying to halt global warming before it threatens to end civilization.

Von Drehle in the Post (8/23/19) mused sarcastically about whether Sanders’ proposals are logistically possible:

Sanders will replace or scrap all aircraft, the vast majority of cars and trucks, most buses, trains and ships; hundreds of power plants; and much of the electrical grid—which is what he would have to do to reach his promised “100 percent renewable energy for electricity and transportation.” And he will do this by 2030. That’s 10 years. Boston’s Big Dig took 20.

The logistics of achieving carbon-neutrality by 2030 are actually not so complicated. Currently, the power generation sector emits 1.8 million metric tons of greenhouse gases, or nearly 33% of our emissions. According to experts, it takes approximately six years to construct a large-scale solar plant, while utility-scale wind operations can be installed within a year.

The transportation sector emits the second-largest source of greenhouse gases.  However, vehicle companies have already been selling 100% electric vehicles. Therefore, setting energy standards, not unlike what they are currently subject to, can speed up the transition. On top of that, giving financial incentives to people to trade-in their gas-guzzlers for cleaner energy will accelerate that process.

While the Journal and the Post’s editorial team seem to have an inherent bias against trains, high-speed rails are significantly more energy-efficient than cars or planes. Compared to planes or cars, high-speed rails can reduce carbon emissions by 80%.

The most important point about the logistical concerns is that none of this is new technology. Wind energy has already been used successfully; solar energy powers a significant portion of the world; grants to weatherize homes and upgrade automobiles have already been implemented in Australia; and high-speed rails have been touted for their comfort and ease of use.  The only missing ingredient is political will.

While it is true that the entire Republican Party will not vote for this, and probably a good majority of the Democratic Party is also opposed to these measures, this seems more like a self-indictment of corporate media.

When the UN-IPCC released the climate report cited here, only 22 of the 50 biggest newspapersin the United States covered it. North America had the least amount of media coverage on this issue. If corporate media were serious in their coverage of climate change, and perhaps if they didn’t platform avid climate-change deniers, voters could make more informed choices about whom they want to represent them in Congress.

The Fuchs/Scherer Post article (8/22/19) quoted Christy Goldfuss, a scholar at the Center for American Progress who worked on climate policy in the Obama White House:

CNN (8/27/19) likewise consulted Paul Starr, a Princeton University sociologist and co-founder of the American Prospect, who speculated: “This is not what the country needs or is likely to support.”

Instead of consulting obviously conflicted think tank experts to speculate about hypotheticals, these pieces could have looked at the polls: 69% of registered voters, including 44% of Republican voters would support the Green New Deal, according to a recent study by Yale University.

Myth 6:  This Proposal Is Government Tyranny 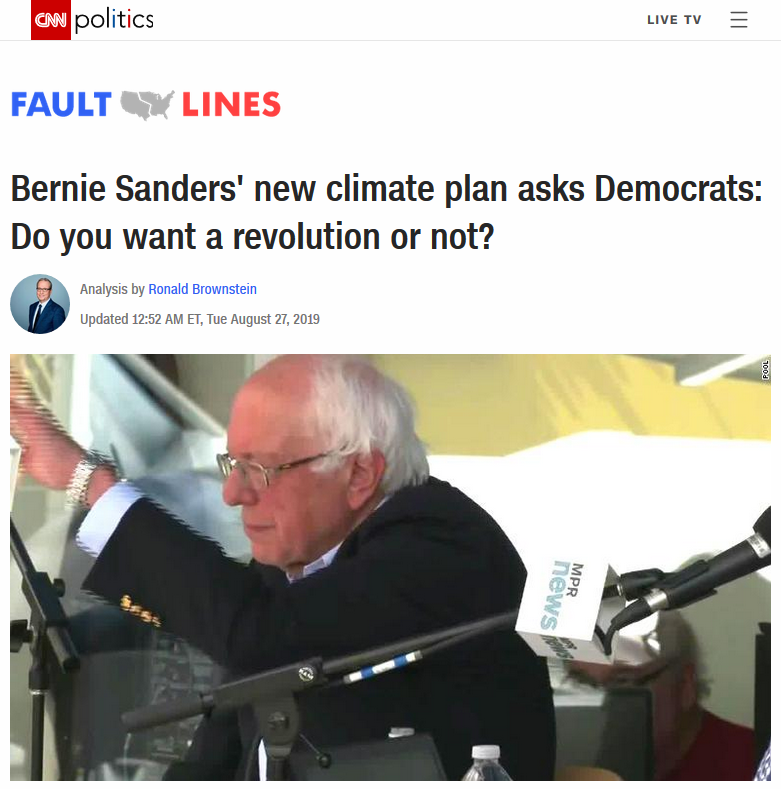 CNN (8/27/19) says the “most fundamental question” about Sanders’ climate plan is its “shifting control away from the private sector.”

Many of these editorials seem to imply that it is not the role of the federal government to drive our energy policy. They also seem to think that the American people have some kind of deep fondness for for-profit energy companies.  CNN’s Brownstein (8/27/19) asserted:

The most fundamental question the Sanders plan poses, though, may not be technological. Instead, the key question is a political one: Will Americans accept as large a role for the federal government as he envisions?

The Post’s Von Drehle (8/23/19) stated, “Let’s make room for some ideas that don’t assume the next president will have dictatorial powers and a grove of money trees,” while the Post’s editorial board (8/25/19) insisted:

No central planner can know exactly how and where to invest for an efficient and effective energy transition… We do not know, precisely, what the most efficient path looks like. We are also certain that Mr. Sanders does not.

They are ignoring the fact that the president already has frightening, unchecked authority. For example, the president can drone a US citizen with impunity. It seems ridiculous to suggest that setting vehicle-fuel efficiency standards or building more power plants is more tyrannical than the current powers the president possesses, up to and including the ability to launch a nuclear war.

Ultimately, all these editorials engage in the same kind of climate minimization. They put their ideology first, and then hope that reality will conform to their ideology, which is precisely the wrong way to judge a climate plan. Instead, one must first consider the best scientific data, and measure the actions proposed against the requirements to avoid climate disaster. Reality cannot be retrofitted to accommodate the media’s neoliberal ideology.