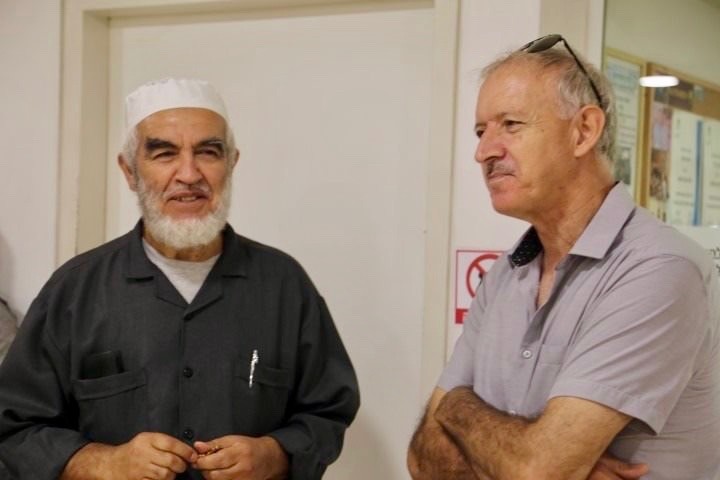 Ameer Makhoul, right, seen with Raed Salah, a community leader among Palestinians in Israel, at a court in Haifa in August. (via Facebook)

After corresponding with Makhoul during his nine years in prison, I spoke with him recently via Skype, for his first interview since his release.

“I discovered when I left the prison that freedom doesn’t mean to leave the gates of prison,” he says now. “The first thing I looked at was the sky, to see the clouds, which I didn’t see for nine years.”

Freedom, he adds, is to be back in his community with his people and his family.

“I feel freedom even more with people like you and the solidarity groups who accompanied me on my way to freedom.”

But he is not entirely free. Last month, Israel’s Shin Bet secret police summoned Makhoul to warn him that it will keep an eye on him.

Makhoul was director of Ittijah, a network of Palestinian organizations in Israel.

Facing the potential of life in prison for supposed “security” offenses, Makhoul accepted a plea deal after a coerced confession.

Solidarity organizations around the world considered him a prisoner of conscience.

I first met Makhoul 15 years ago when he organized a visit to Palestinian Bedouin villages in the southern Naqab region that are unrecognized by Israel.

A few months before his arrest I interviewed him. He told me then that the Palestinian community in Israel “is at risk because of the systematic, colonial, racist practices and policies of Israel.”

The wall blocks the horizon

Ironically, being in Israeli prison with young Palestinians from all over historic Palestine – the West Bank, including Jerusalem, Gaza and present-day Israel – as well as from the occupied Golan Heights, helped Makhoul see things more clearly.

He understood the profound fragmentation caused by Israel’s policy of separating Palestinians, especially its construction of the wall in the occupied West Bank.

The wall “came inside the people,” he says.

“Their political and personal horizon became smaller and even their dreams are smaller.”

“Everyone is speaking about his own neighborhood, his own city, his own refugee camp,” seeing them as a “mini homeland,” not a temporary shelter “until return to his own town.”

“A whole generation of Palestinians does not know the sea, does not know how to swim,” he says, underlining how many are cut off from the coast.

Makhoul also found a lot of misconceptions about Palestinian citizens of Israel – the approximately 1.5 million Palestinians who survived the 1948 Nakba and their descendants.

They are nominally Israeli citizens who vote in Israeli elections, but they have always faced systematic racism and violence, including dozens of Israeli laws that discriminate against them because they are not Jewish.

Among fellow prisoners Makhoul found assumptions that Palestinians living in Israel have money, and negative perceptions about them included that “the girls are impolite.”

But he also found that discussions changed perceptions and made many realize “how small their world had become.”

Makhoul thinks all of this is the intended product of Israeli policy.

“One of the lessons is that we sometimes could not see the hands of Israel. We saw that one voice came from the prison authority, separately from the military, the checkpoints, the Shin Bet or the judge,” he observes.

“But in fact it is one system with many hands.”

“The Israeli intelligence system is all the time busy to learn from us, to study us,” Makhoul says. The goal is control and “how to recreate a new Palestinian generation and way of thinking.”

Israel doesn’t want Palestinians to see the big picture, according to Makhoul, “But prison was for me the panorama to see what has happened to the Palestinians.”

Family members outside the walls lose their freedom too when a loved one is in prison.

“Their mind, their worries, their thinking, their heads are also in prison,” Makhoul says.

He could only appreciate the full impact on his wife Janan Abdu and two daughters when he came out.

“In prison I could only see part of it,” he says.

“The Palestinian narrative is based on the heroic prisoner,” Makhoul observes. “I think the heroes are the families.”

“If you ask a prisoner, he or she wants to be free and not a hero,” he says. “It is the same for the family.”

“The problem with the hero narrative is that it’s okay to suffer,” Makhoul adds. “It becomes like suffering is a profession. But I think we don’t want to suffer.”

Often the focus is on “veteran prisoners” – Makhoul notes that one recently released friend had spent 18 years in prison, and some Palestinians have been behind bars for almost four decades.

But he emphasizes that even two to five years is a very long time, with enormous impacts on the prisoner and their family.

Too often, he says, “we look just to count the years more than how to shorten the prison time.”

Makhoul points to how imprisonment causes many problems in wider society. Families lose income and women become sole providers and caregivers. And it can lead to early marriage.

“I know of 16-year-old girls, young women, who married because their father is in prison, because they need protection,” he says.

“It is not a matter of just the prisoner and go every two weeks to visit him or her.”

“One veteran prisoner told me that it is better to live one month with the illusion that I can be outside than to be in prison for this month without this illusion,” Makhoul says. “The illusion became the dream.”

In the past there were negotiations between Israel and Palestinian leaders on prisoner exchanges, but now the situation is not promising.

He sees this despair more broadly.

“People are ready to do something to change the situation if they feel hope,” Makhoul says. “But they are now hopeless.”

But for Makhoul this is no reason to give up hope. He is encouraged that enough people still believe in Palestine’s liberation.

“I think Israel will not be able to do what it wants.”

Israel has been demanding a halt to Palestinian Authority financial support to prisoners’ families.

Israel and its lobby call this money “support for terrorism.”

Israel has withheld tax money it collects on behalf of the PA as a punishment, leading to a serious funding crisis.

But Makhoul responds that “the money is not meant for the prisoner, it is for the family.”

“It is not a political matter,” he adds. “It is welfare support to the family like welfare states in Europe do.”

Yigal Amir, the murderer of Israeli Prime Minister Yitzhak Rabin, was even allowed to get married and start a family while in prison.

For Makhoul the assault on payments to the families is just another part of Israel’s effort to “delegitimize the Palestinian struggle.”

“They want to create a people that gives up all the time, that raises their hands without any rights,” he says.

Makhoul says he supported hunger strikes while he was in prison, a tool Palestinians have used for decades to resist their jailers.

“Strikes are part of prison life and also part of the myth of the heroic Palestinian prisoner.”

But he adds that there is much debate about tactics among prisoners and strikes are not always “the most efficient tool.”

He says the 2017 mass hunger strike took place inside the prisons without coordinated mass action outside, and even without consensus among the prisoners.

“It is less influential because the Israelis are using their power outside and inside,” he says. “The connection between inside and outside is crucial, all the time.”

Now on the outside, Makhoul says he doesn’t want to give advice to prisoners still locked up.

“They know what to do, but from my experience in prison I think we have to rethink our strategy of strikes,” he says. “It is not an easy matter, especially when we think of the major split between Fatah and Hamas.”

These and other divisions complicate matters and play into struggles for influence.

“It is possible to rethink the strategy and develop new tools, although it is not easy,” he says. “We had dozens of meetings about it.”

“In prison I got about 1,000 postcards from all over the world, a big part of it is yours,” Makhoul tells me.

Other prisoners would gather around, asking to read the handwritten letters and look at the pictures on the postcards – reminders of the outside world.

Most of the other prisoners could not communicate in English or were not used to sending letters, but they felt good that Makhoul received them.

It was a message for all the prisoners that “there are still people around who are thinking about us,” he says. “It was very important for me too.”

“We discussed solidarity and the need for mutual solidarity. We thought about how to activate the solidarity groups,” Makhoul says. “But from prison it is impossible to do. We need to have that from outside prison.”

While in prison Makhoul read novels about prisons in other countries. He recounts that the Eritrean writer Haji Jaber writes about a prison “inside a big stone with only one entrance. There is no outside.”

And Saudi novelist Abdul Rahman Munif wrote a book about prisons in the Arab world. “He says, why are our enemies’ prisons better than our nation’s prisons, or less bad than ours?”

Those books generated discussions in “our” prison, Makhoul recalls.

Makhoul finds the idea of solidarity focusing on prisoners promising. “What Palestinian prisoners need is a major issue,” he says.

“And what Palestinians in general need is the creation of hope – the recreation of hopes and dreams. There is a need to revive the spirit of liberation.”