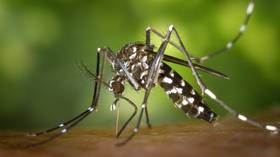 An experimental trial to reduce the mosquito population in Brazil through the deliberate release of 450,000 genetically modified mosquitoes has failed miserably and may have even created a genetic hybrid super species.

The overall goal was to curb the spread of mosquito-borne diseases, such as yellow fever, dengue, chikungunya, and Zika, by releasing half a million OX513A mosquitoes. The insects are a genetically-modified version of the Aedes aegypti mosquito, which combined a breed from Mexico with a breed from Cuba.

The mosquitoes were supposed to contain a dominant lethal gene that would render the first generation of future offspring infertile (while also marking them with a fluorescent green protein gene). Well, as it often does, life found a way.

“The claim was that genes from the release strain would not get into the general population because offspring would die,” said ecologist and evolutionary biologist Jeffrey Powell who conducted a recent study into the efficacy and success of the GM mosquito trial. “That obviously was not what happened.”

The original Oxitec research suggested that just three to four percent of the “infertile” offspring would survive into adulthood and would be too weak to reproduce anyway. These predictions were wrong. Very wrong.

Anywhere from 10 to 60 percent of the mosquitoes analyzed by Powell and his team featured genomes tainted by OX513A. While the scheme apparently worked initially, with a dramatic reduction in the population, it would later completely backfire around the 18-month mark, returning the number of mosquitoes in the area to pre-release levels.

The female population, it turns out, opted not to mate with the weaker, genetically-modified mosquitoes anyway, in a phenomenon known as “mating discrimination,” according to Powell and his team.

Some genetically-modified mosquitoes even showed signs of “hybrid vigor” in which the artificially-introduced genetic diversity actually made the mosquitoes stronger and more resilient, with the possibility of increased resistance to insecticides, Powell and his co-authors warned.

However, an Oxitec spokesperson claims the research contains “numerous false, speculative and unsubstantiated claims and statements about Oxitec’s mosquito technology” claiming instead, in a three-page document, that the paper did not identify any “negative, deleterious or unanticipated effect to people or the environment from the release of OX513A mosquitoes.”

Oxitec also disputes the claim about “mating discrimination” saying it has never occurred in any release of an estimated total of one billion Oxitec male mosquitoes released worldwide.