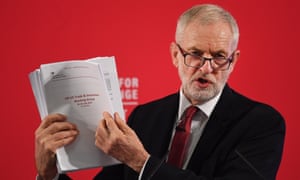 Data about millions of NHS patients has been sold to US and other international pharmaceutical companies for research, the Observer has learned, raising new fears about America’s growing ambitions to access lucrative parts of the health service after Brexit.

US drugs giants, including Merck, Bristol-Myers Squibb and Eli Lilly, have paid the Department of Health and Social Care, which holds data derived from GPs’ surgeries, for licences costing up to £330,000 each in return for anonymised data to be used for research.

Campaigners working to protect the privacy of patients’ medical histories said they were concerned at the lack of transparency that surrounded the sale of licences and a lack of clarity about what the data was being used for.

The most recent accounts of the government organisation that issues the licences, Clinical Practice Research Datalink or CPRD, reveal it received more than £10m in revenue last year.

“Patients should know how their data is used. There should be no surprises. While legitimate research for public health benefit is to be encouraged, it must always be consensual, safe and properly transparent,” said Phil Booth, coordinator of medConfidential, which campaigns for the privacy of health data.

“Do patients know – have they even been told by the one in seven GP practices across England that pass on their clinical details – that their medical histories are being sold to multinational pharma companies in the US and around the world?”

On Saturday, Dr June Raine, chief executive of the Medicines and Healthcare products Regulatory Agency (MHRA), a government body that includes CPRD, said the sale of data under licence to commercial organisations, as well as research bodies such as universities, had been fully compliant with “ethical, information governance, legal and regulatory requirements”. “Rigorous processes” were in place to ensure the privacy of patients, she added.

“Ethically conducted research using CPRD patient data sets has brought enormous benefits to patient care, including providing evidence for the National Institute for Health and Care Excellence (NICE) blood-pressure targets for patients with diabetes, as well as working with universities, regulators and the pharmaceutical industry who research the safety of their medicines,” Raine said.

Last week, a leak of secret government papers about private discussions between UK and US officials over a post-Brexit trade deal showed that the “free flow of data” was a “top priority” for the US.

Boris Johnson’s toxic trade deal with Trump will mean the NHS being cut up and quietly sold off, bit by bit — Jeremy Corbyn, Labour leader

America appears to be pressing for unrestricted access to Britain’s 55 million health records, which are estimated to have a total value of £10bn a year. A minute of one of the meetings says: “On data flows, the critical element highlighted by the US was agreement that no parties will restrict information.” Another US demand is for “data localisation” to be ruled out, meaning the data of NHS patients could be stored on cloud servers abroad.

US ambitions to access UK health markets have become a major issue in the general election campaign, with Labour’s leader, Jeremy Corbyn, repeatedly accusing the Tories of preparing to open up the NHS to US businesses during talks on a post-Brexit trade deal with Washington. Boris Johnson has rejected the claims, saying the NHS is not, and never will be, for sale.

Labour has vowed to review the sale of health data if it wins the election. Corbyn said on Saturday that the revelations proved there was “nothing the Conservatives won’t sell to keep US big business happy”, adding that a government that sold “our most private data can’t be trusted with our NHS”.

“Boris Johnson’s toxic trade deal with Trump will mean the NHS being cut up and quietly sold off, bit by bit,” he said. “This election will decide the future of our health service. While the Tories will use our NHS as a bargaining chip, Labour will pass a binding law to ensure that the NHS is never on the table and give it the funding it desperately needs.”

Booth said there was a lack of transparency over the sale of data, with information about the companies buying it – and the uses to which they put it – not displayed clearly on the relevant government agency sites.

He said there was evidence on CPRD’s website that US companies additional to those featured on a list provided to the Observer (after an official request was made) were using UK data. “Our detailed examination of CPRD’s approved studies shows multibillion-dollar companies like Optum, Pfizer and Sanofi named in multiple studies over the past year, but not on the list of licensed commercial organisations its officials provided to the Observer.

“Such omissions and lack of transparency are deeply concerning. What else don’t we know?”