The Global Debt Crisis and the Privatization of the State

There is a serious health crisis which must be duly resolved. And this is a number one priority.

But there is another important dimension which has to be addressed.

Millions of people have lost their jobs, and their lifelong savings. In developing countries, poverty and despair prevail.

While the lockdown is presented to public opinion as  the sole means to resolving a global public health crisis,  its devastating economic and social impacts are casually ignored.

The unspoken truth is that the novel coronavirus provides a pretext to powerful financial interests and corrupt politicians to precipitate the entire World into a spiral of  mass unemployment, bankruptcy and extreme poverty.

This is the true picture of what is happening.  Poverty is Worldwide. While famines are erupting in Third World countries, closer to home,  in the richest country on earth: 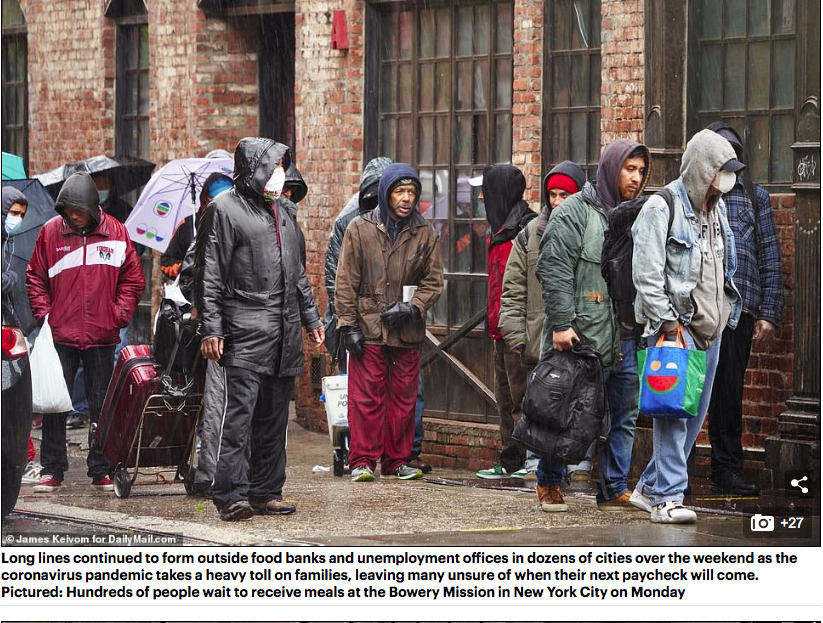 “food is disappearing, ….  in shanty towns, too scared to go out, walking home or trapped in the street crackdowns,

In India there have been 106 coronavirus deaths as of today, to put things in perspective 3,000 Indian children starve to death each day”

From Mumbai to New York City. It’s the “Globalization of Poverty”.

Production is at a standstill.

Starvation in Asia and Africa. Famine in the U.S.

And what is happening in Italy?

People are running out of food. Reports confirm that the Mafia rather than the government “is gaining local support by distributing free food to poor families in quarantine who have run out of cash”. (The Guardian)

This crisis combines fear and panic concerning the COVID-19 together with a sophisticated process of economic manipulation.

Let us first examine the impacts pertaining to the developing countries.

Developing Countries. The IMF’s “Economic Medicine” and the Globalization of Poverty

Is the coronavirus crisis part of a broader macro-economic agenda?

Since the early 1980s, “strong economic medicine” was imposed on indebted developing countries under what was called the “structural adjustment program” (SAP).

From 1992 to 1995, I undertook field research in India, Bangladesh and Vietnam and returned to Latin America to complete my study on Brazil. In all the countries I visited, including Kenya, Nigeria, Egypt, Morocco and The Philippines, I observed the same pattern of economic manipulation and political interference by the Washington-based institutions. In India, directly resulting from the IMF reforms, millions of people had been driven into starvation. In Vietnam – which constitutes among the world’s most prosperous rice producing economies – local-level famines had erupted resulting directly from the lifting of price controls and the deregulation of the grain market. (Preface to the Second Edition of the Globalization of Poverty, 2003)

The hegemony of the dollar was imposed. With mounting dollar denominated debt, eventually in most developing countries the entire national monetary system was “dollarized”.

In Nigeria starting in the 1980s, the entire public health system had been dismantled. Public hospitals were driven into bankruptcy. The medical doctors with whom I spoke described the infamous structural adjustment program (SAP) with a touch of humor:

“we’ve been sapped by the SAP”, they said, our hospitals have literally been destroyed courtesy of the IMF-World Bank.

Today, the mechanism for triggering poverty and economic collapse is fundamentally different and increasingly sophisticated.

The ongoing 2020 Economic Crisis is tied into the logic of the COVID-19 pandemic: No need for the IMF-World Bank to negotiate a structural adjustment loan with national governments.

What has occurred under the COVID-19 crisis is a “Global Adjustment” in the structure of the World economy. In one fell swoop this Global Adjustment (GA) triggers a Worldwide process of bankruptcy, unemployment, poverty and total despair.

How is it implemented? The lockdown is presented to national governments as the sole solution to resolve the COVID-19 pandemic. It becomes a political consensus, irrespective of the devastating economic and social consequences.

No need to reflect or analyze the likely impacts. Corrupt national governments are pressured to comply.

The partial or complete closing down of a national economy is triggered through the enforcement of  so-called “WHO guidelines” pertaining to the lockdown, as well as to trade, immigration and transportation restrictions, etc.

Powerful financial institutions and lobby groups including Wall Street, Big Pharma, the World Economic Forum (WEF) and the Bill and Melinda Gates Foundation were involved in shaping the actions of the WHO pertaining to the COVID-19 pandemic.

The lockdown together with the curtailment of trade and air travel had set the stage. This closing down of national economies was undertaken Worldwide starting in the month of March,  affecting simultaneously a large of number of countries in all major regions of the World.  It is unprecedented in World history.

Why did leaders in high office let it happen? The consequences were obvious.

This closing down operation affects production and supply lines of goods and services, investment activities, exports and imports, wholesale and retail trade, consumer spending, the closing down of schools, colleges and universities, research institutions, etc.

In turn it leads almost immediately to mass unemployment, bankruptcies of small and medium sized enterprises, a collapse in purchasing power, widespread poverty and famine.

What is the underlying objective of this restructuring of the global economy?  What are the consequences? Cui Bono?

It is neoliberalism to the nth degree.

In one fell swoop (in the course of the last months) the COVID-19 crisis has contributed to impoverishing a large sector of the World population.

And Guess who comes to the rescue? The IMF and the World Bank:

The IMF Managing Director Kristalina Georgieva has casually acknowledged that the World economy has come to a standstill, without addressing the causes of economic collapse.

How does she intend to “protect the World economy”?

At the expense of the national economy?

At first sight this appears to be “generous”, a lot money. But ultimately it’s what we might call “fictitious money”, what it means is:

“We will lend you the money and with the money we lend you, you will pay us back”.(paraphrase). 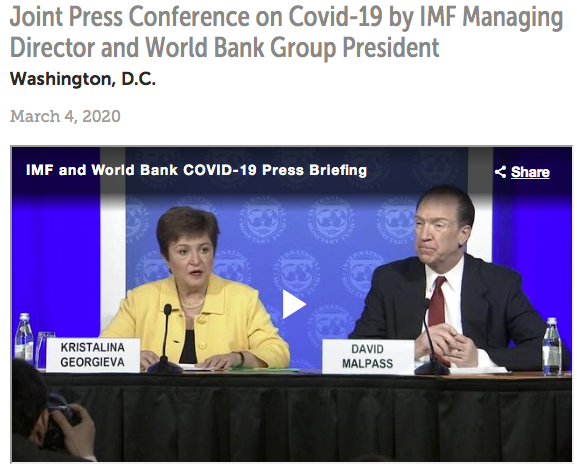 The IMF is explicit. In one of its lending windows, the Catastrophe Containment and Relief Trust, which applies to pandemics, generously,

“provides grants for debt relief to our poorest and most vulnerable members.”

Nonsensical statement: it is there to replenish the coffers of the creditors, the money is allocated to debt servicing.

No conditions on how you spend the money. But this money increases the debt stock and requires reimbursement.

The countries are already in a straight-jacket. And the objective is that they comply with the demands of the creditors.

That’s the neoliberal solution applied at a global level: No real economic recovery, more poverty and unemployment Worldwide. The “solution” becomes the “cause”. It initiates a new process of indebtedness. It contributes to an escalation of the debt.

The more you lend, the more you squeeze the developing countries into political compliance. And ultimately that is the objective of the failing American Empire.

The unspoken truth is that this one trillion dollars ++ of the Bretton Woods institutions is intended to drive up the external debt.

In recent developments, the G20 Finance ministers decided to “put on hold”,  the repayment of debt servicing obligations of the World’s poorest countries.

The cancellation of debt has not been envisaged. Quite the opposite. The strategy consists in building up the debt.

It is important that the governments of developing countries take a firm stance against the IMF-World Bank “rescue operation”.

The Global Debt Crisis in the Developed Countries

An unprecedented fiscal crisis is unfolding at all levels of government. With high levels of unemployment, incoming tax revenues in developed countries are almost at a standstill.  In the course of the last 2 months, national governments have become increasingly indebted.

In turn, Western governments as well as political parties are increasingly under the control of  the creditors, who ultimately call the shots.

All levels of governments have been precipitated into a debt stranglehold. The debt cannot be repaid. In the US, the federal deficit “has increased by 26% to $984 billion for fiscal 2019, highest in 7 years”.  And that is just the beginning.

In Western countries, a colossal expansion of the public debt has occurred. It is being used to finance the “bailouts”, the “handouts” to corporations as well as “the social safety nets” to the unemployed.

The logic of the bailouts is in some regards similar to that of the 2008 economic crisis, but on a much larger scale. Ironically, in 2008, US banks were both the creditors of the US federal government as well as the lucky recipients: the rescue operation was funded by the banks with a view to  “bailing out the banks”. Sounds contradictory?

The Privatization of the State

This crisis will  eventually precipitate the privatization of the state. Increasingly, national governments will be under the stranglehold of Big Money.

Crippled by mounting debts, what is at stake is the eventual de facto privatization of the entire state structure, in different countries, at all levels of government, under the surveillance of powerful financial interests. The fiction of  “sovereign governments” serving the interests of the electors will nonetheless be maintained.

The first level of government up for privatization will be the municipalities (many of which are already partially or fully privatized, e.g. Detroit in 2013). America’s billionaires will be enticed to buy up an entire city.

Several major cities are already on the verge of bankruptcy. (This is nothing new).

Is the city of Vancouver up for privatization?: “the mayor of Vancouver has already indicated that he feared the bankruptcy of his city.” (Le Devoir, April 15, 2020)

In America’s largest cities, people are simply unable to pay their taxes: The debt of New York City for fiscal 2019 is a staggering $91.56 billion (FY 2019) an increase of 132% since FY 2000. In turn personal debts across America have skyrocketed.

The lockdown impoverishes both the developed and developing countries and literally destroys national economies.

It destabilizes the entire economic landscape. It undermines social institutions including schools and universities. It spearheads small and medium sized enterprises into bankruptcy.

What kind of World awaits us?

A diabolical “New World Order” in the making as suggested by Henry Kissinger? (WSJ Opinion, April 3, 2020):

“The Coronavirus Pandemic Will Forever Alter the World Order”

Recall Kissinger’s historic 1974 statement: “Depopulation should be the highest priority of US foreign policy towards the Third World.” (1974 National Security Council Memorandum)

The political implications are far-reaching.

What kind of government will we have in the wake of the crisis?

There is a lot of misunderstanding regarding the nature of this crisis.

Several progressive intellectuals are now saying that this crisis constitutues a defeat of neoliberalism. “It opens up a new beginning”.

Some people see it as a “potential turning point”, which opens up an opportunity to “build socialism” or “restore social democracy” in the wake of the lockdown.

The evidence amply confirms that neoliberalism has not been defeated. Quite the opposite.

Global capitalism has consolidated its clutch. Fear and panic prevail. The State is being privatized. The tendency is towards authoritarian forms of government.

These are the issues which we must address.

That historical opportunity to confront the power structures of global capitalism, –including the US-NATO military apparatus– remains to be firmly established in wake of the lockdown.

Url of this article:
https://www.globalresearch.ca/towards-a-new-world-order-the-global-debt-crisis-and-the-privatization-of-the-state/5709755

One thought on “Towards A New World Order?”