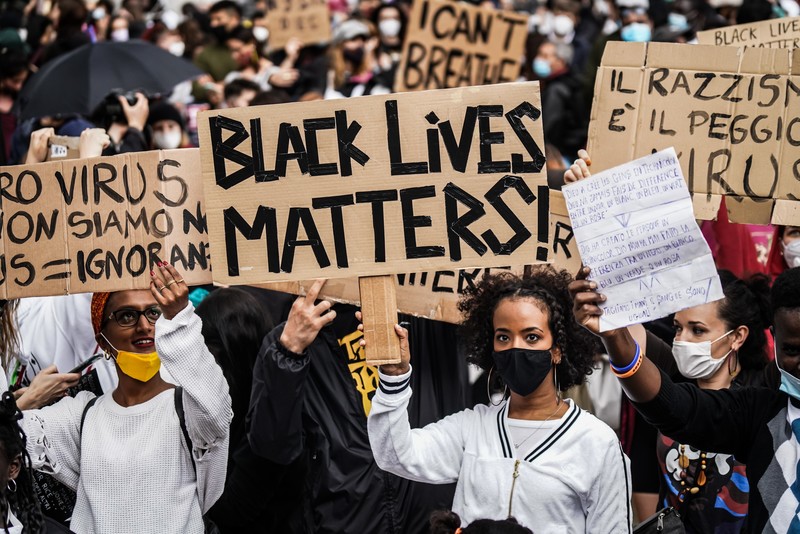 Israel lobby groups have long seen the Black Lives Matter movement as a threat and have tried both to disrupt and co-opt it.

As protests sweep the world in the wake of the Minneapolis police killing of George Floyd, Israel lobby groups are struggling to appear on board with the Black Lives Matter movement while upholding their support for Israel’s racism.

While some are trying to jump on the anti-racism bandwagon, others are dispensing with subtlety altogether.

Morton Klein, the head of the Zionist Organization of America, demanded that the Southern Poverty Law Center, a civil rights organization, “immediately put Black Lives Matter on their list of hate groups.”

As well as his anti-Black racism, Klein’s tweet was notable for its anti-Semitism – promoting the common right-wing calumny that Jewish billionaire George Soros is the world’s puppet master.

It’s no surprise to find a Zionist promoting such anti-Semitism – the conspiracy theory was originated by two of the Israeli prime minister’s key electoral advisers.

And in the UK, Sussex Friends of Israel could not hide its anger that a celebratory group of protesters in Bristol finally removed a statue of Edward Colston, a notorious 17th century slave trader responsible for the deaths of tens of thousands of Africans abducted from their homeland.

The moment a statue of slave trader Edward Colston toppled into Bristol’s harbour. ‘It’s what he deserves. I’ve been waiting all my life for this moment’ someone told me in the moments after. pic.twitter.com/6juqVrsJ6V

First they came for the statues….

How to be an anti-racist racist

But for the Anti-Defamation League, a major Israel lobby group that masquerades as a civil rights organization, it’s a tougher balancing act.

In the US context, many Israel lobby groups want to appear as progressive and anti-racist, even though – as Zionist organizations – they are deeply racist against Palestinians.

Zionism is racism because it is the belief that Jews from anywhere in the world have a right to settle in historic Palestine and maintain a Jewish-majority state there that trumps any rights of the indigenous Palestinian people.

This claimed superiority is enshrined in Israeli constitutional law.

Virtually all people who identify as Zionists oppose Palestinian refugees returning to the homes from which they were expelled by Zionists, solely and exclusively because they are not Jews.

Zionists typically argue that Palestinians – merely by being born and living in their homeland – constitute a “demographic threat” to Israel.

The ADL shares this repugnant view, arguing that Palestinian refugees should not be allowed to come home because an “influx of millions of Palestinians into Israel would pose a threat to its national security and upset the country’s demographic makeup.”

The ADL, moreover, has a history of supporting white supremacy: In the 1980s, the group notoriously spied on US anti-apartheid activists for South Africa’s racist regime.

Israel lobby groups have long seen the Black Lives Matter movement as a threat to support for Israel.

Alarm bells rang at Israel lobby organizations in 2016 when the Movement for Black Lives – a coalition of dozens of organizations – endorsed the Palestinian call for a boycott of Israel.

Yet reading the sensitivity of the present moment, the Anti-Defamation League and similar groups are working hard to co-opt BLM rather than condemn it outright.

Even AIPAC, the powerful Israel lobby group on Capitol Hill, is getting into the act, tweeting out that in the wake of Floyd’s killing, “the scourge of racism, intolerance and inequality must end.”

On the eve of George Floyd’s funeral, we join with millions of Americans who continue to mourn his murder. His death is a shattering reminder of the injustice & inequities that Black Americans still endure in our society.

The scourge of racism, intolerance & inequality must end. pic.twitter.com/m9YxLqZ1Lb

In recent days, the Anti-Defamation League’s Twitter feed has put out a stream of support for the protests calling for an end to police violence and “reforms.”

“Our message is simple: racism is killing Black people in America. And we are done dying.” A must read from @NAACP President & CEO @DerrickNAACP. https://t.co/2YSwp3bj6Z

The ADL is making a concerted effort to appear as an ally.

Yet while urging people to say the names of victims of racist US police violence, the ADL remains studiously silent about the countless Palestinian victims of Israeli military and police violence – most recently the slaying of Iyad Hallaq, an autistic man who was gunned down as he pleaded for his life while he was on his way to his special education school in occupied East Jerusalem with his carer.

The killing of Hallaq was so egregious and horrifying – even by Israeli standards – that the Israeli government has issued a disingenuous “apology”, and the US ambassador to Israel expressed his regret.

My heartfelt condolences to the family of #EyadHallaq, an unarmed #Palestinian, shot and killed yesterday in #Jerusalem. A tragedy that should and could have been avoided! The authorities should swiftly investigate and make sure such incidents are not allowed to happen.

The ADL messaging in favor of reform is part of a strategy outlined by Israel lobby groups in recent years to forestall growing solidarity between campaigners for Palestinian rights and anti-racism activists, especially since the 2014 Ferguson uprising sparked by the police killing of Black teenager Michael Brown.

Last week, the American Jewish Committee, a prominent Israel lobby group, complained that “Your viewpoint on Israel has almost become a litmus test for whether you are progressive enough.”

But this is a long-running worry for Israel lobby groups who have seen progressive support drain away.

In 2017, a leaked report written by the ADL and the Reut Institute, an influential Israeli think tank, bemoaned how campaigners have successfully been “able to frame the Palestinian struggle against Israel as part of the struggle of other disempowered minorities, such as African Americans, Latinos and the LGBTQ community.”

And last year, the Reut Institute and the US-based Jewish Council for Public Affairs issued another report advising Israel lobby groups on how to divide the left so as to weaken growing ties of Palestine solidarity.

That report focused in particular on the perceived threat of intersectionality.

The term intersectionality was coined by Black feminist scholar Kimberlé Crenshaw in 1989 to explain how individuals or communities experience overlapping systems of oppression based on gender, race, ethnicity and other socioeconomic factors.

The report warned that intersectionality “undermines Jewish communities’ agendas, including support for the State of Israel.”

The report noted with dismay how Israel’s 2014 attack on Gaza that killed more than 2,200 Palestinians, including 550 children, coincided with the uprising in Ferguson, Missouri.

This generated strong expressions of solidarity symbolized by the hashtag #Palestine2Ferguson.

The 2014 Ferguson uprising was, according to the report, “a strategic benchmark in the evolution of anti-Israel agendas within intersectional spaces.”

Now, the Jewish Council on Public Affairs is taking its own advice: Last week it put out a statement along with other Jewish communal groups pledging to support Black communities to “institute sweeping changes to law enforcement and end systemic racism.”

Yet far from supporting anti-racist movements, the Jewish Council on Public Affairs smears the Palestinian rights movement as anti-Semitic.

It has supported repressive legislation to try to stop the growth of BDS – the nonviolent boycott, divestment and sanctions movement for Palestinian rights that is inspired by the successful global campaign to help end apartheid in South Africa.

The Anti-Defamation League is also no more credible as a partner against racism, especially US police brutality.

It has been a major player in the industry of bringing US police on junkets to Israel for “counterterrorism” and other kinds of joint training.

That has become a central focus of the Deadly Exchange campaign which aims to end the links between US and Israeli forces of state repression.

A notable example of the shared values of Israeli and American military occupation and policing has come in the wake of the horrifying assault on Martin Gugino, a 75-year-old peace activist in Buffalo, New York.

Two police officers have been charged with felony assault in the attack.

Video shows Gugino being knocked down by riot police on Thursday night, falling to the ground and blood pooling behind his head.

As of Saturday, Gugino remained hospitalized in serious condition.

The Buffalo News asked several “experts” what they thought of the incident.

Maria Haberfeld, a professor at the John Jay College of Criminal Justice in New York City and a former member of the Israeli army and Israeli national police, justified the assault.

“Age in itself does not give you immunity,” Haberfeld added, “anybody from a teenager to a senior citizen can potentially do harm.”

Haberfeld brags that she has “provided leadership training to a number of police agencies.”

The attitude where almost the entire population is a military threat to be met with brutal force has long united American and Israeli elites.

It’s a status quo that Israel lobby groups have reinforced for decades. The lobby’s past and present racism cannot be erased with a few tweets in support of Black Lives Matter.

Israel and its lobby have also demonstrated that where co-optation of Black Lives Matter does not succeed, they are prepared to use the same bully tactics long deployed against the Palestine solidarity movement.

In 2018, Al Jazeera’s leaked undercover documentary The Lobby–USA revealed how the Israeli government and its lobby worked to disrupt the Black Lives Matter movement in retaliation for Black solidarity with Palestine.

It also revealed how The Israel Project, a now defunct organization, pulled strings behind the scenes to get a Black Lives Matter fundraiser at a New York City nightclub canceled.