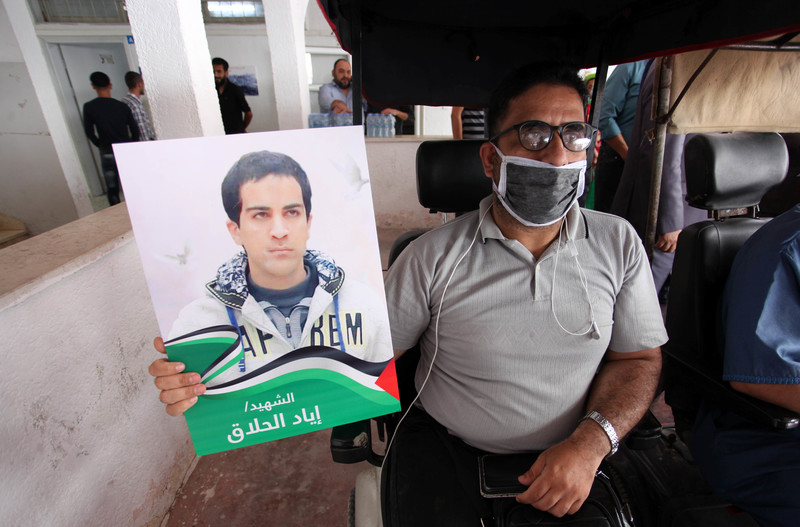 The Israeli police killing of a Palestinian man with disabilities in Jerusalem last month amounts to an extrajudicial execution, the group Al-Haq stated in an urgent appeal to United Nations human rights experts on Tuesday.

Iyad Hallaq “posed no threat to the lives of those around him at the time” of his slaying in Jerusalem’s Old City on 30 May. His killing is a war crime giving rise to “individual criminal responsibility,” the Palestinian human rights group added.

Hallaq had “an intellectual disability with autistic traits that limited his interaction with the outside world and physical disabilities that affected his hearing and movement,” Al-Haq said.

The 31-year-old “had previously shared his fears about the Israeli police with his parents,” Al-Haq, which investigated his killing, stated in its urgent appeal.

Hallaq was on his way to the Elwyn Center, a school for persons with disabilities that he had attended daily for six years, when Israeli Border Police called on him to stop walking.

Due to his fear of the police, Hallaq began running towards his school.

Warda Abu Hadid, Hallaq’s caregiver, saw Hallaq running and shouted at the police, telling them in Arabic and Hebrew that Hallaq was disabled.

The police, who claimed to have believed that Hallaq was armed, ignored Abu Hadid’s calls and shot Hallaq with live fire as he continued running.

When an officer asked Abu Hadid, “Where is the pistol?” the caregiver stated again that Hallaq was disabled. Shot in the foot, Hallaq pointed at Abu Hadid and told the officer she was his teacher.

“Then, after five minutes of apparent premeditation, the Israeli Border Police officer shot three live bullets at Iyad, from a distance not exceeding five meters.”

Hallaq was holding nothing in his hands when he was killed, according to Al-Haq’s investigation.

Twenty minutes later, after the director of the Elwyn Center arrived at the scene and said that Hallaq was one of her students, Israeli forces allowed an ambulance to reach the injured man.

Hallaq’s caregiver, Abu Hadid, was assaulted by police and taken to a nearby station, where she was forced to take off her head covering and clothing.

Abu Hadid, who had a police gun pointed at her head in the moments leading up to Hallaq’s fatal shooting, was left “shivering and in a state of hysteria, amounting to prohibited ill-treatment,” Al-Haq stated.

Meanwhile, Israeli forces raided the Hallaq family’s home, searching it and assaulting his family members. It was then that the family was informed that Hallaq had been killed.

Israel has withheld surveillance camera footage from the area where Hallaq was killed and a gag order was imposed on the Hallaq family’s lawyer to prevent information about court proceedings from being shared with the public, according to Al-Haq.

The willful killing of Hallaq “entails the individual criminal responsibility” of the perpetrators of his killing, “as well as that of Israeli military and civilian officials who drafted and approved Israel’s rules of engagement for the use of live fire,” Al-Haq stated.

The group called for third states to “activate universal jurisdiction mechanisms” and called for “the immediate opening” of an investigation by the International Criminal Court to hold Israel accountable.

Benjamin Netanyahu, Israel’s prime minister, decried the killing as “a tragedy” and urged for an “complete investigations into this matter.”

However, human rights groups have long dismissed Israel’s self-investigations as whitewashing mechanisms, the true purpose of which is to discourage international judicial scrutiny.

For example, Israel absolved itself over the killing of Ibrahim Abu Thurayya, a double-amputee who was shot during protests in the Gaza Strip in December 2017.

Occupation forces killed several other Palestinians with disabilities during the Great March of Return protests that were launched in Gaza a few months after Abu Thurayya was killed.

One of them was Fadi Abu Salmi who, like Abu Thurayya, had lost his legs during Israeli airstrikes years earlier.

He was shot in the chest while sitting in his wheelchair under a tree with friends during Great March of Return protests on 14 May 2018.

A UN commission of inquiry found that Abu Salmi “did not pose an imminent threat of life or injury to [Israeli] soldiers at the time he was killed.”

Israel systematically resorts to excessive use of force, including against Palestinians with disabilities, according to Al-Haq.

Ten Palestinians with disabilities, “five of whom had psychosocial, intellectual or developmental disabilities,” were killed by Israeli forces in 2018, according to the group.

Among them was Muhammad Habali, who was shot while walking away from the direction of soldiers’ fire during a raid on the West Bank city of Tulkarm.

Al-Haq stated at the time that Habali “was born with a mental disability, which left him with difficulties ecognizing his surroundings and identifying threats and risk consequences.”

Video shows that Habali posed no conceivable threat to anyone when he was killed.